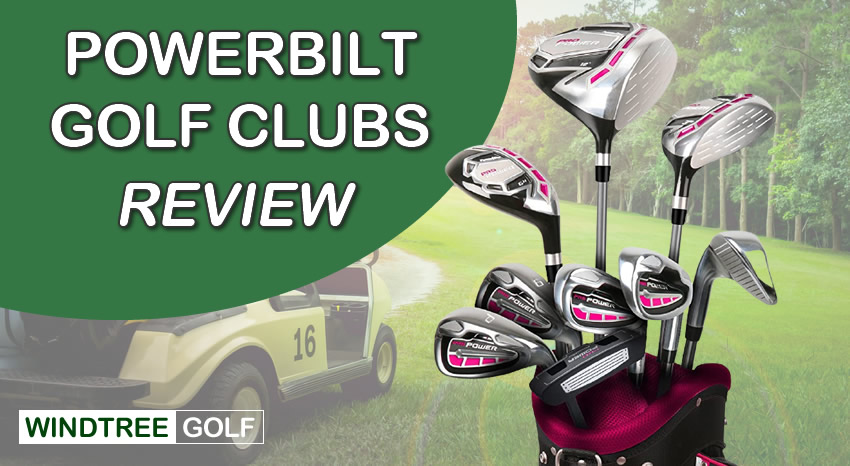 Although not one of the most recognizable brands in the world of golf today, PowerBilt golf has a long and impressive history within the sport.

Founded in 1916, PowerBilt has provided golf clubs for major champions over the years, but the brand has evolved and now caters to beginner golfers and higher handicappers.

This article reviews some of PowerBilt’s current golf clubs, looking at their key features and pros and cons to help you get an idea of whether or not they’re suitable for your game.

We then round things off by answering some PowerBilt FAQs, which provide you with a little bit more information about the brand. 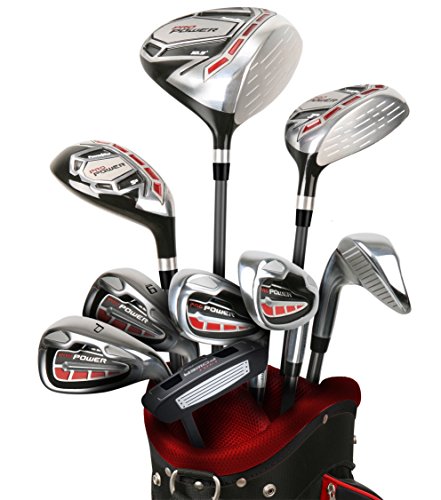 Ideally suited to those looking for an affordable core set of new clubs, the Pro Power Package includes:

The clubs are made with an Apollo graphite steel shaft. The driver has a loft of 10.5-degrees and is suitable for male golfers of all ages and abilities.

As a whole, the clubs are particularly attractive to beginner golfers, as they come as an all-in-one set at a very reasonable price.

The PowerBilt Pro Package is best suited to beginner golfers and those with a +20 handicap looking for an affordable, all-in-one set of golf clubs that look great and play well.

But given the restrictions, you might need to make a couple of additional purchases to give yourself greater variety out on the course. 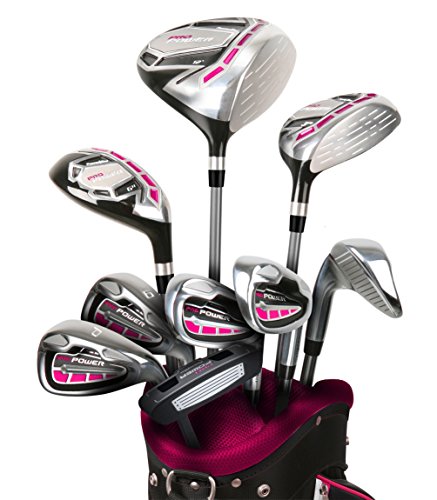 The women’s PowerBilt Pro Power set reflects the men’s set as described above but has some subtle differences.

The following is included in the women’s set:

The women’s clubs also come with graphite Apollo shafts and weigh in at just six pounds, making them relatively light to play.

The driver comes with a 12-degree loft, which is slightly more forgiving than the 10.5 degrees standard in the men’s version of the set.

Like the men’s version of the Pro Power set, these clubs are best suited to beginner and perhaps intermediate women golfers.

Although the set excludes long irons, you can always use the money you’ve saved on the set to purchase a couple of irons in addition. 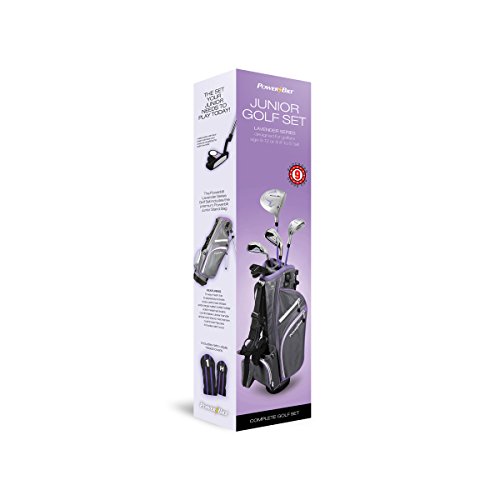 PowerBilt’s junior clubs are color-coded, making it nice and easy to select the right-sized clubs for junior players.

They are categorized as follows:

As junior golf club sets go, PowerBilt has made things nice and straightforward, as you can easily pick up the right set for your kids’ age group.

They all come with a stand bag and headcovers and are the perfect option for young golfers looking to get into the game.

These clubs are good for young golfers looking to get into the game for the first time.

They’re perfectly suited to beginners, lightweight, attractive, and have everything that junior players just starting out would need. 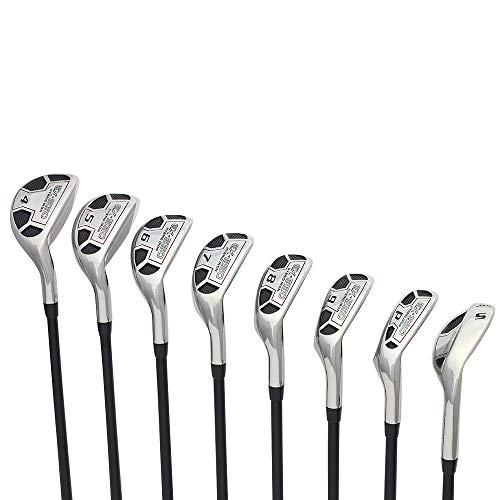 PowerBilt’s Hybrid iron set is attractive to any golfer who struggles with iron play and wants to increase their accuracy and precision.

The enclosed hollow cavity makes these irons exceptionally forgiving, and the graphite shafts make them soft to the feel. Included in the set are:

With their EX-550 hybrid irons, PowerBilt has brought an excellent hybrid set to the market that more than competes with the biggest brands in golf at a fraction of the price.

Although they don’t come with headcovers, you can add them at checkout for a fee.

PowerBilt’s hybrid iron set is best suited to a beginner or intermediate golfer who struggles with the precision and accuracy of their iron play.

Thanks to the cavity backs, the EX-550 hybrid irons are much easier to hit than bladed irons. 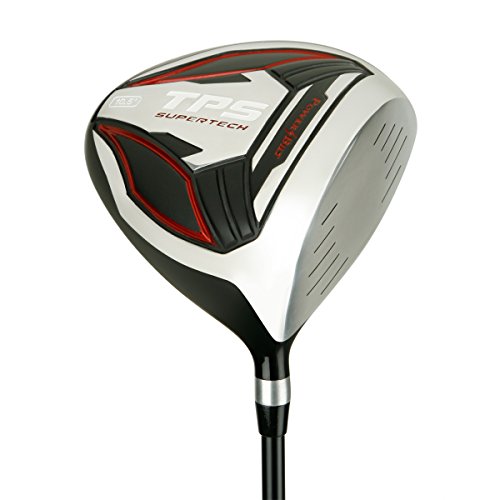 When you consider the fact that the PowerBilt TPS Supertech driver is available for just under $100, it’s hard not to be impressed by its features.

With 10.5 degrees of loft and 460cc volume (the maximum permitted by the USGA), the Supertech increases confidence on the tee and reduces slicing.

The driver looks great and is designed to be more manageable for beginners than many off-the-shelf drivers from more recognizable brands.

Related Article  Where are TaylorMade Golf Clubs Made? - Solved!

While you might not get as much distance out of the PowerBilt driver, it will undoubtedly help with your accuracy.

There’s no question that the PowerBilt Supertech driver is built with beginners in mind.

With a high degree of loft and big head volume, it’s a forgiving driver that is easier to hit than those manufactured by some of the more prominent brands in the sport.

So, if you’re looking for an economical and easy-to-hit driver, the PowerBilt Supertech driver could be for you.

Here you can find answers to the most commonly asked questions about PowerBilt Golf.

Is PowerBilt Golf Still in Business?

Yes, PowerBilt golf is still in business, and most of their clubs are retailed via Amazon.

PowerBilt is one of the oldest brands in golf, first producing golf clubs in 1916.

In 2016, Hilco Streambank acquired the PowerBilt brand that was previously owned by Hillerich and Bradsby.

Working with eight licensees on six continents, Hilco Streambank has outsourced the manufacturing of PowerBilt golf clubs in the United States to Hireko Golf, as explained above.

PowerBilt is widely regarded as a manufacturer of good quality golf clubs that are suitable for beginners and higher handicap players.

PowerBilt also has a rich and proud history of being used on the PGA Tour. Their clubs have been used to win eight major championships and 140 total tour victories.

The last major victory came in 1987 when Larry Mize won the Masters playing with PowerBilt clubs.

But despite the historical prevalence of PowerBilt clubs being played at the highest level of the game, in recent decades, the brand has lost its way somewhat and is now positioned at the lower end of the market.

Do Pros Use PowerBilt Clubs?

As alluded to above, pros have used PowerBilt clubs to win major championships in the past.

The first pro to use PowerBilt clubs to win a major was Olin Dutra, who won the US Open in 1934.

Since then, the likes of Bobby Nichols, Charles Coody, and Fuzzy Zoeller have used PowerBilt clubs at the pinnacle of the game and have won major championships in the process.

PowerBilt golf clubs have a long and prestigious history and have been around for more than 100 years.

They have also been used by professionals in the past, as they’ve claimed major championship titles, such was the brand’s popularity in decades past.

As we have introduced, PowerBilt golf clubs in the present day are more suitable for beginners and higher handicappers, and their men’s, women’s, and junior clubs all represent excellent value for those new to the game.

If PowerBilt was good enough for the likes of Fuzzy Zoeller and Larry Mize, then the brand should be more than acceptable for any player just starting their golfing career.