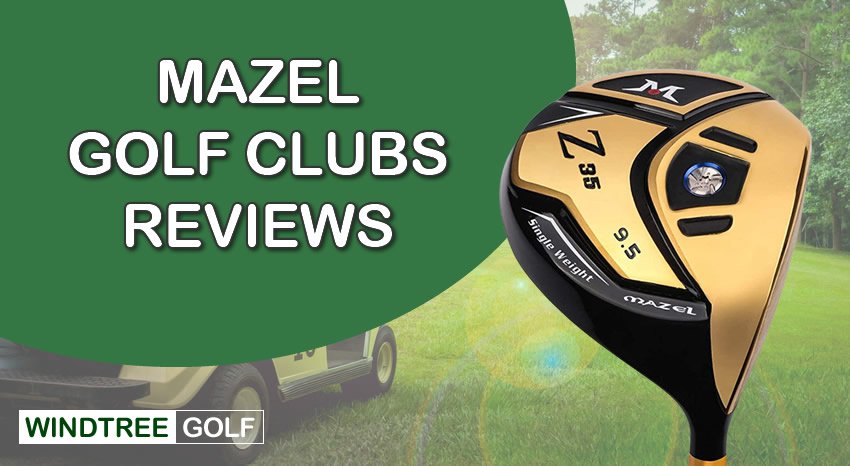 When it comes to golf club manufacturers, you’re truly spoiled for choice. In recent years, so many brands have emerged as viable options if you’re looking to buy golf clubs that don’t cost the earth.

One such brand is Mazel, known predominantly for its single-length irons and gold titanium driver. But are Mazel golf clubs any good? Who are they suitable for? And where are they made?

We’ve put together this insightful Mazel golf clubs reviews guide, so you can decide for yourself whether this lesser-known brand is well suited to your game.

Are Mazel Golf Clubs Any Good?

Yes, Mazel golf clubs are a great option for beginners and high-mid handicappers who are looking for an affordable set of game improvement clubs. Made to a high spec and featuring awesome designs, there’s a lot to love about Mazel’s range of golf clubs.

You can equip your entire golf bag with Mazel clubs, as their range includes a driver, fairways, hybrids, irons, wedges, and putters. We love the unique and colorful style of the clubs, as well as the innovative designs. 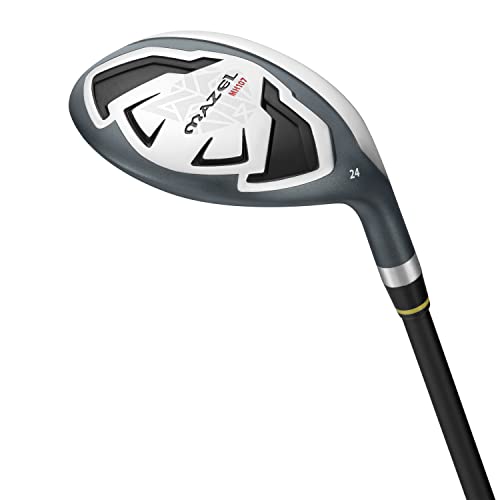 Below, we take a look at these clubs in more detail to help you decide if they’re a decent choice for you.

What are Mazel Single-Length Irons?

Mazel’s single-length irons are built with recreational golfers in mind and are extremely forgiving, thanks to their generous cavity backs. The fact that all of the clubs are the same length makes them in theory, easier to hit.

The beauty of one-length clubs is that you don’t need to adjust your setup and can hit a five iron the same way you hit a nine iron. With conventional clubs, you have to change the way you address the ball to ensure you hit it correctly. This isn’t the case with single-length irons and is their biggest appeal. 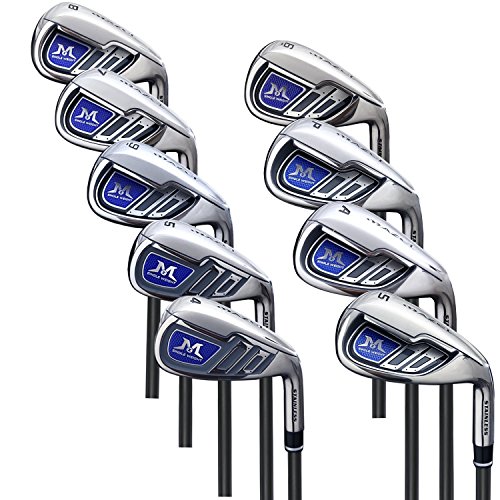 Mazel’s single-length iron set includes clubs from a four-iron through to a sand wedge and comes with your choice of graphite or steel shafts, as well as middle, regular, or stiff flex.
Golfers may also like:  Golf Club Ferrules (What Do They Do?)

Choosing the composition of your shafts provides you with more control over your clubs and fans Mazel irons are suitable for various swing types.

Given that single-length irons have attracted significant attention in recent times, Mazel’s range is impressive and well worth considering if you’re planning to make the switch.

What About Mazel Golf Drivers?

Mazel’s Titanium golf driver is available in golf or black and is built to a high spec with a generous clubface, making it relatively easy to hit. The lightweight titanium 2041 face is much lighter than that used by other brands and comes with a 460cc head.

In other words, the Mazel driver has everything you could possibly want in a driver and is available for around $150, an incredible price when you consider the fact that many of the biggest brands in golf charge $400+ for comparable models.

Popular YouTuber and PGA Tour pro, Rick Shiels conducted an in-depth review of the Mazel driver and was pleasantly surprised by the quality of the club. While it sounds a little tinny and it took him a while to middle the ball, he concluded that the Mazel driver really stood up to its competition and is well worth a try for recreational golfers.

You can choose between 9.5 degrees or 10.5 degrees when you order it online, so be sure to select the right club for your bag. Overall, when you think about the price point and build quality of the Mazel driver, it’s hard not to be impressed. 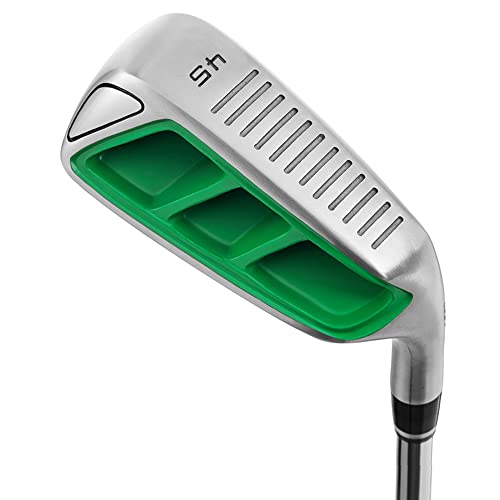 The Mazel chipper comes with a heavy (330g) stainless steel head and a low center of gravity, which helps you get the ball off the ground, reducing the number of fat and thin shots you hit as a result.

It also comes with a wide sole and shallow grooves, which reduces friction and makes it much easier for you to strike underneath the ball. With all things considered, the Mazel chipper is an excellent game improvement club that will help you improve your short game.

Golfers may also like:  Haywood Golf Reviews (Are These Clubs Any Good?)

So, if you struggle to get the ball close to the pin from the fringe or from anywhere around the green, the Mazel chipper will be an ideal addition to your golf bag.

Is Mazel the Same as Square Strike?

The Mazel chipper isn’t the same as Square Strike’s model, but the two clubs are very similar. Both clubs have a 35-inch shaft, which makes the club very much like a putter in terms of length and build. They also both have a weighted clubbed of 330g, which contributes to the ease of use of both clubs.

Another similarity between the two is that they both come with a loft of 68 degrees, which is ideal for those tricky greenside shots. In other words, the Mazel and Square Strike chippers are both good options to add to the bag, but they’re not the same brand.

Other chippers of distinction include Wilson’s Harmonized wedge and the C3i wedge, which are slightly different in design from the Square Strike and Mazel models. All of these clubs are available for less than $100, further highlighting their suitability to recreational golfers.

Basically, if you’re looking to add a chipper to your bag, you should opt for a Mazel or Square Strike; you certainly don’t need both!

Is the Mazel Titanium Driver Accurate?

Mazel’s titanium driver is extremely accurate and is built to a high spec. The driver has been engineered using CNC Cup Face technology, which results in a more generous club face as a result. Recreational golfers can take advantage of this increased sweet spot and are more likely middle drives as a result.

The 460cc head means that the club is capable of accuracy at faster ball speeds, meaning you can rely on the Mazel titanium driver to hit long and straight drives, which is something that all recreational golfers can get on board with.

Another aspect that contributes to the build quality of the Mazel titanium driver is that it comes with a low center of gravity. The weight in the clubhead is towards the back and away from the crown, which enables you to hit the ball higher without compromising on a great deal of distance.
Golfers may also like:  Yonex Golf Clubs (7 Key Facts Before You Buy!)

One final impressive component of this driver is that it comes with an engineered trench surrounding the clubface. This decreases the thickness of the face and increases ball speeds, resulting in significant carry distance.

Overall, these golf clubs are expertly engineered and built to extremely high standards, making them a great option for recreational golfers looking for more consistency and better accuracy off the tee.

Where Are Mazel Golf Clubs Made?

Mazel golf clubs are manufactured in China. The company is based in Xiamen City, Fujian Province in China, which is where the clubs are distributed from. If you buy Mazel clubs directly from the company’s website, you will need to consider things like tax and shipping costs.

However, Mazel also retails its clubs through US based platforms and golf stores, so you don’t need to worry about the intricacies of the shipping process.

While people are understandably attracted to American-made products in this day and age, you will find that the majority of golf club brands sell clubs that have been manufactured in Asia. Even if they’re ‘assembled’ in America, many of the component parts for the club have been sourced abroad.

The fact that Mazel clubs are made in China shouldn’t put you off, as they’re made to high standards and are available for a great price. You will receive a high-quality set of golf clubs for a fraction of the price of some of the biggest brands in golf, which is an attractive proposition for many recreational golfers.

Although Mazel isn’t one of the most recognizable brands in golf, these clubs are definitely worth your consideration if you’re looking for game improvement clubs that won’t break the bank.

Our Mazel golf clubs review shows their single-length irons or impressive titanium driver are superb clubs; you can buy from Mazel safe in the knowledge that the clubs have been widely reviewed and have a great reputation with recreational golfers.

So, don’t get too caught up in the expensive marketing campaigns of the biggest brands in golf, and think about adding Mazel golf clubs to your bag this season.