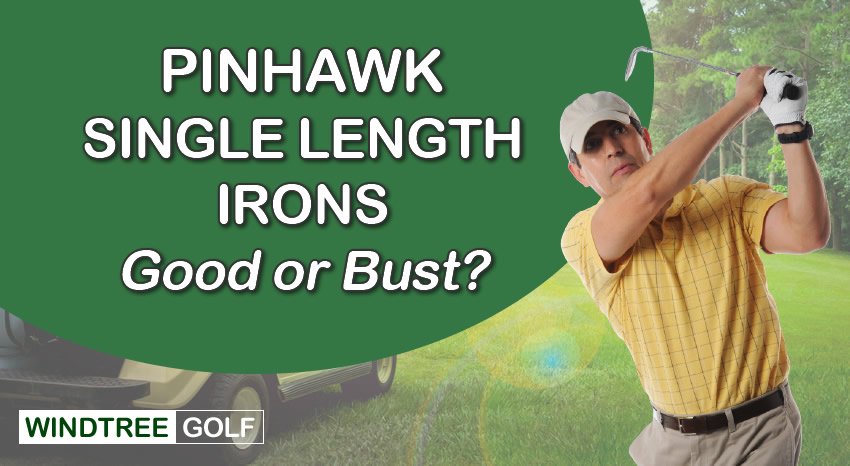 There has been a lot of hype in recent years about single-length golf clubs, primarily due to their reappearance on the PGA Tour (we’re looking at you, Bryson!).

While some people see them as yet another gimmick, the reality is that single-length irons can actually make the game easier for some people, as they enable you to swing each club in the same way.

With this in mind, we take a look at Pinhawk Golf, a manufacturer of single-length irons and hybrids within the game improvement space.

By the end of this piece, you will have all the information you need to decide if this is a brand worth considering if you’re looking to make the switch to Pinhawk single length irons.

What Are Pinhawk Single Length Irons?

Pinhawk’s single length irons are golf clubs that are all made to the same length. In other words, you can swing a Pinhawk nine iron in exactly the same way that you can swing a four iron. This feature is the reason that these types of golf clubs are often talked about in golfing circles and forums.

If you have a one-plane swing or struggle to make the necessary adjustments to transition between your short and long irons, Pinhawk single-length irons might be just what you need to improve your game.

We take a look at these popular irons in detail below.

Are Pinhawk Irons Any Good?

Pinhawk irons are manufactured to a high spec and are built as a game improvement iron, meaning they’re well suited to beginners and high handicappers looking to make some winning adjustments to their current game.

Something unique about Pinhawk’s single-length clubs is that they have been manufactured with extreme permitter weight and a deep undercut, both of which are crucial when it comes to increasing the forgiveness of golf clubs.

Check out this Single Length School YT video on what you can expect out on the course with some Pinhawk single length irons:

Another interesting aspect of the Pinhawk design is that the loft gapping is slightly larger than conventional irons, which typically increase by half an inch or so as you transition between clubs.

This is important because it enables you to achieve similar distances out on the course to those you can hit with conventional irons. Overall, if you’re looking for single-length irons in the game improvement bracket, then Pinhawk is a brand that you need to consider.

What About Pinhawk Single-Length Hybrids?

While Pinhawk is a brand known for its single-length irons, they also manufacture an impressive set of single-length hybrids. Hybrids are typically much easier for recreational golfers to hit, as they’re much more forgiving by design than standard irons, even those with a bulky cavity back.

The hybrids provide you with an excellent opportunity to improve the consistency of your ball striking, and again, they’re all the same length, meaning you don’t have to adjust your stance or swing when you’re lining up your next shot.

Pinhawk’s hybrids are available from 4 through to SW, meaning you can replace your entire golf bag if you want to. If you’ve been struggling to hit your irons and are getting frustrated with the amount of fat and thin shots you continue hitting on the course, it might be worth trying out a set of hybrids to see how you fare.

The added advantage of going with Pinhawk hybrids is that they’re all the same length. As is the case with single-length irons, this design feature means that you don’t have to adjust your stance, theoretically making the game of golf a little bit simpler to play.

Pinhawk vs Cobra – Which is Best?

Pinhawk clubs are in the game improvement space. This means they’re forgiving and compromise a little bit of distance to ensure consistency. For this reason, beginners and high handicappers are better suited to Pinhawk clubs, while Cobra’s single-length irons are ideal for more established players.

Let’s explain the difference between the two in more detail:

If you’ve paid attention to the hype surrounding Bryson DeChambeau in recent times, you will be aware that Cobra is one of the leading manufacturers of single-length irons.

This is because Bryson is actively involved in the R&D process of Cobra clubs, tailoring them to his exact requirements in a move that has led him to be nicknamed “the Scientist.”

The fundamental difference between Pinhawk and Cobra single-length irons is that they’re designed with different types of players in mind.

While some Cobra clubs do fall into the game improvement bracket, their single-length irons are manufactured with competent, lower handicap players in mind.

Overall, both brands make great single-length irons, but they target slightly different sections of the market, as explained above.

Pinhawk Golf is a privately owned company based in the United States. There isn’t a great deal of information available about the owners, who are referred to as Aaron and Dave on the company’s official website.

The founders have been involved in the golf industry for two decades and were inspired to start manufacturing Pinhawk clubs after Tommy Armour’s single-length irons hit the industry in the eighties.

The company is based in Girard, Pennsylvania, but they don’t have a brick-and-mortar retail outlet or office that you can contact directly. This is because Pinhawk is not a direct-to-consumer brand, and they only sell clubs via distributors.

In spite of the dearth of information out there about the ownership of Pinhawk golf, it’s difficult to argue with the excellent reviews that the company has received over the years.

Pinhawk’s single-length irons are widely regarded as among the best single-length game improvement clubs on the market and are a great option for beginner golfers and high handicappers looking to improve their games.

Related Article  One Length Irons Reviews (Do They Make a Single Difference?)

Where Are Pinhawk Golf Clubs Made?

Pinhawk’s headquarters are in Girard, Pennsylvania, but the company makes no reference to the origin of their clubs in their official marketing. It’s difficult to deduce where their clubs are made because they retail through distributors and don’t disclose the country of origin of their irons.

However, given the price point of Pinhawk’s golf clubs, it’s fair to assume that many of the component parts of the clubs are imported to the US from cheaper labor markets in Asia.

This is certainly not a bad thing, and it’s extremely common practice throughout the golf industry, with many of the biggest brands in golf selling clubs that have been manufactured in Asia.

Something that many golf club retailers announce is that their clubs are ‘assembled’ in the US. This typically means that the finishing touches are added to the clubs in America before they’re distributed to various retailers.

While this might be the case with Pinhawk, it’s difficult to say as they don’t disclose this information. However, given the excellent reviews and the attractive price point of Pinhawk’s golf clubs, you don’t need to worry too much about their exact place of origin.

Pinhawk golf clubs are USGA and R&A legal. They are built to USGA standards and are currently listed on the USGA Informational Club Database. It’s always a good idea to check that your clubs are USGA legal before playing them in competitions.

You could face disqualification if you play clubs that are illegal.

Single-length irons are played on the PGA Tour, notably by Bryson DeChambeau, so you don’t need to worry about their legality.

You will find that non-confirming and illegal golf clubs are those that come with extravagant promises, be it a laser putter or a no-swing golf club, for instance!

These clubs can be viewed as gimmicks and would give you an unfair advantage if you use them over your competition.

So, you can purchase Pinhawk golf clubs safe in the knowledge that they’ve been built to exact USGA standards and can be used recreationally and in club competitions.

There has been a lot of focus on the use of single-length golf clubs in recent years, but it’s certainly not a new thing. Golfers have used single-length clubs for decades, with Tommy Armour being one of the first brands to manufacture them for recreational use.

The Pinhawk single length irons are a recent addition to the single-length game improvement market, making them an excellent option for recreational golfers who are looking for clubs that will improve ball striking and consistency on the golf course.

So, if you’re keen to invest in some single-length irons or hybrids, Pinhawk is a brand that is well worth considering.