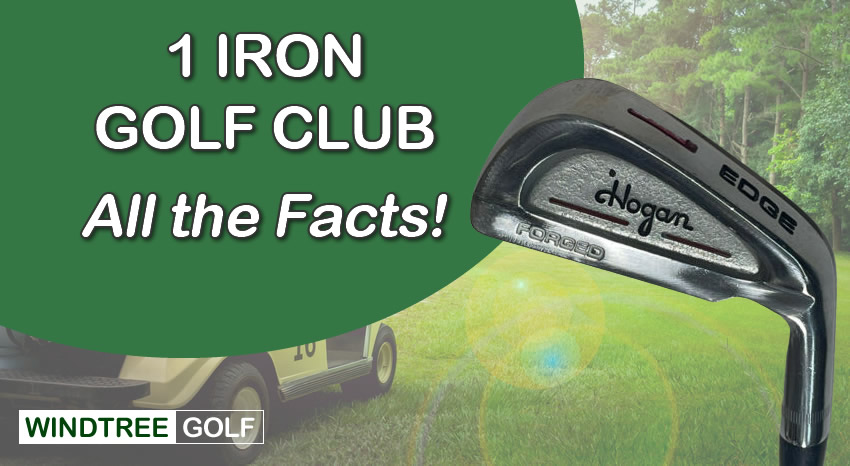 21st-century golfers would be forgiven for not realizing that 1 irons even exist! After all, they haven’t been popular since the likes of Jack Nicklaus were dominating the sport, as golfing technology has advanced and fairway metals and hybrids have replaced long irons in many players’ bags.

But that being said, you can still carry a 1 iron in your golf bag if you wish. But is doing so a good idea? And is a 1 iron really as difficult to hit as you’ve heard?

To help you decide if you should carry a 1 iron in your golf bag, we introduce you to ten facts about this long iron that you may not have known!

There is an actual club called the 1 iron which is the longest and lowest lofted iron, typically with 14 or 16 degrees of loft. This makes it tough to hit for most golfers. Because golfers are only permitted to carry fourteen clubs in their bags at any time, most players don’t carry a 1 iron.

They opt instead for a driver, woods, hybrids, and irons beginning from 3 or 4. However, if you can hit a 1 iron well, it’s definitely worth adding to the bag.

Just like every other iron, a 1 iron is legal to carry in your bag. But that being said, it’s not overly common in the game today. Most golfers have ditched long irons (1-3) and have opted for woods and hybrids, which essentially perform the same role but are much easier to hit.

When you’re considering the legality of your golf equipment, you just need to remember that you’re only permitted to carry fourteen clubs out on the course at any time or risk disqualification.

So, when you’re preparing your bag for your next round, consider whether a 1 iron will add value to your game, as opposed to whether or not its legal.

And if you’ve recently picked up a 1 iron, we’d definitely recommend spending some time out on the range before you commit to using it on the course, as it’s difficult to get used to!

Golfers may also like:  4 Iron Distance: Hit it Better and Longer!

What is a 1 Iron Equivalent to?

Given its loft of between 14-16 degrees, a 1 iron is equivalent to a 3 or 4 wood in the golf bag. As such, if you typically carry either of these fairway woods, it’s probably not necessary to bag a 1 iron as well.

Due to its loft and the difficulty of executing the perfect shot with a 1 iron, most recreational golfers would struggle to hit it consistently off the deck, limiting it predominantly to use on the tee box.

Ultimately, you’re in total control over what you carry in your golf bag, so you can add a 1 iron if you please. We would just recommend switching out one of your fairway woods, as there’s no point in carrying clubs that are capable of similar shots.

It’s fair to say that the 1 iron has all but disappeared from the modern professional golf game, with very few (if any) current PGA pros bagging a 1 iron. However, the 1 iron used to be a popular feature in the bag of the biggest names in golf before technology advanced.

Jack Nicklaus is widely regarded as the master of the 1 iron, hitting many memorable shots with the club in high-pressure situations.

In the 1972 US Open at Pebble Beach, for instance, Nicklaus hit a 1-iron directly into the wind on the par 3 17th. He landed the ball within six feet after clipping the pin, which clinched his third US Open title.

Here is a video of The Golden Bear using a 1 iron:

Ben Hogan was another famous player who used a 1 iron. In this NY Times article printed back in 2013 it states that Hogan used a 17 degree loft for his 1 iron.

In more recent times, Jon Daly is known to have enjoyed using long irons, famously commissioning Wilson to build a 0 iron for his bag!

But in the present day, most pros opt for woods and hybrids instead of long irons.

Does Callaway Make a 1 Iron?

Yes, Callaway forges 1 irons as part of their offer to golfers at all levels of the game. One of their most popular 1 irons was the Steelhead x-14 driving iron, but they also make custom driving irons upon request.

That being said, you’re unlikely to find a 1 iron in a Callaway set as standard, whether you order from the company’s official website or from an affiliate retailer.

Typically, if you want to carry a 1 iron, you will have to request the club or look for a used option online.

As is the case with many golfers today, you might be better served opting for one of Callaway’s woods or hybrids, as they are more forgiving and much easier to hit.

Who Else Makes a 1 Iron? (and are they still for sale?)

With a little bit of research, you will find that many of the top brands in golf have made 1 irons over the years. The likes of Wilson, Titleist, TaylorMade, and Howson have all built 1 irons, many of which are widely available on the used market today.

Because 1 irons are so difficult to hit, looking on the likes of eBay or Craigslist for a used club foe sale in decent condition is a good idea.

You can then take it out on the range and get a feel for the club, without committing to an expensive purchase.

After all, you don’t want to spend hundreds of bucks on a brand-new 1 iron that you can’t even hit!

Can You Replace a 1 Iron with a Driver?

Technically, you can replace a 1 iron with a driver. Ultimately, it’s entirely up to you what you carry in your golf bag. However, as mentioned already, a 1 iron carries equivalent loft to a 3 or 4 wood, so it’s best to replace one of these clubs with your new 1 iron if you so desire.

The confusion often lies in the fact that 1 irons are commonly referred to as driving irons.

While this is true, it doesn’t necessarily carry the same distance as a driver, particularly as they’re so much more difficult to hit!

When you’re putting together your golf bag, you want to strike the perfect balance and carry clubs that ensure success from tee to green.

So, you will find that most players opt for fairway woods, hybrids, or long irons, and don’t carry duplicate clubs that are capable of similar distances.

Naturally, there are lots of factors that influence how far you can hit a 1 iron, but men can reasonably expect to hit it between 180 – 220 yards, providing they execute the shot perfectly. Women tend to hit the 1 iron slightly shorter, but could still hope for 160+ yards from a good shot.

As is the case when predicting the distances of all the clubs in your bag, you need to consider things like the weather, lie, and your swing.

But when you take your 1 iron out on the range for the first time, you can reasonably expect to hit it 180+ yards.

The main reason that a 1 iron is so hard to hit is because of its loft. At just 14 or 16 degrees, this makes it extremely difficult for recreational golfers to hit consistently good shots with the desired trajectory.

As golfing technology has advanced, fairway woods (or metals) and hybrids have replaced long irons in the bag, primarily because they offer higher loft and are much easier to hit consistently.

Unfortunately, you will very rarely see players on tour risk using a 1 iron, given the huge variety of alternative clubs that they have at their disposal that are much easier to hit.

Regardless of your handicap, golfers will almost always find a 3 wood easier to hit than a 1 iron. Of course, everyone is different, but the demise of the 1 iron in recent times is a direct result of the fact that the club manufacturers have made alternatives that are much easier to hit.

However, if you take a 1 iron out on the range at start hitting it like Jack Nicklaus, by all means stick it in the bag! We just recommend removing your 3 wood as there’s little point in carrying both simultaneously.

The bottom line is that there’s no right or wrong way to make up your golf bag. If you want to use a 1 iron or a 3 wood, it’s entirely up to you.

We’d just advise you to practice out on the range beforehand, so you can carry the club that is best suited to your game.

Although the 1 iron has largely disappeared from the game of golf, it’s still possible to pick one up if you really want to where there are still places where you can pick one for sale such as eBay and other ad sites.

But given the prevalence of fairway metals and hybrids that are typically much easier to hit, you might be better leaving the 1 iron in the locker and experimenting with it on the range from time to time.