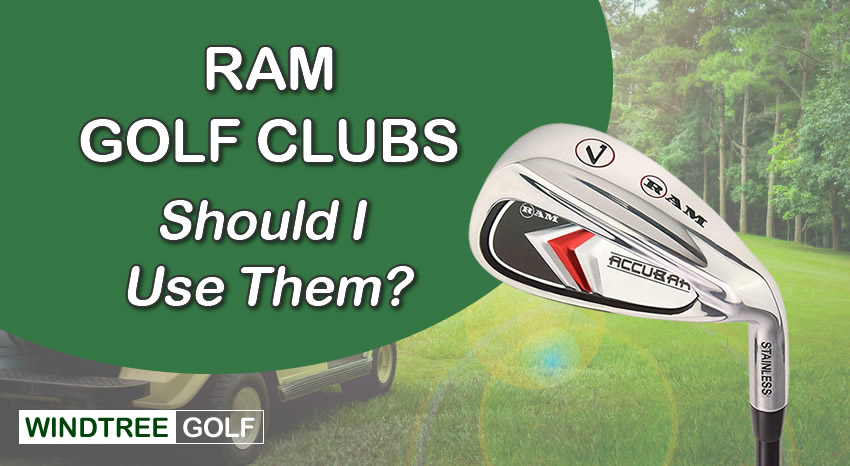 RAM is one of the oldest American golf brands in existence today, with its origins in Chicago following the end of the Second World War.

However, RAM has taken a nose-dive in popularity in recent years and is a long way from the brand that was endorsed by the likes of Tom Watson and Jack Nicklaus in its prime.

With this in mind, we take a look at RAM golf clubs in detail below and help you decide if they’re the ideal clubs to add to your golf bag.

RAM golf clubs are perfect for beginner golfers and high-handicappers. They’re extremely forgiving, well made, and available for a great price, ticking all of the boxes for those new to the game of golf.

To help you decide if these golf clubs are ideal for you, we explain everything we know about this brand below.

What Happened to Ram Golf?

Today, RAM golf has lost much of its independence as a golf brand and is actually a subsidiary of Tommy Armour Golf. In other words, RAM’s profile has changed significantly over the years, and it has fallen a long way since it stood proudly as one of the finest brands in the sport.

That being said, just because it’s no longer a stand-alone brand, it doesn’t mean that RAM is no longer in the business of producing excellent golf clubs.

You can still trust the guys at RAM to deliver clubs that are built to high specifications and are extremely forgiving, making them ideal for beginners.

Granted, you won’t see Tour pros using RAM clubs in the modern-day, but that isn’t something to worry about.

In fact, many budget manufacturers that produce game improvement clubs for beginners and high-handicappers (Wilson, Strata, etc.) aren’t prominent on the PGA Tour either.

The bottom line here is that while RAM might not enjoy the same level of popularity as the brand did in the past, their clubs are still a great option for those looking for high-spec golf clubs at a reasonable price. 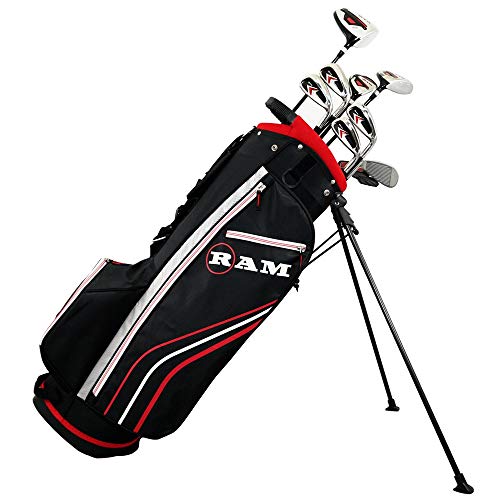 Touted as some of the best beginner clubs available, RAM Accubar clubs are excellent for people new to the game of golf. Retailing at around $350 for the entire set (including the bag), you won’t find a better value set of beginner golf clubs anywhere.

The graphite shaft on the driver and woods is flexible, and the club faces consist of a large sweet spot. Essentially, this makes it much easier for novices to hit the ball more consistently off the tee and makes the game of golf much more enjoyable!

The stainless steel Accubar irons are cavity-backed, which makes them much more forgiving than bladed irons. In other words, you don’t have to hit the sweet spot in the center of your irons every time you play a shot for your ball to fly straight.

The putter in the set is a mallet and is well-weighted, making it easy to align your shots and sink more putts. Overall, we’re extremely impressed with the build quality and price point of RAM’s Accubar golf clubs and think they’re an excellent choice for any novice or beginner golfers.

Are RAM Clubs Good for Beginners?

RAM golf clubs are perfect for beginners because they are well made and offer good value for money. When you’re just starting out in the game, it can be tempting to look at the clubs the pros are using and think that they will help you improve your game.

But in reality, tour-level golf clubs are extremely difficult for beginner golfers to hit, as they’re exceptionally high spec and designed for a totally different type of player. 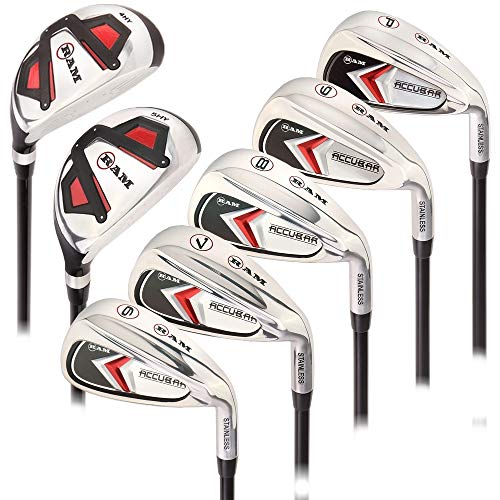 To get the most out of tour-level clubs, you need to be a confident and consistent ball striker, or you will end up duffing more shots than you make!

RAM clubs, on the other hand, fall firmly within the game improvement bracket of clubs. They’re designed with beginner golfers and high handicappers in mind, thanks to many of the features introduced above.

When you’re new to the game, getting a feel for the club and striking shots consistently is much more important than worrying about things like extra distance and spin control.

Therefore, RAM golf clubs are absolutely perfect for beginners and will help you improve your confidence and ball-striking ability on the course.

Golfers may also like:  Haywood Golf Reviews (Are These Clubs Any Good?) 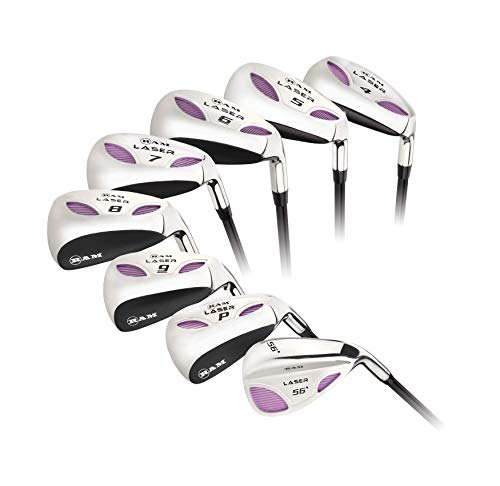 RAM created their laser hybrid irons because they wanted to produce the easiest clubs to hit in the game, and it’s fair to say they delivered. Everything about the hybrid irons is forgiving, and they enable recreational players to hit much more consistent golf shots.

The hybrids run from 4 through to SW, meaning you can revolutionize your short and long game by switching your current irons for a hybrid set. The reason that hybrids are so much easier to hit is that they’re much wider and thicker than standard irons.

This enables RAM and other manufacturers to place more weight in the base and lower the center of gravity. As a result, it’s much easier for novice and recreational players to get the ball in the air and move in the right direction.

While there are lots of hybrid iron sets out there, RAM’s laser hybrids are of great quality and are available for an excellent price.

If you’re struggling with your iron game and are looking for a tried-and-trusted solution, it’s definitely worthwhile trying out a set of hybrids to see if they improve your game.

RAM Golf Wedges – Are These Good for Me?

RAM’s Pro Spin wedges come as a set of three and, like other RAM clubs, are perfect for beginners and recreational players. The set comes with 52, 56, and 60-degree wedges, providing you with the ideal clubs when you’re in and around the green.

You can opt for a graphite or steel shaft, and when you consider the fact that they’re just $90 for three, it’s hard not to be impressed by their value!

While the club faces of the wedges might not provide as much spin control as other brands on the market, this isn’t overly important for beginners. After all, the goal is to get the ball within putting distance of the pin, not to make it spin back towards the hole!

As such, if you’re looking for a great set of wedges at a fraction of the price of some of the other brands in golf, we can’t recommend RAM’s Pro Spin wedges enough.

Who Made RAM Clubs in the Past?

RAM golf started in the immediate aftermath of the Second World War when it was launched as Sportsman’s Golf. Started by Al, Bob, Lyle, and Jim Hansberger in Chicago, the brothers converted their tool shop into a golf warehouse to produce equipment.

Golfers may also like:  PXG Golf Clubs: 7 Crucial Facts (Before you Buy!)

In the early days, their focus was on manufacturing golf clubs for other brands, and one of their biggest clients was George MacGregor Golf. By 1947, the brothers had bought the company and incorporated it into their own, which opened them up to a much bigger market.

Still, it wasn’t until 1967 that they decided to rebrand themselves, which is when the company became known as RAM Golf. During the sixties, one of RAM’s most popular clubs was the Bristol 600 Wizard putter, which was known as one of the best in the business.

RAM golf clubs were so highly thought of that they were used by legends of the game Tom Watson and even Jack Nicklaus, who played RAM in the late sixties.

It’s fair to say, then, that RAM Golf has an exceptionally proud history, even if it has lost its way a little in the present day.

Today, RAM is a subsidiary of Tommy Armour and falls under the ownership of Dick’s Sporting Goods. With stores in almost every major US city, you should be able to see a set of RAM clubs on display at a store local to you.

In spite of enjoying huge success from the sixties to the eighties, things started to unravel for RAM in the nineties, when other prominent brands started investing heavily in marketing and were being endorsed by the biggest names in the sport.

The company actually split into two divisions during the 1990s, with RAM Tour Balls being sold to TaylorMade and the club manufacturing going the way of TA as mentioned. The Hansberger brothers retired in the nineties after RAM was acquired, but Gary (Al’s son) launched Vulcan Golf in Chicago to continue the family’s legacy.

So, while RAM is still around today, you can only purchase their clubs via third-party retailers, and they no longer maintain an independent presence as a stand-alone golf brand.

RAM Golf is a brand with a long and proud history of being trusted by some of the most successful players in history.

However, in the present day, RAM is very much a brand for beginner golfers and high-handicappers, owing to the fact that their clubs fall into the game improvement bracket.

Therefore, if you’re looking for a new set of golf clubs for a great price that will help you play more consistent shots, we couldn’t recommend RAM highly enough.