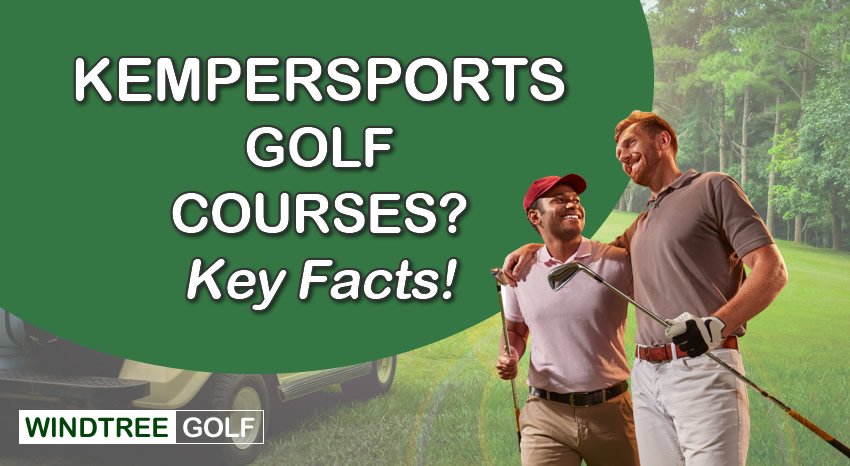 As one of the biggest golf course management companies in the industry, KemperSports is a firm that you may already know a little about.

With a considerable number of properties under their belt all over the United States, we take a look at KemperSports in more detail and explain what makes the company unique.

By the end of this piece, you will have all the information you need about KemperSports golf courses and will almost certainly add one of their properties to your must-play list.

KemperSports is a family-run business that manages more than 130 facilities throughout the United States. The Kemper portfolio includes renowned golf courses, destination resorts, and other sports and recreational facilities.

The group is essentially responsible for the management of golf courses and other hospitality venues throughout the country.

The concept started back in 1978 when Steven H. Lesnick and James S. Kemper purchased Kemper Lakes Golf Club in Illinois. From there, the company branched out and took various private golf clubs under their control.

KemperSports currently owns Bandon Dunes Golf Resort, which is regarded as the finest golf resort in the country as ranked by Golf Digest and GOLF Magazine. In other words, the properties under the management of KemperSports are elite and are among the finest golf courses in the world.

How Many Golf Courses Does Kemper Sports Own?

KemperSports currently owns more than 130 facilities throughout the United States, the majority of which are golf courses. Numerous KemperSports properties are nationally-ranked golf courses and tournament venues, with courses on the east and west coast, as well as those in central states.

Golfers may also like:  Types of Bunkers in Golf: Sand Traps Explained!

Many of KemperSports’ facilities come with specialty lodging and other health and fitness facilities such as swimming pools and tennis courts.

Some are also successful business and conference centers, and the scope of the facilities under their management varies from location to location.

Something that you can be sure about when you’re about to play a KemperSports managed golf course is that the quality and upkeep of the facility are likely to be of the very highest standard.

This is what Kemper is renowned for and is how they have built such a successful brand over the years.

So, whether you’re playing at Bear Creek in Arizona or the Riverside Golf Course in Janesville, Wisconsin, you can be certain that the KemperSports facility provides a true and distinctive test of golf.

What Notable Golf Courses Does Kemper Sports Own?

Of the 130 golf courses under KemperSports ownership, perhaps the jewel in their crown is Bandon Dunes Golf Resort in Oregon. Often regarded as the truest test in American golf, Bandon Dunes is one of only a handful of real links golf courses in the United States.

Harbor Shores, for instance, has played host to the Senior PGA Championship several times, with the 2022 and 2024 events already in the diary.

You will have heard of many of the golf courses owned by KemperSports that are situated all across the United States, and you can find a comprehensive list of their properties here.

So, no matter whether you live in the mid-west or the deep south, you will find a KemperSports property within driving distance of your home. Equally, if you’re heading on vacation in the near future, be sure to locate your nearest KemperSports facility and take the clubs with you.

How Many Employees Does Kemper Sports Have?

KemperSports employs more than 7,000 workers throughout the United States at more than 130 facilities. The roles within the company are broad and varied and include greenkeepers and golf professionals as well as hospitality staff, including chefs, waiters, and bartenders.

Golfers may also like:  What is a Municipal Golf Course? - Interesting Facts!

The company is based out of Northbrook, Illinois, but KemperSports employs people throughout the US.

The company generates around $1 billion every year and is one of the most successful leisure and entertainment companies in the entire country.

Due to the multitude of roles on offer within KemperSports, they’re a great employer in the areas of the country in which they operate.

Employees are happy with their experience of working for KemperSports (as introduced in one of the following sections), as it’s a company with a great reputation and various perks.

Suited to college students looking for part-time work or those who are interested in developing a career in the hospitality sector, KemperSports is a top American employer.

Steve Lesnik is the founder and chairman of KemperSports, having started the company in 1978. Starting with the ownership of one golf course in Illinois, Lesnik has been instrumental in driving the company to the pinnacle of the golf management industry in the United States.

Steve’s son, Josh, serves as the company’s president, a role that he started in 2007. He has been with the company for more than 25 years and Is responsible for overseeing the operations at properties throughout the United States.

Steve Skinner is the CEO of KemperSports, having joined the company in 1998. He has been the CEO since 2008, and he served as the vice president of the Michael Jordan Golf Company before moving to Kemper.

A lawyer by trade, Skinner is credited with much of the growth and success that the company has enjoyed in recent years.

The senior leadership team of KemperSports is based in Illinois, and it is very much a family-run business with strong American values.

Is Kemper Sports a Good Company to Work For?

KemperSports is a solid company to work for and is extremely popular with its employees. On Glassdoor, KemperSports has an overall rating of 4 out of 5, and 83% of employees would recommend working at the company to a friend. The same statistics tell us that the CEO has an approval rating of 99%.

Golfers may also like:  How Many Golf Courses in Myrtle Beach? - The Facts!

In 2012, KemperSports was named as the Club Management Company of the Year by BoardRoom Magazine, recognizing their success in the golf industry and the treatment of their employees.

Staff members have shared positive reviews of their employment with KemperSports, with many courses offering staff perks, including free golf memberships and discounts on the services that the facility provides to its members and the general public.

Overall, if you’re looking to work for a trusted and American company with a stellar reputation in the hospitality and leisure industry, then KemperSports is a company that you should certainly consider.

Just as he owns KemperSports, Steve Lesnik is the founder and chairman of its affiliate company, KemperLesnik. Credited as one of Chicago’s 101 Best and Brightest Companies to Work for, KemperLesnik is a marketing and PR agency in the windy city.

Josh Lesnik is heavily involved in the management of KemperLesnik, as well as Tom Valdiserri and Amy Littleton, who serve as executive vice presidents.

The forward-thinking marketing and PR agency is dedicated to giving back to the community, and KemperLesnik launched their Passion Project to support a range of non-profit organizations in Chicago.

The project sees a selected non-profit receive a full suite of agency services, which helps to propel them into the spotlight and achieve their potential.

KemperSports is one of the biggest and most successful golf course management firms in the United States, employing more than 7,000 workers at 130 facilities across the country.

Known for their attention to detail and extremely high standards, KemperSports golf courses are among the very best you can play in the US.

So, whether you’re playing a Kemper course near home or experimenting when you’re on vacation, you can be sure that you will be receiving a true test of golf and great service to match.