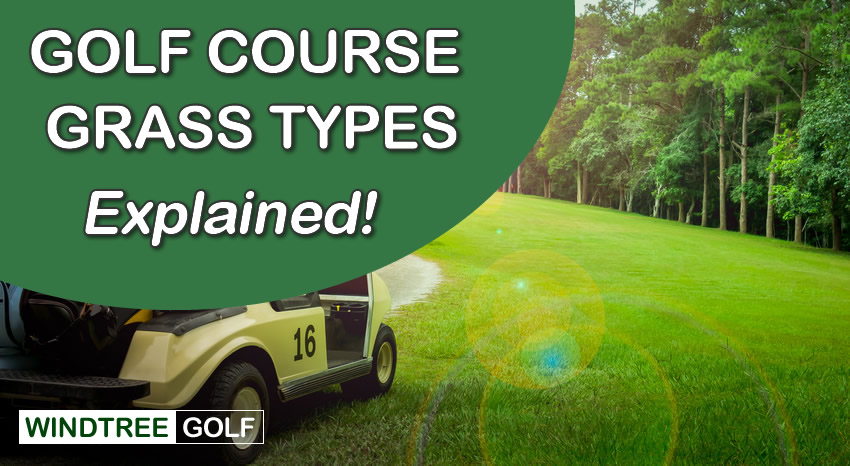 A considerable amount of effort goes into planning the perfect golf course. One of the most significant considerations of all course designers is which variety of grass should be used in each area of the course.

As this article introduces, there are several types of golf course grass used in the US, and one of the primary influences is the climate that the course experiences for the majority of the year.

This is because some grasses thrive in warm climates, while others work better in cooler temperatures.

Below, we introduce the most popular types of grass commonly used on golf courses in the US before answering some FAQs about golf course grass management. First, however, let’s begin by identifying what the best grass for a golf course is.

What is the Best Grass for a Golf Course?

The best type of grass to use on a golf course is a variety that is tough and fast repairing.

However, it also needs to be capable of withstanding lots of traffic, given the number of players that walk the fairways, greens rough, and tee boxes each day, and the maintenance crews and vehicles used to sustain the course.

Depending on where in the country the golf course is, turf-grasses such as Bermuda, Bentgrass, Zoysia, Kentucky Bluegrass, or Perennial Rye might be used.

Used at the pristine Augusta National, Bermudagrass is often regarded as one of the best grasses to use on a golf course, but the climate of a course will impact the type of grass that is planted, so it isn’t easy to definitively mark one variety of grass as the best.

Most Popular Types of Grass Commonly Used on Golf Courses

Below we introduce you to five of the most commonly used types of grass on golf courses around the world and explain their benefits and what conditions they’re best suited to.

As you might expect from its tropical-sounding name, Bermudagrass is commonly found on courses that boast a warm climate year-round.

In the US, courses in Florida and Georgia utilize Bermudagrass, as it is heat and drought resistant and is receptive to being mowed low, which is ideal for cultivating smooth putting surfaces.

You’re unlikely to find Bermudagrass in colder climates, as it dies if temperatures drop consistently below 30 degrees Fahrenheit.

So, if you’re one of the lucky ones who gets to play golf with the sun beating down on your neck all year round, you’re likely to be playing on Bermudagrass.

While Bermudagrass is unable to survive in colder temperatures, Bentgrass is much more resilient and can withstand colder regions, making it more widely used by golf courses that experience yearly changes in their climate.

Bentgrass also grows short and can be mowed low, which doesn’t harm the quality of the grass.

Because Bentgrass is capable of growing thick, it is commonly used on fairways as well as greens, thanks to its ability to withstand heavy traffic.

In addition, you will find that Bentgrass is used on golf courses in different parts of the world, as it doesn’t require a great deal of water to grow.

Of course, it’s perfectly suited for Northern climates where the weather is cooler, but it also thrives on courses in the Northeast as well as the Pacific Midwest.

Zoysia is a grass variety that is native to the Asian continent, but it has been cultivated in the US for more than a century.

Much like Bermuda, Zoysia is best suited to warmer climates where water is sparse. Favored for its drought-tolerant properties, it saves golf courses in water-scarce regions lots of money on irrigation.

It is another thick growing grass that is durable, meaning it won’t damage easily after experiencing high volumes of foot traffic.

While you’re unlikely to see Zoysia grass on the greens, it’s an ideal variety for both tee boxes and fairways at warm weather, municipal golf courses.

You will typically find Kentucky Bluegrass just off the fairways on lots of courses around the country, regardless of the climate.

Kentucky Bluegrass is appreciated for its hardy properties and ability to thrive in most environments, as well as its tendency to do well when it’s left to grow longer.

Although not commonly found on fairways of newer courses, you might still find Kentucky Bluegrass on fairways on courses more than twenty-five years old.

It was originally favored predominantly for its ability to withstand heavy traffic.

Newer courses tend to opt for creeping Bentgrass on the fairways as it is more tolerant to low cuttings, making the fairways better for golf.

It would be fair to say that Perennial Ryegrass is one of the longstanding favorites of golf course designers, and it is most commonly used on courses found in any cool-summer region.

In northern areas, it’s not uncommon to find perennial ryegrass used on all areas of the golf course, including fairways, tees, roughs, and even greens.

Ryegrass has a fine texture and clumps together, with its upright growing position creating less fiction on the putting surfaces where it is used.

It can also be mowed in such a way to cultivate aesthetically pleasing designs on the turf (such as striping), and it tends to carry a smooth texture with a deep green color wherever it is planted.

Why Do They Put Sand on Golf Courses?

Adding sand to golf course grass is a process known as ‘topdressing’ and is vital to the healthy growth of the grass across the course.

Sand topdressing has been performed on courses since the beginning of the game and is done to tee boxes, fairways, and greens to improve the health of the turf.

Adding sand results in improved smoothness, thatch dilution, improved turf recovery, increased firmness, and improved rootzone, each of which is vital to the maintenance of the golf course.

Related Article  Abandoned Golf Courses for Sale (How Much?)

Although topdressing the course is disruptive and often frustrating to members, the long-term benefits significantly outweigh the short-term frustrations.

What Grass Makes the Fastest Greens?

The two most common grass varieties used on greens are Bermuda and Bentgrass.

As we’ve already introduced, Bermuda loves the heat, while Bentgrass does better in cooler climates.

You will find electric putting surfaces where Bentgrass and Bermuda are used, but as research from Purdue University reminds us, putting green speed is all in grass management instead of simply the variety of grass used.

A poorly maintained and cut Bermuda green, for instance, will run a lot more slowly than a perfectly manicured Bentgrass green, and vice versa.

What is the Difference Between Bentgrass and Bermuda Grass?

The fundamental difference between Bentgrass and Bermudagrass is the climates in which they grow and thrive.

While Bentgrass is typically used in Northern states where the temperatures are cooler, Bermuda is popular in southern states that receive year-round sunshine.

While there are certainly some exceptions to this rule (Augusta National’s greens have been Bentgrass since 1981, for instance), it’s a good general rule of thumb to work with.

How Often do Golf Courses Water their Grass?

This is a difficult question to give a succinct answer to, as it largely depends on where a golf course is located!

Courses that experience high volumes of rainfall can rely mainly on nature to water the grass for them, whereas those in warmer, drier climes must be watered regularly.

One thing that is often overlooked is that overwatering is often just as harmful as underwatering.

Water conducts heat, so flooding a fairway or putting the surface with water will cause it to cook, ultimately damaging the grass on the surface.

Depending on the climate, golf course maintenance staff implement a water management system all year round to ensure their grass receives the ideal amount of water to thrive.

The type of grass used at a particular golf course largely depends on its location.

The five varieties that have been introduced in this article are commonly used on golf courses throughout the US and even further afield and are likely to feature on many of the courses that you enjoy playing.

Bentgrass and Bermudagrass tend to take the limelight, particularly where putting surfaces are discussed, and for good reason.

Both varieties are traffic resistant, fast repairing, and can be cut low, making them perfect options to be used on golf courses throughout the US.