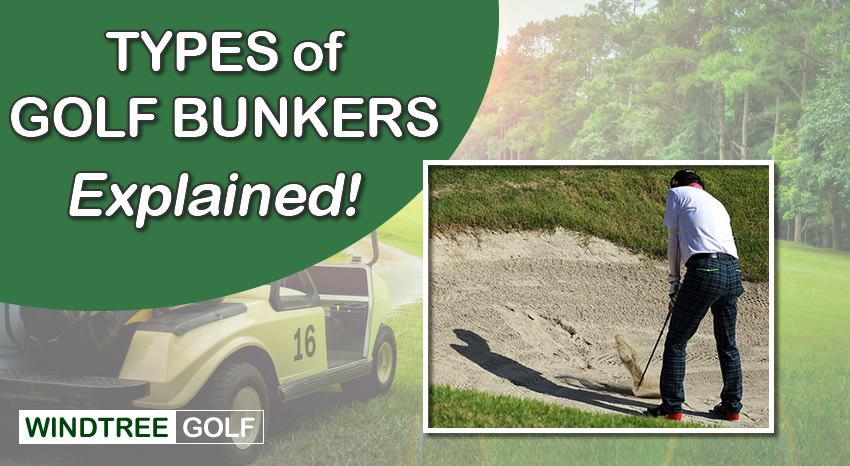 Sand bunkers are a vital part of the design of any golf course. They tend to be shaped and styled in various ways and are included to test the accuracy and strategy of players all over the course.

While bunkers come in all shapes and sizes, there is just one type of bunker according to the rules of golf: a sand bunker.

As we explore in this article, sand bunkers on different courses have received different names and are described in various ways, but they’re all considered the same type of hazard.

Let’s begin by looking at the sand bunker in more detail, and understand the distinction between a sand bunker and a waste area that may or may not contain sand.

What Types of Bunkers are there in Golf?

From a traditional perspective, there is only one type of bunker in golf: the sand bunker. If your ball finds its way into a sand bunker, you cannot ground your club before making contact with the downswing of your attempted shot.

If you ground your club in a sand bunker, you face a two-shot penalty for testing the surface.

Since 2019, rule changes have allowed golfers to remove loose impediments in a sand bunker, which was previously prohibited.

Given the huge variety in design, layout, depth, and size of bunkers worldwide, they’re often given creative nicknames that make them seem even more ominous as players approach them (we explore some of the most famous in this article).

But ultimately, they’re all just sand bunkers at the end of the day.

There is another area on the course; however, that may contain sand, and these are known as waste areas or bunkers.

These sandy patches are not treated as hazards and are considered general areas of the course, which means players are able to ground their club and perform practice shots.

It’s incumbent for players to enquire about the difference between bunkers and waste areas before commencing their round, particularly when playing in a tournament.

Where Did Golf Bunkers Come from?

The earliest golf courses were established on links land where sand blew across the course from the natural beaches that hugged the coast.

Scottish Golf History describes the earliest sand bunkers as ‘incontestably Scottish,’ and suggests that the use of sand as a hazard on the golf course may have been inspired by quarry pits that proliferated on many of the links in areas like Aberdeen, Bruntsfield, and Gullane.

From an etymological perspective, the word ‘bunker’ first appeared in relation to the sport in the 1812 Royal & Ancient rules of golf.

It is thought to come from the Scots word ‘banker,’ which was a form of seat or bench.

Considering the first golf courses originated in coastal Scotland, it’s a safe bet to assume that sand bunkers first appeared on those links courses, and their spread to courses around the world is yet another aspect of the game that is attributable to the Scots.

What is the Difference Between a Sand Trap and a Bunker?

The term ‘sand trap’ is amongst the most ‘disputed terms in golf,’ according to Golf Digest. But is there a difference between a sand trap and a bunker? Well, in common parlance, players often refer to sand traps and bunkers as if they’re the same thing, and there’s nothing really wrong with that.

But if you look to the official rules of golf, there’s not a single mention of the term ‘sand trap’ while a ‘sand bunker’ is, of course, introduced.

This suggests that the official term for the hazard is a sand bunker, but you may commonly hear players refer to them as traps while they’re out on the course with their buddies.

Another thing that’s important to reiterate here is the difference between a waste bunker and a sand bunker.

According to the R&A, a sand bunker is “a specially prepared area of sand” that acts as a course hazard, while a waste bunker is just a “general area” that has no special rules assigned to it.

In some instances, people get confused between waste and sand bunkers, which may be where the term ‘sand trap’ became widely used.

What are Deep Bunkers Called?

You might hear a particularly deep bunker called a pot or pothole bunker on occasion, owing to its size and depth. They tend to exist on links golf courses and originated on Scottish coastal golf courses.

But aside from this term for one specific bunker design, how are the deepest bunkers in the world of golf referred to?

Well, some sand bunkers are so notorious that they’ve been given their own nicknames!

The ‘Himalayan’ at Royal St. George’s, the ‘Basement’ at Chambers Bay, the ‘Principal’s Nose’ at St. Andrews, and the ‘Coffin’ at Royal Troon are just a few examples of some of the names of the deepest and most challenging bunkers in the world of golf.

What is the Biggest Bunker in Golf?

According to the Guinness World Records, the biggest bunker in the world of golf is Hell’s Half Acre on the seventh hole of the Pine Valley Course in Clementon, New Jersey. The hazard starts some 280 yards from the tee and extends 150 yards to the next section of the fairway.

The deepest bunker in Championship Golf can be found (and is best avoided!) at the British Open Course of Royal St. George’s in England. Dominating the right of the fourth fairway, it sits at a distance of 230 yards from the tee.

It stands at an incredible 40 feet deep and 25 feet wide, and it has wrecked many a scorecard over the years.

When it comes to the sheer volume of bunkers, no course can rival Whistling Straits in Wisconsin. The course is home to a spine-tingling 967 sand traps of varying sizes, lengths, and depths.

The eighteenth hole alone has 96 sand traps (some of which are sand bunkers, others are waste bunkers).

Few will forget Dustin Johnson’s two-stroke penalty at the eighteenth when he grounded his club back in 2010 at the USPGA, and missed out on a play-off with Bubba Watson and Martin Kaymer.

What Happens if a Bunker is Full of Water?

Unfortunately for those of you who find your way into a bunker full of temporary water, you either have to play it as it lies or opt for free relief within the same bunker (at the nearest point of complete relief within one club length, according to Rule 16.1c).

Perhaps the only thing more disconcerting than watching your ball rifling towards a bunker on the horizon is noticing that the recent downpour has caused it to be full of water, and all you can see is a gargantuan splash as your ball lands.

Your other option is less than ideal, but it will save you from getting wet.

For one penalty stroke, you can drop the ball outside the bunker by going back on your line as far as you like.

You just need to make sure that you keep the point where your ball lies in temporary water between you and the hole.

This might seem a little unfair, but bunkers are referred to as hazards for a reason, and they become even more dangerous when the weather turns against you!

What is a Principal’s Nose Bunker?

The original ‘Principal’s Nose’ bunker is at the Old Course at St. Andrews, the home of golf. The name comes from the fact that two bunkers sit side by side with a bump in between, which is said to make them look like nostrils.

The idea for the Principal’s Nose was taken to the US by course architect C.B Macdonald, who designed a similar set of bunkers on the eleventh hole at the National Golf Links of America.

From there, they spread and commonly appear at many courses throughout the US and in different parts of the world.

You will most commonly find a Principal’s Nose bunker positioned around halfway between the tee-ball landing area and the green.

They immediately necessitate strategic thinking and present an intriguing dilemma to players: should you play it safe, aim wide, or risk going over?

Like all golf course bunkers, the Principal’s Nose gets players thinking of the best ways to avoid the hazard and punishes wayward shots.

Although sand bunkers come in various shapes, sizes, and designs, they are all treated the same as far as the rules of golf are concerned.

Sand bunkers have been a testing hazard on golf courses since the game emerged on links courses in coastal Scotland, and are a signature of courses all over the world today.

Ultimately, you should do everything you can to avoid sand bunkers, as they tend to be unforgiving and will do everything in their power to ruin your scorecard!