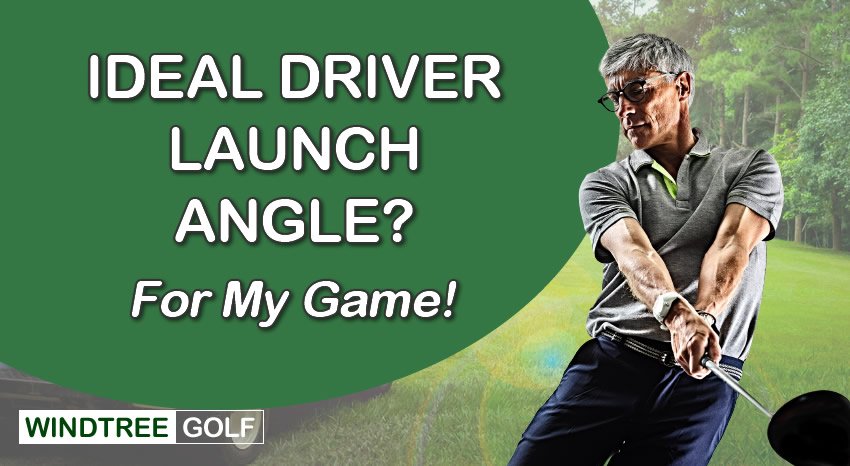 As a golfer, you will almost certainly have heard the term launch angle. It’s a term used alongside the likes of clubhead speed and angle of attack, and it’s crucial to understand what it is and why it’s important.

In this article, we explain everything you need to know about the ideal driver launch angle in golf and provide you with some top tips on how to master it with the help of a professional golf coach.

But first, what exactly is meant by driver launch angle in golf? Let’s find out.

What is Meant by Driver Launch Angle?

The driver launch angle refers to the angle of the ball flight after impact, directly in relation to the ground. The easiest way to think of it is as the delivered loft of the golf ball, and it’s an important metric when you’re analyzing your ball striking.

Professional golfers seek to master the launch angle of their drives, as it helps them increase their distance off the tee and is the reason why so many players can comfortably hit the ball more than 300 yards on Tour.

In practice, every golfer has a different launch angle, as it is primarily influenced by other factors, including your setup and the speed of your swing. So, what’s ideal for one player won’t be for another, which is why you need to work on your launch angle alongside other aspects of your game.

So, read on to learn everything you need to know to improve your driver launch angle, which will help you hit better drives off the tee more consistently.

What is the Average Launch Angle for a Driver?

The launch angle of your driver is not the same as the loft of your club, but the two are linked. For instance, if you have a driver with a lower loft – say around 9.5 degrees – it’s likely that your launch angle will be lower. The converse is also true.

While all golfers are different, you need to work hard to keep your launch angle within the 13-15 degrees range, as anything outside of this means you’re likely to compromise distance.

Golfers may also like:  Golf Driver Grip Position! (Where Should My Hands Be?)

The launch angle of your driver will also influence the trajectory of your tee shots, which is another important factor in the quality of your ball striking. Players with a higher launch angle will have a higher trajectory, and the opposite is true. But what is the optimum launch angle for distance?

What is the Optimum Launch Angle for Distance?

Technically, players with a lower launch angle are likely to hit the ball further, with anything between 11-12 degrees likely to produce a long drive. This is lower than the average launch angle for recreational players and is more like the launch angle that Tour plays aspire to.

But as we explain in the table in the following section, there are various other aspects of your swing that you need to think about in order to achieve longer distances from the tee. The likes of swing speed, spin, and angle of descent all need to be considered, and it’s not enough to look at the launch angle alone.

As you will be aware, the golf swing is a fluid motion, and there are so many factors that can influence the way that you strike the ball, so it’s not always helpful to look at statistics in isolation when you’re hoping to improve your ball striking.

With that in mind, let’s take a closer look at how you can calculate the ideal launch angle for your game based on some of the other important metrics that influence your ball striking capabilities.

The table below will help you calculate what your optimal driver launch angle should be:

As you can see from the above table, there are lots of factors to think about when executing the ideal drive. Given that most recreational players have standard swing speeds between 84-96 mph, it’s reasonable to have a launch angle of 13-16 degrees.

If your clubhead speed is faster than average, you can aspire for a lower launch angle, which will help you hit the ball further. You can use a Trackman to access this key information about your swing, or you can schedule a lesson with a teaching professional who will run through these key metrics with you.

But as we’ve already stressed, it’s important to look at more than just your launch angle when you’re seeking to improve your ball striking. All of the components of your swing need to be in sync if you’re to achieve your improvements, as evidenced by the above table.

Golfers may also like:  Easiest Driver to Hit in 2023? (Forgiving Winners!)

Why is Launch Angle so Important for a Driver?

Launch angle is so important for a driver as it indicates the likely trajectory of your shots off the tee. The angle at which you launch your drives will also directly impact how far you’re able to hit the ball off the tee, which affects all aspects of your game and scoring.

Given the prevalence of tools like the Trackman, it has become much easier for players at all levels of the game to track the launch angles of their drives, thus improving the various aspects that feed into their long game.

If you ignore the launch angle of your driver, it will be difficult to correct the various components of your swing. This is a mistake that a lot of recreational players make, as too many people fixate on their swing speed as opposed to the other metrics that are so important.

So, if you’re looking to improve the way that you hit the ball off the tee, you can’t afford to ignore your driver launch angle. But equally, you need to be aware of the other factors that contribute to your ball striking, as we’ve already highlighted.

How Do I Improve My Driver’s Launch Angle?

In order to improve your driver’s launch angle, you need to adjust your stance. Any professional golf coach will tell you to play your drives off the inside of your left heel, which is solid advice when you’re just getting started in the game.

But to improve your driver’s launch angle, making a subtle adjustment to your stance can make a big difference, and you can try shifting back in your stance ever so slightly at the moment of address.

Of course, enhancing your swing speed and ensuring that you hit fully through the ball on the downswing can also make a big difference to your driver’s launch angle, so it’s important that you work on all aspects of the puzzle simultaneously.

If you’re concerned about your driver’s launch angle and want to see some improvements in the way that you strike the golf ball, it’s a good idea to schedule a lesson with a teaching pro and use the trackman data that you’re presented with to your advantage.

Why is My Driver Launch Angle Too High?

If your driver launch angle is too high, it means that you’re getting too much height on the ball and are sacrificing distance. This can happen for several reasons, but one of the easiest ways to correct it is to adjust your stance.

Golfers may also like:  Standard Golf Driver Length: (What Should it Be?)

You can move the ball back in your stance, which changes the angle of attack of your drives, meaning you’re not hitting up on the ball as much as you ordinarily would be. This, in turn, enables you to lower the launch angle and hopefully get more distance on your drives.

We should also note that having a high launch angle isn’t necessarily a bad thing. If you’re able to get the ball down there 200+ yards, and it’s down the middle, you don’t need to make any adjustments!

Why Is My Driver Launch Angle Too Low?

Having a low driver launch angle creates the opposite problems to those addressed above. If your launch angle is too low, it can result in relatively flat drives that don’t have great shape. When the ground is soft, it can be difficult to get the required distance on your tee shots as a result.

We recommend correcting your stance by shifting forward, which helps to ensure that you hit up on the ball on your downswing. What’s more, adjusting the loft of your driver to have more loft can positively impact your launch angle.

As mentioned above, it can be daunting to try and adjust the launch angle of your driver, so it makes sense to schedule a lesson with a golf coach to help you.

This way, you can address the various components of your golf swing, which will include launch angle, club head speed, and other essential metrics that will influence the way that you strike the ball off the tee.

The bottom line is that the launch angle of your driver is extremely important, and it will affect your ability to hit the ball long and true off the tee. But that being said, it’s not the only statistic that you need to think about when addressing your long game.

Thanks to the data that you can access from a Trackman and other golf launch monitors, it makes sense to look at all of the components of your golf swing when you’re seeking to make improvements.

This is best done under the supervision of a golf coach, so if you’re hoping to improve your launch angle, we recommend booking a lesson with a golf pro in your local area to get started.