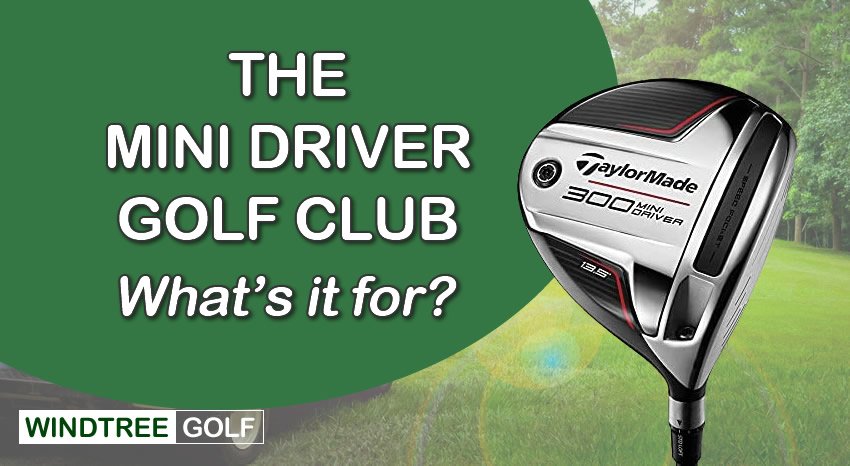 As you’re probably aware, there are many different clubs you can add to your golf bag. And one club that has attracted a lot of attention recently is a mini driver, given its use on the PGA Tour by some of the biggest names in the sport.

But what exactly is a mini driver? What’s it used for? And is it worth adding one to your bag?

Below, we explore everything you need to know about golf mini drivers and help you decide whether this slightly unusual club is worth adding to your bag this season.

What is a Mini Driver Golf Club?

Mini drivers are classed as clubs between a conventional driver and three wood. They’re called mini drivers because they come with a smaller head and shorter shaft than standard drivers, which theoretically offers players more control over shots.

Although it’s perhaps the most enjoyable club in the bag to hit, the driver can also be the most challenging for some people. This is because it has the lowest loft, and it requires a specific technique to get the ball up and away.

Given that a mini driver is by definition smaller than a standard driver, it can help some people with how well they control their shots. We look at some of the things you need to know about mini golf drivers in the following sections.

What is the Purpose of a Mini Driver?

The purpose of a mini driver is to make things easier for recreational players off the tee. They are designed to be hit from the tee instead of the grass, but some players are skilled enough to hit them from the fairway or even the short rough.

Another benefit is that they come with all the modern technology you would expect from any other driver, but they’re just slightly easier to hit accurately. In other words, they’re an excellent option for any recreational player that is struggling to hit a driver or three wood off the tee consistently.

Golfers may also like:  Hammer X Driver Review (Is it Even Legal?)

One thing to note about a mini driver is that you might not be able to hit it as far as a conventional driver. However, by compromising on length, you will almost certainly benefit from improved accuracy off the tee, meaning you will often find yourself in the center of the fairway.

So, if you’ve been struggling with your long game for a while now, there’s no doubt that a mini driver could help you out.

Is a Mini Driver Essentially a Three Wood?

No, although it looks like a three wood, a mini driver isn’t the same club. As the name suggests, it is still technically a driver. It has just been manufactured to be shorter than a standard driver and is easier for beginner and recreational players to control.

At 11.5 degrees as standard, most mini drivers also have less loft than most three woods, another important distinction between the two.

Although some people find that mini drivers don’t go as far as standard drivers, most people can hit them further than a three wood.

If you decide to buy a mini driver, you shouldn’t plan on taking a three wood out of your bag. Instead, they should replace your standard driver.

So, please spend some time out on the range with a mini driver before deciding whether or not it will help you enhance your game.

Are Mini Golf Drivers Any Good?

Mini golf drivers are made to extremely high specifications, and they are just as good as standard drivers. Just because they’re smaller, it doesn’t mean that they’re of an inferior quality to the conventional drivers that dominate the game.

Specifically, mini drivers are often made from titanium with graphite or stainless steel shafts.

They are manufactured by some of the biggest companies in the sport – including TaylorMade, as we explain below – illustrating the standard you can expect from a mini driver.

The critical factor to remember is that a mini driver is not an essential club to carry in your bag. Instead, it’s only really going to help your game if you’re struggling to hit a standard driver and are looking for a viable alternative.

This is because you’re unlikely to be able to carry the ball the same distance when using a mini driver, so unless you aren’t having much success with a standard long stick, it’s best not to switch to a mini driver.

Golfers may also like:  Choking Down on Driver? (8 Critical Facts!)

What is the Point of the Taylor Made Mini Driver?

The compact 300 driver from TaylorMade is one of the most popular mini drivers. It is playable off the tee and the deck and provides extra distance and control compared to a standard three wood. 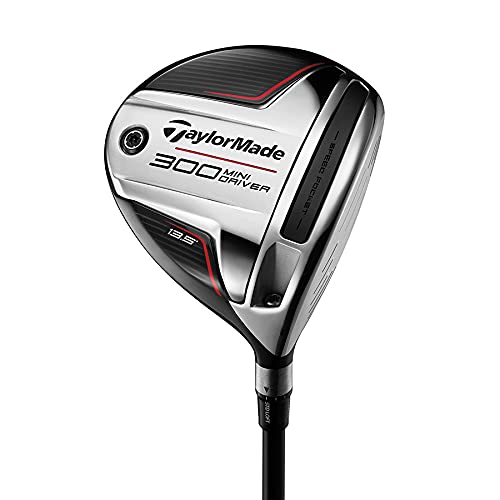 The driver’s head comes in at just 307cc, significantly smaller than the 450cc that many conventional drivers boast. The shaft is shorter, too, and is a similar length to most three woods.

One of the most impressive aspects of the TaylorMade 300 is that it features the company’s Twist Face technology, meaning you still benefit from TaylorMade’s latest innovations.

You can opt for a loft of 11.5 or 13.5 degrees, depending on what you’re looking for in a mini driver. Naturally, the lower lofted club will fly with a downward trajectory and go that little further than a 13.5.

Overall, if you’re looking for a mini driver, the TaylorMade 300 is one of the best. It looks great and will help you if you’re currently struggling to hit the ball consistently straight off the tee.

How Long is a Mini Driver?

A mini driver is 43.7 inches as standard, which is considerably shorter than the stock shafts of many of the industry’s most popular drivers. For instance, TaylorMade drivers come with a 45.75-inch shaft as standard, highlighting how much shorter a mini driver is.

Also, TaylorMade’s three woods are 42.7″, which shows that the mini driver is indeed between a driver and three wood as far as length is concerned.

This makes it a kind of in-between club and gives you an idea of what to expect in terms of ball flight and distance.

If you custom-fit your golf clubs, there’s no reason why you can’t increase or decrease the length of the shaft on your mini driver. This is true of all of the clubs that you carry in your bag and is a viable option for particularly tall or short people.

Who Uses a Mini Driver?

Many golfers at all levels of the game use mini drivers, particularly recreational players who are struggling to hit a standard driver consistently.

At the elite level of golf, the likes of Phil Mickelson and Dustin Johnson have played a mini driver in recent tournaments, highlighting the fact that they’re well suited to anyone who wants to try them out.

Golfers may also like:  Easiest Driver to Hit in 2023? (Forgiving Winners!)

As one of the biggest hitters on Tour, many people were surprised to see DJ rock up at the 2021 US Open with the TaylorMade300 mini driver. DJ finished T19 at Torrey Pines, so the inclusion of the mini driver didn’t land him another major victory as expected.

Phil Mickelson gave an interview about his use of the TaylorMade mini driver and described it as a two wood, at least as far as his distances.

Lefty carded four over to finish T62 at the same tournament, so the mini driver didn’t do him favors that year.

How Do You Hit a Mini Driver?

You hit a mini driver in the same way you hit a standard driver. You should play the ball of your inside heel and execute your swing as you ordinarily would. Just because the club is a different size to a standard driver, it doesn’t mean you need to approach your shots any differently.

One thing to remember is not to try and hit your mini driver too hard, which is something that some people fall into the trap of doing. After all, when you lose a little distance from the tee, it’s tempting to try and crank things up a notch to compensate for the lost yards.

But as you will be aware, trying to rip the skin off the golf ball when you’re standing on the tee will almost certainly lead to a shank or duff shot, so it’s certainly not advisable.

Just accept that you’re likely to lose some yards when you step up and hit a mini driver instead of trying too hard to match the distances of a conventional driver.

As DJ and Phil Mickelson illustrated at the recent US Open, the mini driver has made it to the game’s elite level. It offers something slightly different and falls between a driver and three wood.

While you certainly don’t need to buy a mini driver, it could be a good option if you’re struggling to hit the ball consistently off the tee.

So, instead of struggling with slices, shanks, hooks, and other mis-hits with your big stick, consider trying out a mini driver today, as it may help you improve your long game.