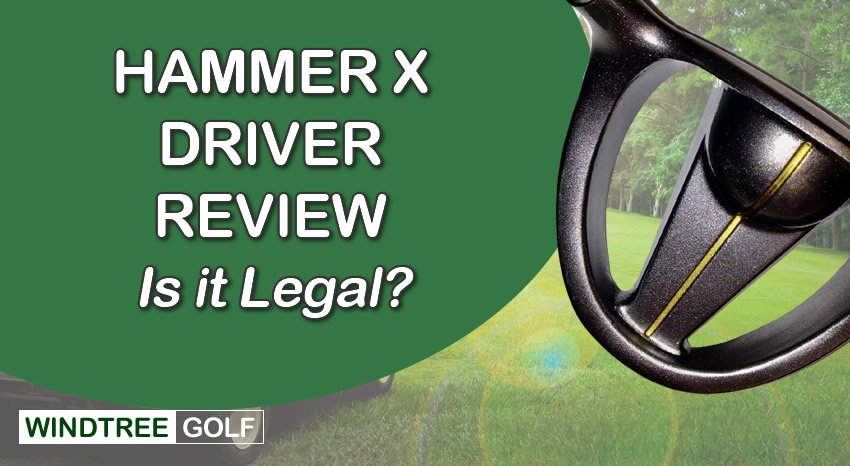 When you see a golf club advertised as ‘the world’s longest driver,’ it’s time to sit up and take notice. The Hammer X driver is legendary thanks to one of the most inspired infomercials ever to air on the Golf Channel.

But does the Hammer X really work? How much does it cost? And where can you pick up a new or used Hammer X to try this season?

Below, we explain everything you need to know about the Hammer X driver and explain why this non-conforming driver has proven to be so popular with golfers over the years.

But before we do it’s time to check out the original commercial (it’s hammer time!) – do you remember it?

What is the Hammer X Driver?

The Hammer X driver is a 0CC club with no crown. It is comprised of a power core that ensures the mass of the club is behind the sweet spot of the clubface. The manufacturer claims that this club will help you reduce your handicap by ten while adding fifty yards to your game. 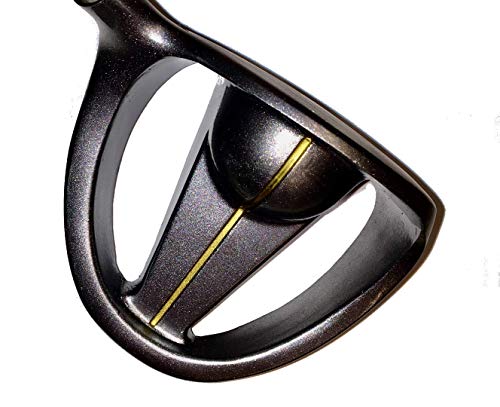 But as you’re probably aware, it’s not quite as simple as this to improve your game.

Theoretically, this makes ball striking almost effortless, and providing you get the mechanics of your swing right; you can fire the ball down the center of the fairway more often than not.

But does the Hammer X really work?

Is the Hammer X Driver Any Good?

It would be fair to describe the reviews of the Hammer X driver as mixed. Many players who have tried it claim that it doesn’t work as advertised, while others say that it has helped them improve their distance and accuracy off the tee.

The players that complain about the Hammer X essentially say that it’s a gimmick, and it doesn’t improve distance at all.

Given its unique design and composition, the club has been engineered for this precise purpose, meaning it’s disappointing if it doesn’t achieve what it claims to deliver as standard.

However, when it comes to product reviews, you need to remain as objective as possible. After all, every golfer is different, and what works well for one won’t necessarily be a success for another.

So, if you’re keen to try this club and believe that it will help you improve the distance and accuracy of your drives, there’s no harm in adding it to your golf bag or practicing with it out on the range.

How Much is the Hammer X Driver?

The Hammer X driver currently retails at $99, but you can buy a used one for considerably less on sites like eBay and Second Swing.

But if you’re buying a used Hammer X driver, make sure you read the description carefully and spend time looking through the pictures, as you can often get caught out with used clubs that are in particularly bad shape.

Given that this club is very much a gimmick and most players will only use it out on the range or during practice rounds, $99 is a reasonable price to pay to experience a little bit of fun with your buddies!

If you use it for a couple of months and don’t get any joy out of it, you can always list it on eBay or Facebook Marketplace and recoup some of the money you spent on it.

The Hammer X driver is not USGA conforming, meaning it is illegal in official club tournaments. It’s also not advisable to use this club when you’re playing a round of golf with other golfers, as they won’t be happy at the unfair advantage that you can gain from the club.

The reason that the Hammer X is not USGA conforming is the fact that it has a 0CC clubface. The vast majority of drivers on the market today operate within the legal 440-460CC bracket.

Golfers may also like:  The Best Golf Drivers for Beginners

When you take a look at the club, it is unconventional in every sense of the word. It looks and feels nothing like a driver, and you would be forgiven for thinking that you were playing some kind of hybrid off the tee.

So, if you decide to purchase this driver to see if you can hit it like Jack Hamm (more on this below), you can only use it out on the range or when you’re playing a casual round of golf with your buddies, and not in official tournaments.

Who Makes the Hammer X Driver?

The Hammer X driver is the result of Jack Hamm’s quest to produce the longest driver in the sport. As a long drive champion himself – Jack claims to have hit the ball 453 yards – there’s no doubt that his ambition to create a beastly driver was well-intentioned.

If you’ve ever watched the Golf Channel, you have almost certainly seen Jack’s infamous infomercial, in which he proclaims ‘Powwwww’ and ‘Whammmm’ as he smashes golf balls over mountains with the club.

It’s easily one of the most sensational golf adverts ever produced, and it has actually led to Jack selling huge numbers of this driver to customers throughout the United States.

To golf fans, Jack Hamm is a legendary figure who carries an air of mystique and intrigue with him everywhere he goes. It’s for this reason that the Hammer X driver has enjoyed such popularity, even if the reviews are mixed as to whether or not it actually works.

Looking for The Hammer X Driver for Sale? (Where to Buy!)

If you want to try Jack Hamm’s famous club, you can buy it from various online stores. The best place to look for the Hammer X is Amazon, where you can pick it up for $100. It ships to locations all throughout the US, subject to availability.

Alternatively, if you’re looking for a used one for sale, you can check out eBay, Craigslist, or Facebook Marketplace.

Golfers may also like:  Best Driver for Average Golfer? - The Final Verdict!

At the time of writing, there are several listings of the Hammer X on eBay for less than $60, which presents you with a good option if you’re keen to try the Hammer without paying the MSRP.

Another option is to try online sites like Second Swing Golf, although they don’t typically retail non-conforming clubs on their platform. Still, it’s worth looking in different places for the club, particularly if you can’t find a new or used club on the likes of Amazon or eBay.

What Other Clubs Do Hammer Make?

Jack Hamm is behind the production of several other non-conforming distance clubs that are available on his website. However, the Hammer X is the golf club that every golfer knows about, as a result of the aforementioned infomercial, which has become such a hit with golf fans.

The infomercial convinced so many different people to try it out to test Hamm’s claims that they could immediately add fifty yards to their game.

But as we all know, gimmicks don’t always work, and there’s a lot more to think about if you want to increase your distance off the tee.

That being said, if you’re looking for a club that can potentially increase your distance off the tee and want to put Hamm’s claims to the test, then see if you can pick yourself up the Hammer X this golf season.

Thanks to a legendary infomercial that truly captured the imagination of golf fans, the Hammer X is one of the most intriguing non-conforming drivers on the market.

In spite of mixed reviews, golfers from all over the United States are desperate to try Jack Hamm’s unique creation to see if it does, in fact, add 50 yards to your tee shots.

So, if you want to try a driver that is completely unique and unlike anything you have ever hit off the tee, the Hammer X is undoubtedly the club to try out on the range this season.