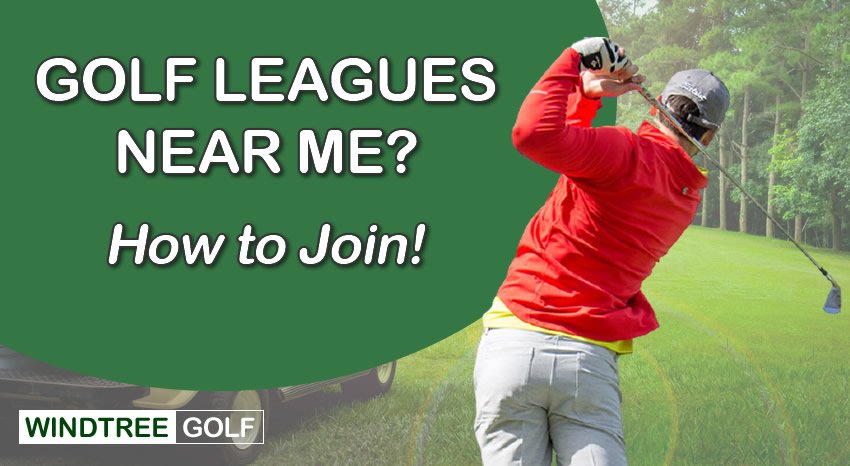 While many of us take to the golf course to get away from it all and enjoy the peace of a solo round, others prefer playing competitive matches every week.

For this reason, golf leagues are so popular right now, as people at all levels of the game can compete against other players in their area.

So, below, we explain how you can join a golf league, what you need to think about, and how to set a league up yourself potentially.

By the end of the article, you will have all the information you need to dive into competitive golf and join a league in your local area.

How Do I Find a Golf League to Join?

One of the best ways to find a golf league to join is to contact the local public and private courses in your area. Many of them have golf leagues you can join when you become a member, or they might even host leagues open to members of the public.

If you don’t want to contact golf clubs directly, you could look online on a platform like MeetUp.

While MeetUp golf leagues tend to be casual and better suited to people who want to enjoy the game’s social side, they’re usually very friendly and welcoming if you’re new in town and hoping to get to know some people.

Another good place to look is on social media. Many golf leagues have Facebook groups, so you can reach out to the group admins to find out how to join the league.

Some will have handicap requirements, while others will be open to golfers of all abilities.

You should also remember where the golf league takes place and the joining requirements for the course in question.

How Much Does a Golf League Cost?

Most golf leagues charge a small fee, usually no more than $5 per round, contributing to the league’s administration, prizes, and other costs associated with its running.

The most significant cost associated with joining a golf league is the green fees you will pay to the golf course.

Golfers may also like:  How Much Do Caddies Make at Golf Country Clubs? - Wow!

Whether this is a membership or a one-off fee, you will have to pay this to the pro in the clubhouse before you tee off.

If you’re hoping to save a little bit of money, opt for golf leagues that run during the week or late in the afternoon, as they will cost considerably less as far as green fees are concerned.

Although every golf league is organized differently, you will find that most are free to join.

You will need to cover the costs associated with your green fees and the tournaments you enter, but make sure you enquire about the necessary costs before committing to a golf league.

How Many People Do You Need for a Golf League?

At a minimum, you should probably invite at least three other golfers to join your league. Therefore, playing as a four-ball each week makes tracking your scores relatively straightforward and gives you even more reason to compete against your playing partners.

The beauty of golf leagues is that they can consist of as many or as few golfers as you like. Some golf leagues have less than ten members, while others have as many as 100.

If you’re putting together a big golf league, splitting players into divisions is best, as it makes things a lot easier to manage.

In addition to deciding how many people to include in your golf league, you will need to decide on its structure, how fixtures are allocated and how scores are kept.

After all, there are many ways to score a game of golf, be it stroke play, match play, or Stableford.

If you can’t find a golf league to join in your current area, there’s nothing stopping you from setting one up and inviting your friends to join.

We explain how to set up your golf league and manage its associated schedule below.

How Do You Set up a Golf League Schedule?

The easiest way to set up a golf league schedule is to use a spreadsheet with either Excel or Google Sheets. Depending on your league’s members, you can plan out all the fixtures from the same place and set up a WhatsApp or Facebook group to keep members in the loop.

This is the best way to set up a golf league schedule without spending much money.

Golfers may also like:  Golf Course Superintendent - A Good Job?

You might also want to launch a simple blog or website that you can use as a point of reference for your group.

You can also post updates directly to your members about the latest scores and positions.

If you don’t fancy developing a golf league schedule, you could use software like EZ Golf League to help you out. You can run your golf league on your smartphone for a monthly fee, automating the entire process.

The app lets you pay fees, input real-time scores, utilize a live leaderboard, and chat directly with other league members.

Using software to help you is a smart move, as the administration of a golf league can be time-consuming and lead to a whole host of arguments, particularly as your league gets bigger.

How Long Do Golf Leagues Last?

Golf leagues typically run throughout the golf season, starting in spring and ending in late fall. This is because the conditions are most favorable during these months, and you can play golf without worrying too much about the weather.

During the wet and cold winter months, it’s much more difficult to schedule regular golf matches, which results in a backlog of fixtures and may even cause the league to be canceled.

That said, some organizers and clubs run golf leagues through the winter; they usually have fewer fixtures.

When planning your golf league, you must think carefully about its duration. It’s best to consult with other players to understand what everyone thinks is a good idea.

After all, many golfers only play the sport in the summer, so you must host your league when everyone is available.

If your league is particularly popular, you could always run an out-of-season league or cup competition that keeps players active all year round.

While it might not be as well attended as the seasonal league, it’s a good way to keep things going during the off-season.

How Do You Win a Golf League?

While every golf league is different, you can win your league by finishing at the top of the pack. Of course, you will have to play consistently good golf, beating your competitors in your weekly match-ups.

Your handicap will play a big part in your golf league performance, so you need to consider it.

As mentioned, some golf leagues have different divisions for players between certain handicaps, be it 1-9, 10-19, and 20-28, for instance.

Golfers may also like:  PGA Tour vs European Tour in Golf (Which is Best?)

This gives you an excellent opportunity to compete against players of a similar standard and means you won’t be demoralized by coming up against a scratch golfer every week!

It’s also easier to manage a league that has been split up based on handicaps, regardless of how the fixtures are scored.

The bottom line is that to win a golf league; you need to play well every week and beat the person you line up against.

And as is the case with any sport, the person at the top of the pack will be declared the winner at the end of the season.

How Do Golf Leagues Score?

One of the most popular scoring systems in league golf is Stableford, where players are awarded points based on their performance throughout the round against their handicap.

In this format, your points will accumulate throughout the season, and the winner will be the person with the most points.

Alternatively, some golf leagues might focus on stroke play. In other words, the person with the lowest score after handicaps are considered will win.

Again, the league may tally your weekly scores, and at the end of the season, the person with the lowest score will be declared the winner.

Finally, another popular way of scoring golf leagues is match play. This is where you compete directly against players throughout your match. If you win the game, you will be awarded a certain number of points (perhaps 3), and you may even share the points if you tie.

As you can see, golf leagues are scored in many different ways, so you need to ask the right questions before settling on a league to join.

Joining or starting a golf league from scratch is an excellent way to enjoy the social side of the sport. Leagues offer friendly competition and ensure things remain interesting throughout your rounds.

After all, if you’re only playing casually with your friends, it’s easy to become complacent, and you don’t necessarily play your best golf.

So, we hope you’re now in a position to join or start a golf league in your local area and can enjoy the social side of the game that makes golf such a popular sport.