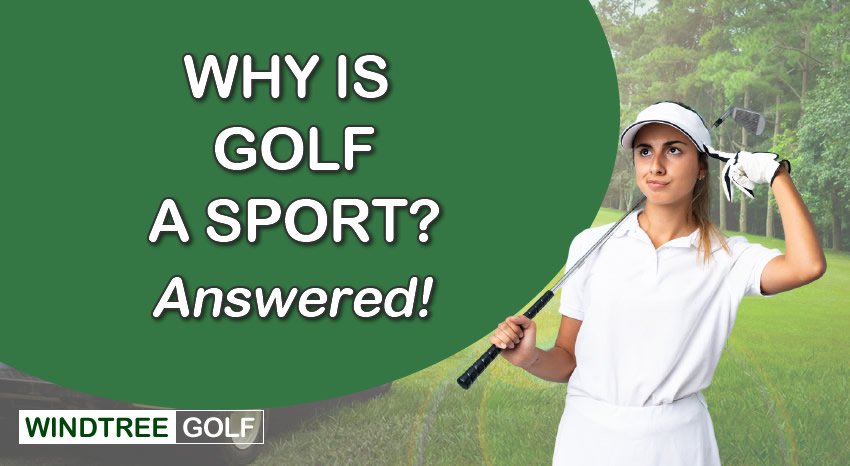 One of the most common questions asked about golf is whether or not it is considered a sport.

Whether on the internet, in the locker room, or at the clubhouse bar, this argument seems to come up time and time again. So, why is golf a sport if it’s just striking a ball and walking on a course?

Golf is a sport because it requires physical ability and skill. Golfers need coordination, stamina, balance, and power to hit the ball, as well as the ability to control their body and the golf club. Good golfers are athletes who have trained their bodies to perform at a high level.

Why is Golf a Sport?

Golf is a sport because it requires physical exertion, is competitive, and has rules and regulations. A sport is defined as any activity where the players follow a set of rules, compete against each other, and try to win. Golf meets all three of these criteria.

Golf is not a sedentary activity; it requires physical exertion. Walking 18 holes can be quite strenuous, and carrying or pulling a golf bag full of clubs can also be tiring. In addition, golfers must swing their arms and use their upper body strength to hit the ball, which requires some level of fitness.

Golf is also a competitive sport. Although it can be played for fun, many people take the game seriously and compete against others in order to win.

Golfers may also like:  What is a Hole Out in Golf? - Explained!

There are professional golfers who make a living by playing the game, and there are also amateur tournaments that anyone can enter. Golfers compete against each other by trying to get the lowest score possible.

What Defines a Sport?

A sport is defined as an activity where physical skill and endurance are tested through competition. The main aim of a sport is to physically challenge the participants in order to test their mettle.

There are endless types of sports, be it individual or team sports, but they all have one common goal – to be the best at what they do.

Sports don’t necessarily have to be physical. There are many mind sports, such as chess, that are also considered to be sports. The key factor is that there is some level of competition involved. Golf meets all of these criteria, which is why it can be considered a sport.

Why Don’t People Think Golf is a Sport?

Some people don’t think golf is a sport because it can be played without getting too sweaty or out of breath. It’s not as high-impact as other sports, such as football or basketball, and it doesn’t require the same level of fitness.

Golf is also considered a “gentleman’s sport,” which might make some people think it’s not a real sport.

Golfers may also like:  Golf Course Superintendent - A Good Job?

The apparent sedentary nature of golf and the stereotype that it is a rich person’s sport are likely the two biggest reasons why people don’t consider it a real sport. Golfers won’t go running toward a ball or have to jump to make a shot, and the equipment can be quite expensive.

Additionally, golf wasn’t an Olympic sport until 2016, which might make some people question its legitimacy as a sport. However, golf is now an official sport in the Olympics, which should help change the perception that it’s not a real sport.

What Kind of Sport is Golf?

Golf is a club-and-ball sport, which means that golfers use clubs and balls to play the game. The objective is to hit the ball into a hole without going over the course’s par, and the player with the lowest score at the end of the game wins.

There are several types of golf, such as mini-golf, disc golf, and footgolf.

Many do not consider club-and-ball sports to be true sports because they lack the level of physical exertion that is typically associated with other sports. However, golf does require some level of fitness, as well as skill and precision.

Is Golf a Sport for the Rich?

Golf is not a sport for the rich. It just so happens that those who can afford to play golf, usually have more disposable income. The main cost of playing golf comes from the equipment needed to play, such as clubs, tees, and balls.

Golfers may also like:  Beverage Cart Attendant Guide (is this Job for Me?)

Plus, there are greens fees to play at a golf course, and if you want someone to caddy for you, it will add to the cost.

But despite all of this, golf is a game that anyone can play regardless of their income level. There are public golf courses all over the US that offer good rates, and there are ways to get discounts on equipment and green fees.

So don’t let the perception that golf is only for the rich stop you from playing this great game.

Golf is a sport because it meets all of the criteria that are typically associated with sports. It is a competitive game that requires skill, precision, and fitness – all of which are qualities of a sport.

So next time someone tells you that golf isn’t a real sport, you can confidently tell them that they’re mistaken. Golf is most definitely a sport!