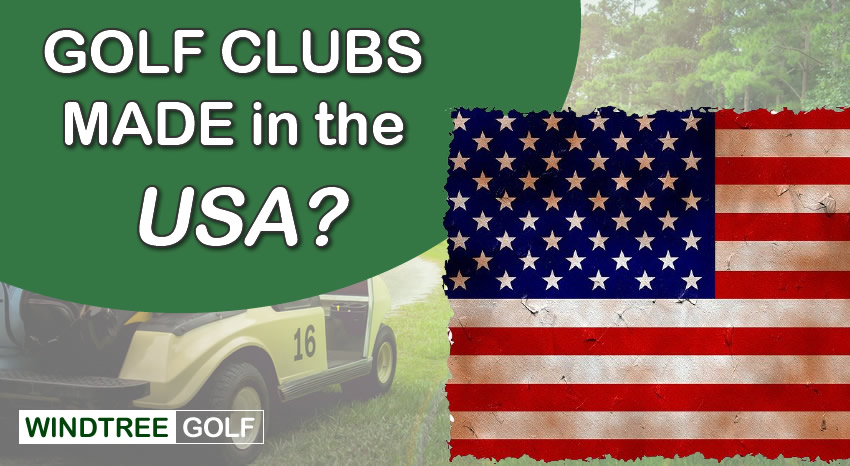 Whether you’re a recreational club golfer or a PGA Tour professional, one of the most important decisions you face is which golf clubs you should buy.

The good news for American golfers is that some of the best clubs from the biggest brands in golf are manufactured in the USA, even if their supply chain is heavily reliant on the Asian market.

While there are several factors that are likely to influence your decision, more and more US-based golfers are keen to play with clubs that have been made in America, which is more than understandable.

To help you choose your equipment, we explore whether the likes of Titleist, PING, TaylorMade, Tour Edge, Callaway, and PXG manufacture their clubs in the USA.

We also reveal which pros use certain clubs, which might influence your decision about which irons to play!

Ready to dive in? Let’s go.

Are There Any Golf Clubs Made in the USA?

Yes, many of the biggest brands in golf manufacture their golf clubs in the USA. But given an increase in production and labor costs in the US in recent years, several companies have outsourced part of the production process to Asian markets to keep the prices of their clubs affordable.

That being said, we look at some of the biggest brands in golf and explain whether or not they’re American-made.

Are Titleist Golf Clubs Made in the USA?

Based out of Fairhaven, Massachusetts, Titleist golf clubs, balls, and apparel are manufactured in the United States. Outside of MA, Titleist owns and operates a manufacturing plant in Carlsbad, California, which is responsible for producing its golf clubs.

As with other golf brands, some of the materials used in Titleist equipment are sourced from Asia, but every Titleist club is assembled in the USA, undergoing rigorous quality-control in California before being released for the market.

You will probably be aware that Titleist is one of the biggest and most trusted brands in golf.

And perhaps the company’s most significant endorsement of all was when Tiger Woods started using Titleist’s Scotty Cameron putter in 1999, which has helped the brand achieve global success in the world of golf ever since.

Are PINGS Made in the USA?

Yes, PING golf clubs are still produced by the Karsten Manufacturing Factory in Phoenix, which has been the company’s USA base since the 1960s. PING’s milled putters are all hand-built from scratch in the USA, and all steel shafts and grips are also made in Arizona.

Apart from Titleist, PING is perhaps the best-known all-American golf brand based in Phoenix, Arizona.

Although widely renowned for the exceptional quality of its putters, PING also manufactures drivers, wedges, irons, and a range of associated golfing apparel.

Some of PING’s materials are sourced from China, such as the titanium used in the woods.

But thanks to PING’s industry-leading manufacturing process, the company has established a reputation as one of the most popular brands in golf.

Where are TaylorMade Clubs Made?

According to their website, TaylorMade clubs are also manufactured in Carlsbad, California, a short distance from Titleist’s manufacturing HQ.

But this only tells part of the story.

It has been well documented that TaylorMade made the move to China in 2007 when rising costs of production in the US made it unfeasible for the brand to continue working exclusively in the USA.

And although it has outsourced much of its production to China, TaylorMade is still an American-owned company, but there is a deal in the pipeline for the company to be sold to a Korean private equity firm.

TaylorMade is the chosen brand of dozens of PGA Tour pros, including US Stars Dustin Johnson and Ricky Fowler.

Are Tour Edge Golf Clubs Made in the USA?

Tour Edge golf clubs are ‘hand built’ and made in the company’s factory in Batavia, Illinois. The most recognizable Tour Edge clubs are Exotics, which are manufactured following a process known as ‘brazing.’

This is a complex manufacturing process that reduces the weight of the club and also enhances the pliancy of the clubface.

Although Tour Edge golf clubs started out as a budget golf brand, they have risen to prominence and now provide excellent-quality clubs to Tour professionals.

Since the launch of the brand, more than seventy golfers playing on the PGA Tour have used Tour Edge Exotic clubs.

High-profile players including Bernhard Langer, Scott McCarron, Duffy Waldorf, and Tim Petrovic all endorse and use Tour Edge golf clubs, which has helped to propel the brand to the forefront of the golf industry.

Is Callaway Golf an American Company?

In the USA, Callaway golf clubs are manufactured in Carlsbad, California, but they also have distribution plants in Toronto, Canada, and Monterrey, Mexico.

Callaway Golf is another American company that has developed an excellent reputation for building high-quality golf clubs and producing instantly recognizable apparel.

The company was founded in 1982 when businessman Ely Callaway purchased a share in the Hickory Sticks USA golf company.

Such has been Callaway’s success that the company has bought out rivals and competitors in a range of high-profile mergers.

Odyssey, Jack Wolfskin, and OGIO are just some of the brands that Callaway has taken under its wing in recent years.

After enjoying huge success by releasing their Big Bertha irons and drivers in the nineties, the recent production of X Hot, XR, and, latterly, GBB Epic irons have been equally as popular.

What Irons are Made in the USA?

Golf irons from Titleist, PING, TaylorMade and Callaway Golf are made in the USA, some of which are used on the PGA Tour.

To give you an idea of some of the latest golf irons that have been manufactured stateside, we’ve provided a list below:

Some Wilson and Cobra irons are also manufactured in the USA.

However, it’s important to introduce a caveat in relation to the manufacturing of golf clubs.

While these brands do indeed have manufacturing plants in the USA and declare their clubs to be hand-assembled or built-in America, many of the clubs’ component parts come from Asia.

Some clubs are even forged or built-in Asia (most notably TaylorMade) and then ‘assembled’ in the USA.

As such, it’s important to recognize the reality of global manufacturing in the present day.

While your clubs might be USA assembled or built, the Asian market has almost certainly played a part in the manufacture of your clubs at some stage of the process.

Are PXG Clubs Made in the USA?

PXG is a golf club brand that has its manufacturing base in the USA. Located in Scottsdale, Arizona, PXG stands for Parsons Xtreme Golf and was founded by billionaire GoDaddy founder Bob Parsons.

Parsons built the brand because he believed that he could get more out of his golf equipment.

PXG’s approach to manufacturing and the fact that all clubs are produced in the USA contributes to the high prices associated with the equipment (irons start from $249 per club, for instance!).

Zach Johnson, Pat Perez, and James Hahn are just three of many golfers that use PXG clubs, and the brand is widely seen as one of the best and most exclusive in the world of golf.

Yes – It’s Still Possible to Buy US Made Golf Clubs!

As we have explored, many golf clubs are made in the USA, including those produced by the biggest brands in golf.

However, it’s important to realize that perhaps with the exception of PXG, almost every other brand outsources an element of the production process to Asia.

Some clubs are forged in Asia and then assembled in the USA, while others are put together with component parts that have been sourced in the far east.

Ultimately, the likes of PING, Titleist, and PXG represent the best in American golf club manufacturing and would be a stellar choice if you’re looking for the best-quality, American-built golf clubs.