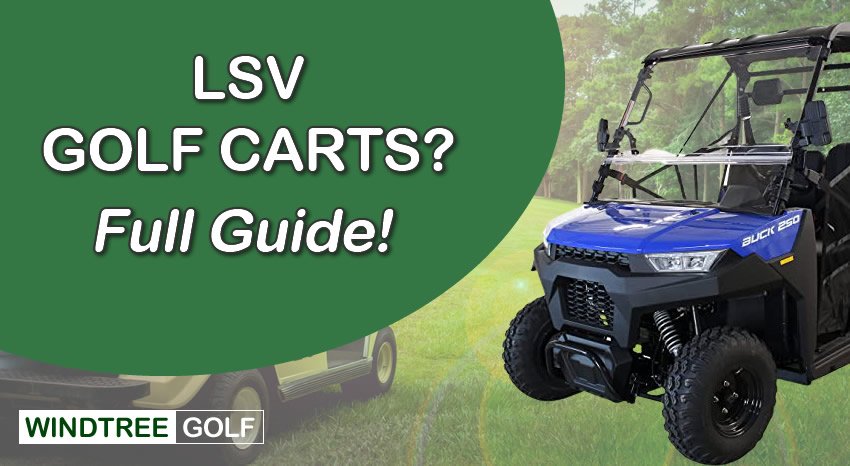 LSV or otherwise called “Low-Speed Vehicles” is a type of vehicle that belongs to the golf cart and NEV family. These vehicles are used for driving around the golf course, on vacations, and for other day-to-day purposes. These are generally economical to maintain, and fun to drive.

But what is actually an LSV? How is it different from a regular golf cart? Is an LSV road legal? Where can you buy an LSV and where would you be able to get the spare parts from?

We have all the answers to your questions and the details that you’re looking for.

Let’s take a detailed look at LSV and understand more about these vehicles, especially in comparison with golf carts. So, you must get to the end of this comprehensive LSV golf cart guide.

What is an LSV Golf Cart?

An LSV golf cart is a certified vehicle that can be used on the golf course to transport players from hole to hole. According to a legal definition, a Low-Speed Vehicle (LSV) is a vehicle with four wheels, with maximum speed in the range of 20 – 25 miles per hour, on a paved level surface.

An LSV has to have a maximum load limited to 3,000 pounds (including accessories, passengers, and its own frame). These vehicles are usually road legal and used by authorities for different purposes as well.

These types of vehicles are becoming quite common, owing to the utility and convenience they offer. Very economical to maintain, and no need to have a license to take an LSV for a ride on private land.

Golfers may also like:  4x4 Golf Carts: Should I Convert or Buy? (The Facts!)

The main difference between both vehicles is that an LSV is road legal under federal law. Although both types of vehicles look similar they have other noticeable differences between them. Such as speed limit, powertrain, overall build and configurations, safety standards, and price.

Also, there could be many other differences between an LSV and a golf cart according to motor authorities. But there are certain differences that should be highlighted for potential buyers and enthusiasts to understand, to make an informed decision while buying.

How Much Does an LSV Golf Cart Cost?

All the manufacturers have different prices for their LSV golf carts, based on features and accessories offered with the vehicle. But across the market, the price is between $8,000 and $11,000 for a new model in the US.

Here is a list of some popular LSV golf carts with prices, for your reference:

Does EZ-GO Make an LSV?

Yes, EZ-GO is a manufacturer of premium golf carts and has a flagship LSV in its portfolio. It’s called EZ-GO 2Five electric cart, which has gained momentum in the market and growing followership due to its golf-centric features and value for money. The vehicle is manufactured in Georgia, US.

The EZ-GO 2Five has the following 5 stand out features and specifications:

EZ-GO 2Five is one of the best LSV golf carts available for purchase right now and has good features to meet both golf course and on-road vehicle requirements.

Golfers may also like:  GC2 Golf Cart Battery (Should I Use These Batteries?)

Who Else Makes SV Golf Carts?

Apart from EZ-GO, there are other manufacturers that produce golf cart LSVs with different powertrain, features, accessories and have varying prices. These include Club Car, Tomberlin, Yamaha, and Star EV.

All the manufacturers produce LSVs with different options and configurations. Let’s have an in-depth look at these products by other brands:

Although not built to break speed records or hit top speeds on the tarmac, LSVs have a certain speed limit and performance configurations. All the LSVs have to comply with the 20-25 mph speed limit, set by motor authorities. But the performance can be enhanced by aftermarket modifications.

All the LSV golf carts have to stick to the 25 mph speed limit mandate and can reach these speeds easily. Tomberlin E-MERGE E2 GT is a fast LSV and can hit 0-25 mph in 6 seconds.

With some modifications, the acceleration and torque can be enhanced for better performance by:

If you’re looking at a used LSV to buy for yourself, there are many places you could look to. The ideal pace is to get a certified pre-owned LSV from an authorized dealer, or online from an “enthusiasts” forum from the people who look after vehicles.

There are many places where you could buy a used LSV. There are many things to consider when buying an LSV, such as mileage, condition, and accessories.

Golfers may also like:  Golf Carts for Sale Pensacola: New and Used

The best place to buy an LSV is the authorized dealership. They have certified pre-owned vehicles, that have been inspected for any faults and malfunctions rectified.

Dealers also offer a limited warranty on these sales. With a certified purchase, you’d buy peace of mind as well.

Other places include private dealers, Facebook Marketplace, eBay, and Craigslist. You could explore thousands of options, but be careful while making a deal and get the LSV inspected before paying up.

What is the Best LSV Golf Cart?

Currently, the Star EV Sirius is the best LSV golf cart you could buy due to its unrivaled, high specced features and smooth driving performance. But all the popular US manufacturers produce great LSVs that have particular features and different specifications.

Check out the video below where you can see this vehicle in action:

It is up to the buyers to select the vehicle and choose the one that best suits their needs.

The following features make Star EV Sirius one of the best LSVs in the market:

LSV or Low-Speed Vehicle is a type of golf cart, which is road legal and has certain specifications. A speed limit of 20-25 mph, max weight of 3,000 lbs, and have 4 wheels.

There are many different LSVs in the market, offered by different manufacturers, and have different specifications & configurations. Most are priced between $7,500 and $11,000 and have better safety and amenity features as compared to regular golf carts.

If you’re looking to buy an LSV, the best place is an authorized dealership and the best bet is a certified pre-owned vehicle. These are reliable and thoroughly inspected by factory technicians before putting up for sale. The extra bucks are for the peace of mind that you get with the purchase.