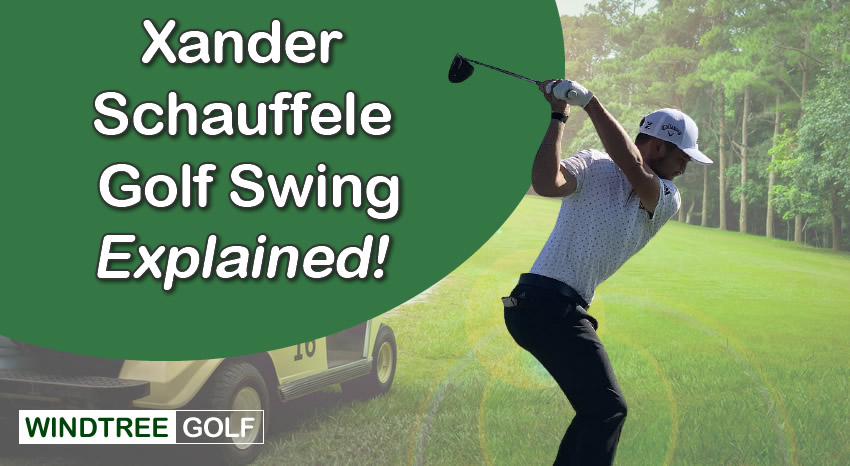 When you consider the modern-day elite golfer, it’s hard not to be infatuated by the purity and consistency of their swings.

They seem to leverage power and speed that we recreational golfers can only dream of, which enables them to hit consistently high, long, and accurate shots.

And a player with one of the best swings on the PGA Tour today is American Xander Schauffele.

For a relatively small guy, Xander consistently finds himself amongst the longest hitters on tour and is able to place at tournament after tournament.

But how does he do it? What’s the method behind his near-perfect golf swing? And what equipment does he carry in the bag to help him perfect his shots?

This post explains some of the mechanics behind Xander’s incredible swing and provides you with an insight into what the American carries in his bag.

Xander Scauffele has worked with one swing coach his whole life – his father, Stefan – who is largely responsible for helping him develop one of the purest swings in the game.

Let’s break Xander’s swing down even further and look at some of the reasons why it’s one of the very best in the business.

What is Xander Schauffele’s Swing Speed?

Xander Schauffele has a current swing speed average of 119.19mph, according to the latest PGA Tour statistics. This ranks him 30th behind the likes of Sergio Garcia, Adam Scott, Rory McIlroy, and Matthew Wolff, who currently has the fastest swing speed on tour.

Typically, the PGA Tour average for swing speed is around 110mph, but the fastest swing speeds often exceed 125mph.

This puts Xander’s current swing speed slightly above average but by no means the fastest on tour.

One important thing to remember about swing speed is that it changes from round to round and depends on several factors.

A golfer’s swing speed will fluctuate from time to time-based upon their performance, so you should only take Xander’s current swing speed as a guide.

Does Xander Schauffele Have a One-Plane Swing?

Xander Schaufelle’s swing is regarded as a one-plane swing. This means that the position of his left arm at the top of his backswing matches the tilt of his shoulders when he’s looking down the target line.

If you analyze Xander’s swing, you will find that his shoulder and hip planes are identical, which contributes to his consistent ball-striking ability.

Given Xander’s relatively small size and body weight (5’10’ 175kgs), it’s all the more impressive that he typically ranks in the top 20 for driving distance.

He has a current average distance of 322.10yds, which is longer than John Rahm, Justin Thomas, and Jordan Speith, to name just a few.

Xander is widely regarded as one of the finest ball strikers on tour, and his consistent and accurate swing certainly makes up for what he lacks in size and enables him to hit consistently long and accurate drives.

What Shaft Does Xander Schauffele Use?

As you might expect from one of the top players on the PGA Tour, Xander has a range of custom shafts on his clubs. According to a piece in Golf Monthly, we know that Schauffele uses the following shafts:

Golfers may also like:  What is a Tight Lie in Golf? Explained with Video!

His choice of graphite shafts on his driver and woods means his clubs have a lighter feel, and this helps to improve both his distance and accuracy.

Ask any golfer about the importance of their shafts, and they will tell you that it’s one of the most vital considerations when trying to improve consistency, as a good-feeling shaft enables them to hit the center of the face, which therefore enables clean ball striking.

As you might expect from Xander’s club choice, he’s gone for the best in the business, and his custom clubs are one of the reasons behind his successes out on the course.

What Driver Does Xander Schauffele Use?

For a long time, Xander used a Callaway Mavrik Sub Zero driver, but as of fall 2021, he switched to an Epic Speed Triple Diamond model.

He has used Callaway clubs for a while and has enjoyed great success off the tee in recent tournaments.

In addition to his Callaway driver, here’s what else you will find in the talented American’s bag:

Like other pros on the PGA Tour, Xander has a lucrative sponsorship deal with Callaway and has access to the best and most recent equipment to enhance his game.

Callaway is one of the most trusted American golf brands and is used by many other notable players on tour.

What Putter Does Xander Schauffele Use?

When he’s on the green, Xander uses an Odyssey O-Works #7 CH Red putter and has switched between the armlock and regular version. It’s a surprise to many that Xander has recently used an armlock grip, given the fact that he has been an outspoken critic of the banning of this particular type of putter.

One thing that Xander’s fans might notice is that he regularly switches the putter that he carries in his bag. In this year alone, he has used an Odyssey Stroke Lab Tuttle, an Odyssey Toulon Design prototype, and a Stroke Lab 7 at various courses this season.

Golfers may also like:  How to Fix a Driver Slice in Golf (Best Working Ways!)

To be fair, golfers switching between putters is more common than you might think.

Typically, recreational players will stick with the same putter for several years. But at the elite level of the game, pros opt for different putters on certain courses, as they look for the slightest advantage over their competitors.

And it’s not only Xander who swears by Odyssey – dubbed the number one putter in golf.

As of this fall, Odyssey had racked up an impressive 121 PGA Tour wins and remains the putter of choice of the likes of Phil Mickelson, Sergio Garcia, and Francesco Molinari.

Has Xander Schauffele Won a Major?

Although Xander Schauffele has never won a major, he has tied second twice in major championships – at the 2018 Open Championship and the 2019 Masters. His career highlight to date was winning the gold medal for the United States at the men’s individual golf event at the 2020 summer Olympic games.

He has also won four times on the PGA Tour at the following events:

He was selected in the 2019 Presidents Cup team, as well as the 2020 Ryder Cup team that swept the Europeans aside at Whistling Straits.

Ultimately, Xander has had a successful career since turning pro in 2015, and most golf fans are of the opinion that it’s only a matter of time until he wins a major.

Who wouldn’t love to strike the ball as cleanly as Olympic gold medallist Xander Schauffle? For a relatively small guy, he’s remarkably long off the tee, which is down to his consistent ball striking and his ability to generate power through his wide arching swing.

As we’ve also explained, he uses the best equipment available to him and benefits from the latest in Callaway technology to perfect his game.

And while Xander is yet to win a major championship, it surely can’t be long until this talented American slips on the green jacket or lifts the claret jug in front of his peers.