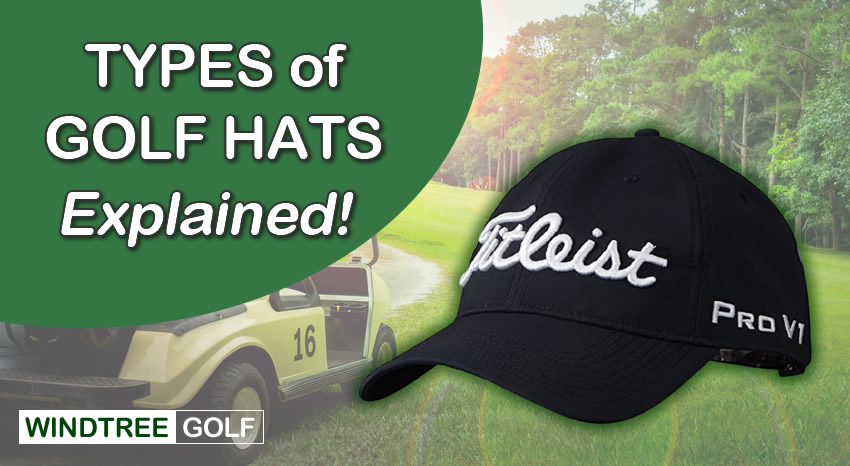 Golfers all around the world wear different types of hats while they’re out on the course. Players tend to select their headwear based upon its comfort and style, but they will also consider the climate and the suitability of the hat for the weather conditions.

The bottom line is that golfer hats come in various names, styles, colors, and designs, and we introduce some of the most popular hats worn on the golf course in the following sections.

What are the Main Types of Golfer Hats?

When you’re out on the course, you can wear the main type of golf hat which includes a baseball cap, an ivy cap, a bucket hat, a visor, and a range of other hats that serve different purposes.

Most golfers choose their hats based upon style, weather, and comfort, and we introduce some of the most popular types of golfers hats below.

What is a Golf Ivy Cap?

An ivy cap is also known as a flat cap, which has a stiff, short brim at the front and is usually made of cotton, tweed, or leather. Ivy caps have been around for centuries and were popular attire for golfers like Old Tom Morris and Harry Vardon back in the day.

Having been worn in British society since the fourteenth century, ivy caps have never enjoyed the same popularity level in America.

However, they’re still a stellar choice if you’re going for a vintage look when you’re out on the course.

A range of manufacturers produces Ivy hats, but the most popular brand is perhaps Kangol, which makes ivy hats in various colors and styles.

You’re unlikely to find ivy hats produced and branded by some of the most prevalent golf brands, but they can still be a fun and novel addition to your golf attire all the same.

What is a Ben Hogan Hat?

A Ben Hogan cap is actually just an ivy cap or flat cap (all called a newsboy cap) but named after one of the finest golfers of all time due to his headwear preference while he was out on the course.

Hogan was an exceptional golfer throughout his 41-year career, winning nine majors and gaining a reputation for possessing one of the finest and purest swings in golfing history.

Golfers in the present day who are keen to replicate Hogan’s style out on the course can opt for a flat cap or ivy cap, which will evoke memories of Hogan’s appearance at the 1950 US Open at Merion.

He famously hit a 1-iron onto the eighteenth green, which in itself is considered to be one of the best shots ever seen at a major.

You can also buy a range of Ben Hogan branded hats, which are on sale from the Ben Hogan golf company.

Popular hats include baseball caps and visors, and while Hogan himself preferred a flat cap, his golfing range is more in keeping with fashion preferences in modern times.

What is Bryson DeChambeau’s Hat?

Bryson DeChambeau wears a driving cap when he takes to the tee at major competitions, making him stand out from his competitors who tend to wear baseball caps. DeChambeau is currently sponsored by Puma, whose branding is present on his driving cap and other clothing.

Although not quite the same as an ivy cap, DeChambeau’s driving cap is undoubtedly inspired by the vintage hats worn by the likes of Hogan, Morris, and Vardon

However, DeChambeau’s unique fashion sense doesn’t help him improve his public image, and he remains one of the most divisive players on the PGA Tour.

Known for his uber-analytical style to the game, DeChambeau has long been lambasted for slow play and is considered by his fellow professionals as one of the worst playing partners due to his snail-like speed on the course.

It’s a shame that Bryson’s driving hat doesn’t encourage speed as much as it incites comments about his appearance and overall approach to the game!

Can You Wear a Baseball Cap to Play Golf?

Baseball caps are the most popular type of hat worn by golfers and are allowed for recreational and professional players to wear a range of baseball caps out on the course. Golfers wear baseball caps because they protect their head and face from the sun, and improve their ability to track the ball.

In the professional game, players wear caps to show off their sponsors, often plastered on the front, back, and sides of their hats.

Eagle-eyed TV viewers will notice that almost every golfer on tour wears a cap of some sort, but they vary significantly in design, color, and style.

Essentially, for recreational golfers, there are no restrictions on the type of baseball cap permitted, but just remember to keep it PG, as you may encounter youngsters and families out on the course!

Can You Wear a Bucket Hat to Play Golf?

If you regularly play golf in the searing heat and sunshine, or in the pouring rain, yes, you can choose to wear a bucket hand instead of the more commonly worn baseball caps and visors. Bucket hats offer more protection from the elements and are worn by both pros and recreational golfers alike.
Related Article  The Most Breathable Golf Shoes that Look Great!

Lots of the biggest brands in golf carry a range of bucket hats that can be worn out on the course.

You could also choose to wear a bucket hat from a famous brand such as Adidas, Puma, or Nike, which isn’t necessarily a golf-specific hat.

Traditionally, older golfers wear bucket hats on the course, but the range of styles and colors available today make them much more appealing to younger players.

On the PGA Tour, golfer Joel Dahmen is rarely seen without his bucket hat, which he has worn throughout his recent health issues.

Regardless of your reason for wearing a bucket hat, they are a great addition to your golf wardrobe and are equally as stylish and practical as baseball caps and visors.

Do All Pro Golfers Wear Hats?

Although the majority of professional golfers wear some type of hat, not every pro wears a cap while they’re out on the course. Viewers of golf will be accustomed to seeing a range of styles and colors of hats from the biggest brands in golf that have been personalized with the player’s sponsor.

In the days before sponsorship became such a lucrative draw for pro golfers, it wasn’t uncommon to see players out on the course without a hat.

The likes of Jack Nicklaus and Arnold Palmer would regularly play golf without a hat, and in more recent times, Nick Faldo and Jon Daly have let their hair fall out for all to see.

European players often forego hats during the Ryder Cup, with Graeme McDowell, Luke Donald, and Lee Westwood all leaving their hats in the locker room before competing with their American counterparts at the famous tournament in recent years.

Ultimately, there’s no requirement for professional golfers to wear any type of hat, and their decision to do so is a personal one.

But given the protection, a hat offers from the elements, as well as the fact that they’re handsomely paid by their sponsors to wear them, it’s perhaps little surprise that the vast majority of tour golfers regard a hat as an essential item of clothing.

What Golfers Hat Suits Your Style?

Professional and recreational golfers alike tend to wear hats while they’re out on the course.

As well as offering protection from the sun and rain, professional golfers wear hats to promote their sponsors when the TV cameras are on them.

As we’ve discussed, golfers can wear a huge range of hats, be it traditional ivy caps like Ben Hogan, baseball caps like many of the professionals currently on tour, or even stylish bucket hats that offer additional protection from the elements.

The decision about which hat to wear for golf is ultimately a personal one, with many golfers possessing a range of hats that they wear from time to time.

So now you know what golfer’s hats are called – which suits your style?