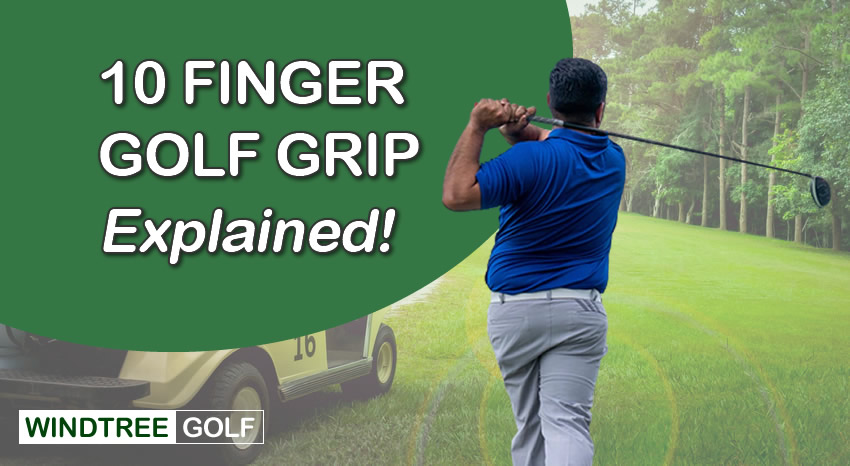 One of the first things you learn as you begin your practice out on the range is how to hold a golf club correctly. Most golfers employ an interlocking or overlapping grip, as these are typically regarded as the best ways to hold your club for ultimate control.

But what about the ten-finger golf grip? Is it a viable option for you?

Granted, you don’t see the ten-finger golf grip very often, but thanks to its simplicity and level of comfort, we think it’s definitely worth considering if you’re looking for a new way of holding your golf clubs.

To help you decide if it’s for you, we look at seven facts about the ten-finger golf grip below.

What is a Ten-Finger Grip in Golf?

The ten-finger grip is the most basic in the game. It takes its name from the fact that all of your fingers touch the club when you’re gripping, but it’s also sometimes referred to as the baseball or natural grip.

While it’s most commonly associated with beginners, the ten-finger grip is also used at various levels of the game. PGA Tour pro Scott Piercy, for instance, famously won on tour using a ten-finger grip, much to the surprise of many!

The interlock grip is similar to the ten-finger grip but gets its name from the fact that you place the pinky of your right hand between the index and middle finger of your left. This interlocking movement provides you with more control over the club.

It basically means it is less likely to slip out of your hand upon impact.

Switching from a ten-finger grip to an interlocking grip helps you feel more secure when you’re standing over the ball, and limits your likelihood of hitting a wayward shot.

The ten-finger grip is, without doubt, the easiest way to hold a golf club and is often the first grip that beginners try when practicing out on the range for the first time.

While the decision about which grip to proceed with is largely down to personal preference, most golfers use an interlocking or overlapping grip, as opposed to the simple ten-finger grip.

While you don’t have to switch right away, it’s good practice to tighten your grip by interlocking your fingers when you increase your confidence out on the range.

This is because it’s much easier to make the switch between grips when you’re still learning as opposed to later on when you’re more settled in your rhythm and swing.

Do Any Pros Use a Ten-Finger Golf Grip?

Scott Piercy is perhaps the highest-profile PGA Tour pro to have used a ten-finger golf grip. The American has had a successful career on tour, with four PGA Tour victories under his belt and a career-low round of 61 to boast.

Another pro golfer who used a ten-finger grip for large parts of his career is Bob Estes, although he switched to a more conventional interlocking grip after struggling on tour for a few seasons.

You will find that players sometimes change their grips when things aren’t going their way.

And because this technique is simple and easy to get a feel for your swing when using the ten-finger grip, it presents itself as a great option for people looking to switch things up a little.

Is the Ten Finger Grip Bad?

For some golfers, the ten-finger grip should not be used. The reason that it isn’t used as frequently as the interlocking or overlapping grip is that it doesn’t afford you as much control over the golf club, which makes it more difficult to hit straighter and more consistent shots.

Also, when you use a ten-finger grip, you limit your capability in terms of clubhead speed, as if you swing too fast, you will end up losing control of the golf club.

Anyone who has ever used the ten-finger grip will acknowledge the feeling of the golf club slipping out of their hands once in a while, and this is the biggest drawback with gripping the golf club in this way.

Golfers with smaller hands will also potentially struggle with the ten-finger grip, as it can often feel like the golf club is too big for your hands when you hold it like a baseball bat.

Of course, it’s also a good idea to adjust the grip size if your hands are particularly small and this is even more important if you use a ten-finger grip.

As we’ve already mentioned, Scott Piercy has won on the PGA Tour four times using a ten-finger grip, so it’s amiss to say that it’s bad. It’s just not the chosen grip of many golfers, particularly at the top level of the game.

How Do You Hold a Ten Finger Grip?

To hold a ten-finger grip properly you need to implement a 5 step method that consists of a grip procedure, proper finger placement, and extended practice to ensure you are comfortable with this simple technique.

The beauty of using a ten-finger grip to hold your golf club is that it is extremely straightforward.

You don’t need to worry too much about the alignment of your hands, as you can simply hold the club like you would pick up a baseball bat ready to face a pitch.

But if you’re just starting out in golf, here are the steps you need to follow to hold a ten-finger grip the right way:

As you can see, there’s not a great deal to the ten-finger golf grip and it’s simplicity is it’s most attractive feature.

For anyone that is new to golf and just trying it for the first time, there’s no doubt that using a ten-finger grip can help as you get a feel for your swing.

The best thing about a ten-finger golf grip is how simple it is. If you’ve never picked up a golf club in your life, placing your hands on the grip one below the other is by far and away the easiest way to hold the club as you work out the various mechanisms involved with your swing.

Another advantage of holding the golf club in this way is that it’s comfortable and there’s very little strain on your hands and wrists.

Golfers may also like:  Golf Open Stance: The Benefits that Make it Work for You!

This reduces the likelihood of suffering from repetitive strain injuries as your hands are in a very natural position.

Something else that golfers like about the ten-finger grip is that it feels like a very natural way to hold the club.

When you get into the intricacies of the perfect interlocking or overlapping grip, the way you hold the club is likely to feel completely alien, which is off-putting for beginners.

So, while it’s certainly not the perfect way to hold a golf club if the ten-finger grip works for you, then there’s absolutely no reason why you shouldn’t roll with it.

Should Seniors Use a Ten-Finger Golf Grip?

The ten-finger grip is a great option for senior golfers or those suffering from arthritis. The reason for this is that the grip is completely natural, and doesn’t involve the interlocking of your hands or fingers in any way.

When you use an interlocking or overlapping grip, it can lead to strain and pain in your joints, which is far from ideal when you’re a senior.

If you find yourself struggling with your grip as you get older, there’s no harm in switching to a ten-finger grip to see how it feels.

After all, if it improves your comfort levels and enjoyment out on the course, then it’s well worth making the switch.

As well as being useful for seniors, the ten-finger grip is a good option for kids and beginner golfers.

As mentioned, there’s nothing taxing about gripping the golf club in this way, and it ensures you can get a feel for your golf swing without getting too caught up on the intricacies of your grip.

Overall, we think a ten-finger grip is a great option for seniors and those just starting out, as it ensures you can develop some confidence out on the range while feeling good.

Good Golf Grip for Most – Have You Tried it?

While some golfers might scoff at the idea of using a ten-finger golf grip, we think that it’s a perfectly viable option for players at all levels of the game.

Granted, it doesn’t offer as much control over the golf club as other grips, but it is extremely simple and comfortable.

It’s a good solution for players who don’t like using the overlapping or interlocking grip and it’s well worth trying if you’re planning to mix things up a little out on the range.