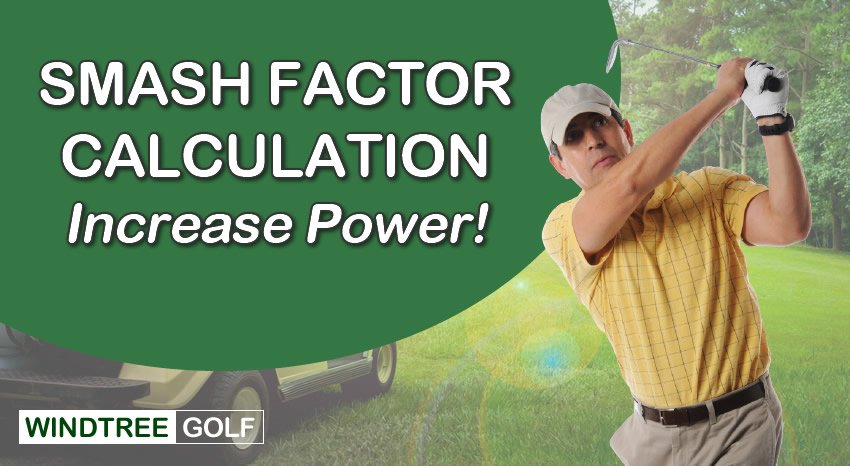 Increasing your smash factor in golf is undoubtedly a good way to increase the power of your shots and hopefully add some distance to your game.

But what exactly is your smash factor? How do you work it out? And why is it an important metric to think about?

Below, we explain everything you need to know about the smash factor calculation in golf and provide you with some top tips on what to consider when you’re trying to increase your power.

How Do I Calculate My Smash Factor?

The calculation indicates how much ball speed you’re getting for a given clubhead speed. Although it’s an interesting metric, particularly for big hitters off the tee, it’s not actually as important as ball speed and launch angle when it comes to a driver fitting.

Still, calculating your smash factor is a good way to see how well you transfer energy from the clubhead to the golf ball, and it provides you with another aspect of your game to work on.

You should be mindful that different clubs typically have a different smash rating, so you can’t necessarily aim for the same figure for each club. Below, we take a look at smash factor in more detail and explain why it’s a useful metric to understand.

What is a Good Smash Factor?

A smash factor of 1.5 is considered above average, but most recreational golfers have a smash factor of around 1.44. Typically, better players boast a higher smash factor, regardless of the club they’re playing.

The table below provides you with an idea of what to aim for when it comes to your smash factor:

Golfers may also like:  Ten Finger Grip in Golf (6 Facts to Check Out! )

As the table shows, bogey golfers (18 HCP) should aim for a smash factor of around 1.43, while higher handicappers are likely to be in around the 1.39 mark.

Don’t get too caught up on your smash factor if you’re just starting out in the game. It’s much more important to go through the motions of your swing and improve your ball striking instead of trying to rip the paint off the golf ball.

What Does Smash Factor Indicate?

Smash factor indicates the amount of energy you have transferred from the clubhead to the golf ball. The higher the smash factor, the better the energy transfer. Elite golfers hope to have a smash factor of around 1.50 when driving, which means a 100mph clubhead speed and 150mph ball speed.

However, it’s important to note that this power measurement in golf differs from club to club. For instance, the average smash factor of a six-iron for pros is 1.38, while a PW will likely have a smash factor of around 1.25.

This data shows pro golfers how well they’re transferring energy to the ball, which can help them maximize their distances.

For recreational golfers who are less reliant on stats, this calculation isn’t always deemed particularly important. However, understanding what it means and being able to calculate your smash factor can help you identify areas of your game for improvement.

Scheduling some lessons with a golf pro and asking to work on your smash factor will improve your energy transfer and will hopefully lead to longer drives, which is something that all golfers can get on board with.

What Contributes to Smash Factor?

One of the most important challenges for golfers to overcome is finding the sweet spot of the club they are using. If you hit your driver from the toe or heel, you won’t be able to generate sufficient energy transfer, which will affect the accuracy and distance of your drive.

It might sound obvious, but the strength of your core also contributes to your smash factor. While the ability to middle the golf ball is as much to do with technique as it is to do with power, streamlining your swing and generating energy from your core will help you increase your overall power rating.

Players like Bryson DeChambeau, who are all about maximizing their distance out on the course, often employ single-plane swings, as there is less resistance.

When executed properly, a single plane swing can contribute significantly to smash factor and result in the ball flying even further.

Given that raw power, clubhead, and ball speed are inexorably linked, working on the component parts of your swing will help you increase your smash factor, as we explain below.

How Do I Increase My Driver’s Smash Factor?

One of the simplest adjustments to increase a driver smash factor is to whip the club shaft when executing your downswing. This is because you generate as much as 75% of the overall speed of the clubhead by speeding up the transition of your wrists on the downswing.

Doing so creates a whipping sensation when you play down on the shot, which helps you generate much more clubhead speed as a result.

For many recreational golfers, increasing your driver’s smash factor isn’t actually necessary. While it might help you gain a little bit of distance, it will be more difficult to control your drives, as you’re increasing your clubhead and ball speed by default.

This can sometimes result in you swinging yourself off your feet or even hitting an air shot! While it’s undoubtedly appealing to boast a smash factor similar to that of the longest-hitting pros on tour, it’s not necessarily a good idea.

So, if you’re hoping to increase your driver’s smash factor, practice on the range first and maybe even schedule a lesson with a pro to talk things through.

How Do You Increase Your Smash Factor with Irons?

The best way of potentially increasing smash factor with your irons is to use the right grips on your clubs. The primary role of your grips is to prevent slippage, which increases your control over your shots.

Otherwise, increasing your smash factor with your irons is the same as increasing it with your driver. It’s about generating more clubhead and ball speed, and you can achieve this by creating a whipping sensation with the golf club on the downswing.

Golfers may also like:  What is a Golf Scramble? - Everything You Need to Know!

If your grips are too small or particularly worn, it will cause movement in the downswing and can limit your smash factor. It’s for this reason that grip diameter is so important, although it’s often overlooked by recreational golfers.

If you haven’t done so already, it’s a good idea to take your clubs to a fitter to get measured for the right-sized grips. After all, gripping your clubs properly will have a huge impact on your smash factor, as well as various other aspects of your game.

A low smash factor is caused by a low transfer of energy from the clubhead to the golf ball. In other words, it’s caused by a slow swing. But as anyone who has ever played golf will attest, there’s nothing wrong with swinging the club slowly if it gets your ball heading in the right direction.

Too often, beginner golfers and high handicappers try and hit the golf ball too hard, mimicking the swings they see on the PGA Tour.

But in reality, focusing on swinging through the ball and finding the sweet spot of the club is much more important than boosting swing power.

Another thing that may cause a low smash factor is hitting the ball off-center. The sweet spot of your driver and irons is designed in such a way that allows you to transfer the maximum amount of energy between club and ball.

Therefore, practicing middling the ball on your downswing or perhaps even adjusting your stance to ensure you play your shots with the center of the club can make a huge difference.

Are You Ready to Hit the Ball Further?

Although the smash factor calculation is a metric that is often overlooked in golf, understanding what it is and how to improve it can help you hit the ball further. While most pros aim for a smash factor of 1.50, recreational players are typically happy around the 1.45 mark.

But if you’re hoping to increase your smash factor, we’d encourage you to do so with caution. Focusing too much on increasing clubhead and ball speed can be detrimental to recreational players, particularly as it can cause you to lose rhythm and consistency.