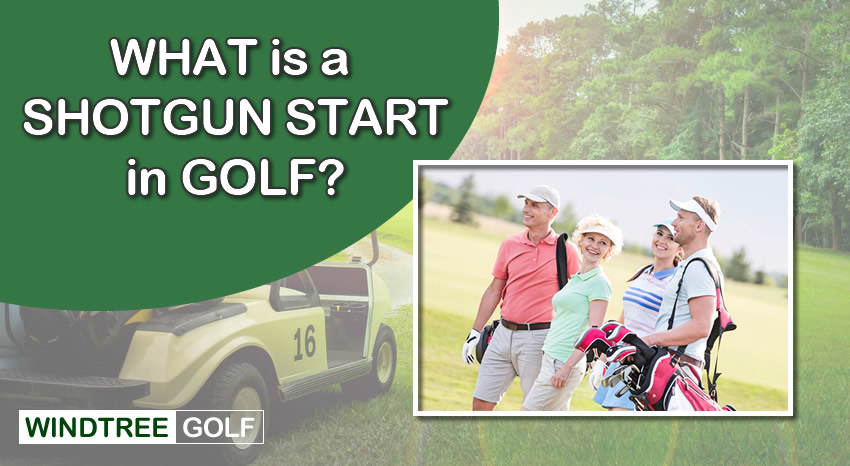 While lots of golf tournaments begin with allocated, staggered tee times, it’s not the only way to arrange the participating field.

A shotgun start in golf is described as participating players starting a round of golf at the same time, allocating groups of golfers to different tees before requiring them to start simultaneously.

There are many advantages to shotgun starts in golf, as players tend to finish at the same time, and golf course managers can get the course back open quickly for other paying customers.

If you’re about to participate in a shotgun start for the first time and are looking for some information about what to expect, then you’ve come to the right place. This article tells you all the ins and outs of the shotgun start, including several popular variations to the format.

But let’s begin with a detailed explanation of the shotgun start in golf, followed by an understanding of where the name for this format comes from.

The Shotgun Start in Golf Explained

A shotgun start is a way of organizing a golf tournament so that all players tee off at the same time from different parts of the course. So, instead of starting every group from the first tee, you can spread them out to begin on different holes across the course.

For example, if a group starts on the 14th hole, this would essentially be their first hole, while the 13th would be their equivalent to the 18th.

Shotgun starts are designed to help the flow of the course and ensure everyone finishes roughly at the same time.

Why is it Called a Shotgun Start?

It is called a shotgun start because takes its name from the fact that a shotgun was originally fired to signify the start of the round. The very first shotgun start was reportedly at Walla Walla Country Club in Washington in 1956.

Head professional, Jim Russell fired his weapon into the air to sound the start of play of a tournament back in 1956.

In the present day, you’re more likely to hear a claxon sound at the start of play or perhaps even receive a notification on your smartphone signifying that play is due to begin.

All players will be aware of the designated time for the shotgun start and will therefore be prepared to begin their round at the right moment.

How Does a Shotgun Start Work?

A shotgun start is an incredibly effective way of starting a tournament, and it positions players all over the course to tee off at the same time.

Tournament organizers favor this method as it gets players back into the clubhouse at a similar time. But what does it look like in practice?

Related Article  What is a Stinger Shot in Golf? - 5 Step Success Guide!

Well, let’s say you have eighteen fourballs (72 players) entered into a tournament.

In a shotgun start, each of the eighteen fourballs would make their way to a tee box and wait for the signal that play is due to begin.

On courses where there is the provision, players tend to be transported to the tees on golf carts, as it can be a long walk for some players!

When the signal sounds, play begins, and all groups tee off at the same time.

Providing play moves along at a consistent speed, every group will finish their game at roughly the same time and will be able to gather in the bar for the presentation and festivities without having to wait an eternity for the final group to finish their game.

What is a Modified Shotgun in Golf?

Each group is sent to a tee box to start their round at a specific time, and the golf course manager then works out what times need to be reserved for the players as they make their way back to the first tee.

It can be quite complex to manage the flow of a modified shotgun start, and mixing tournament players with recreational golfers can disrupt the pace of play somewhat.

Still, it’s a good option if you want to run a smaller competition and are hosting an event in the clubhouse after, as all golfers will finish at roughly the same time.

What is a Reverse Shotgun in Golf?

Let’s assume that you have 48 golfers and want to arrange a shotgun start.

That would be twelve foursomes starting simultaneously. In the reverse shotgun format, the players would begin from holes 1,18,17, through 7, instead of 1 through 12.

Because the last group is starting on 7 instead of 1, it clears the first tee more quickly and allows the course to open up to other players.

What is a Double Shotgun in Golf?

Tournaments with a large field of entrants that follow a shotgun start are referred to as a double shotgun. In this instance, organizers will give players the choice of two tee-off times, one early in the morning and one early in the afternoon.

Related Article  What is the Anti Roll Method in Golf? (vs. Technique!)

Although every player in the tournament wouldn’t finish at the same time, a double shotgun is an effective way of managing start times in particularly large tournaments.

But what happens if there is a slightly larger field than 72 players, but not enough to fill two tee times?

Well, let’s say you have 80 players split into 20 fourballs.

You can add your two extra groups on two par fives. When the first group tees off and then plays their second shots, the following groups can begin.

In this example, certain holes would be hosting a double shotgun start, while others would proceed as normal.

What is a Shotgun Scramble?

A shotgun scramble is a fun and inclusive format that requires players to team up and select the best ball to play from the tee. As it is a shotgun start, players are split into four balls and designated to tee off from around the course.

In a scramble, players form teams of two to four based upon the organizer’s instructions.

Every player is then required to play a tee shot.

The team captain then chooses the best shot, and all other team members pick up their balls and drop within one club-length of the chosen shot.

This process continues until the first player from the team knocks the ball into the hole.

The overall team score at the end of the hole is the total of the best shots.

A scramble format is a great option for players of all abilities, as there’s no pressure on attaining individual scores.

Charity golf days often follow a shotgun scramble format, as they’re enjoyable for all players and ensure the field finishes at the same time, which is ideal for the fundraising event and dinner that follows the game.

A shotgun start is a popular way of beginning golf tournaments around the world.

By starting groups simultaneously, it ensures that all golfers in the competition end at a similar time, making it easier to arrange the post-game meal, drinks, and awards ceremony.

It also makes life easier for the competition organizer, as they can review the scorecards all at once.

Allowing a tournament to proceed with a shotgun start is also ideal for golf course managers, as they can block out the tee times for the tournament in the morning before opening the course to other paying customers in the afternoon.

Ultimately, now you know what a shotgun start in golf is – a win-win starting format that is a great way of managing the field.