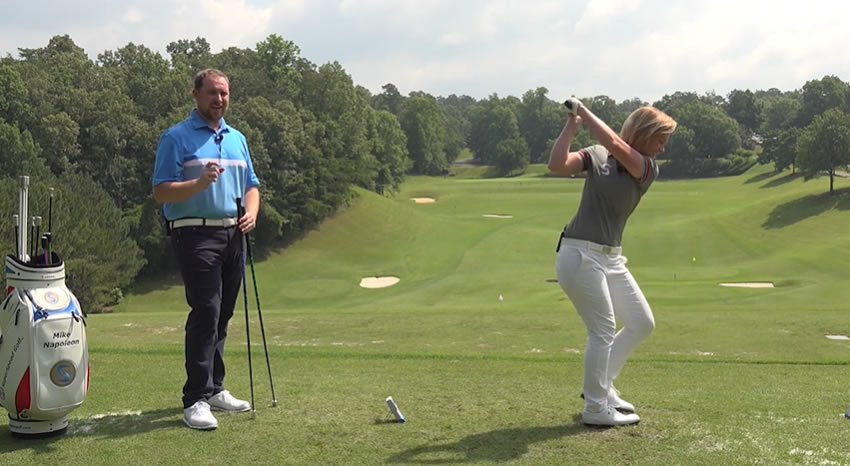 One of the biggest problems for golfers of all skill levels is curing the dreaded slice. It’s been killing golfer’s scores, confidence and ultimately, enjoyment of the game.

There have been countless methods through the years to cure the slice, and one of the latest is the Reverse Slice Sequence which is a modern golf technique aimed at fixing a sliced golf shot.

What is this method and is it a credible way for curing the slice?

What causes the slice and does something as simple as a strong grip work? What are some other tips to remove a horrific slice? We’ll take a look at all of this in an attempt to rid of the slice once and for all.

What is the Reverse Slice Method?

The main focus is helping golfers that slice develops a natural draw that adds distance and is a preferred ball flight.

The system gets to the root cause of why most golfers slice the ball rather than quick fixes that work only short term.

The key is really to implement a sound, proper takeaway and backswing, through the downward movement through the ball.

The Reverse Slice Method teaches many things that are key to removing the slice.

For one, you will eliminate multiple swing thoughts over the ball. In other words, keep it simple!

A player will learn to think more like a pro, unleashing the right side of the brain. The three core parts of the golf slice are exposed. Issues with the set-up, the open clubface, and over the top downward swing path will be fixed.

Finally, the proper method to grip the golf club is taught that eliminates the slice and increases the likelihood of a powerful draw.
The trick to the program is to his 10 draws or hooks in a row. If that isn’t accomplished, start over.

The catchphrase is “15 shots and you will eliminate your slice”. The last five of those shots after the 10 draws is to straighten it out.

Is the Reverse Slice Sequence Any Good?

There have been plenty of reviews from players who have had much success using the system.

One player noted that the Reverse Slice Sequence is very easy to understand and almost instantly straightened his shot path and even developed a small draw.

One player not only was able to eliminate his slice in just one summer but cut a dozen strokes off his score and gained 20 yards off the tee.

He is nearly breaking 80 now and having the most fun he’s ever had playing the game.

Players that have been struggling for years to hit their clubs straight may wonder if this method is for them.

Related Article  What is a Knockdown Shot in Golf? (4 Step Guide)

One man noted that after just a few minutes of instruction with this method, he was able to start hitting straighter, more solid shots, increasing the enjoyment of the game.

Why Am I Slicing the Ball?

There are many reasons a golfer can slice the ball, but the most common is an open clubface.

This causes contact that is not square and you will feel that the club is move across the ball.

Most of the time the cause of an open clubface is a faulty gripp, with too many golfers believe their thumbs should go straight down the grip.

If you keep your underarms close to your body for the duration of your golf swing, the club will likely remain square at the point of contact.

However, if during the backswing or downswing the arms move away from the body, the clubface is more likely to open, causing a slice.

Some players have little trouble keeping their irons inline but have a chronic slice with the driver.

This is often due to poor ball position at address. The ball should be positioned slightly more forward than center.

But be aware of placing the ball too far forward, which can also cause mishits. This is one thing each player must experiment with to find the correct ball position for their swing path.

Posture is also a key part of determining ball flight. If your posture is too upright, more weight is on the back of the heels.

This can cause a very upright swing which generally results in a downswing that creates a slice.

A delayed release of the clubface opens the clubface, causing a slice and this generally happens when the lead arm is too rigid on the downswing.

Does a Strong Grip Fix a Slice?

Many golfers believe a strong grip will fix a slice and have spent countless hours hitting balls with the stronger grip in attempt to correct the problem.

In addition, you will see more knuckles on the bottom hand.

The question is whether or not this grip actually works in fixing a slice. The grip will help to close down the face which MAY decrease the effects of a slice.

However, when the grip is stronger, it can create a cupped wrist on the lower hand at the top of the backswing. This is because the wrist is really cupped a bit from the beginning.

It can also depend on what type of golf club you are using – a strong grip on a driver, for example, may produce more or less consistent results as opposed to a wedge shot.

The cupping of the wrist tends to promote a steeper downswing. In the end, the face of the club opens, making the problem even worse.

Related Article  Golf Classes for Beginners? How to Get Started in 7 Steps!

The key to eliminating the slice is to maintain control of the face through impact, making sure it remains square.

Practical Tips to Correct a Slice

Work on releasing the wrists through impact.

Try feeling your wrists controlling the club flicking them through the hitting zone. Working on this will help develop better swing patterns.

Another common problem with slicers is incorrect weight transfer from the backswing to the downswing.

This means that the downswing is led by the shoulders and arms, oftentimes with the club approaching the ball from outside the line, causing a slice.

A good drill to practice proper weight transfer is to put your leg next to your front foot so it’s touching your thigh.

The proper weight transfer will have your thigh move away from the bag and slightly touching again on the downswing.

Remember that it’s important to have the ball slightly forward when using the driver, but too far forward will make the slice even worse. A general rule of thumb is to place the ball just inside the heel of your front foot.

You can also use alignment aids to make sure your clubface is square at the address.

You don’t want to be lined up with the clubface to the right (right-handed players) or to the left (left-handed players).
Be sure to strengthen a weak grip to at least neutral.

At the address, check to make sure you can see two knuckles on your top hand. This will enable you to release the club better through the impact zone.

Why The Reverse Slice Sequence Method Could Work For You

Nothing takes the fun away from golf more than constant mishits, particularly a slice.

While chunks and topped shots are annoying, at least they are generally still in play.

A hook creates greater distance than a slice and while it may still go out of play, normally it’s a solid ball strike and a more desired flight path.

Rarely does anything good come from a slice. It’s a weakly hit ball that oftentimes puts a player in a disastrous position.

There are numerous methods that golfers have tried to cure a slice, many leading to frustrating results.

One such method that has gotten rave reviews is the Reverse Slice Sequence, which is designed to help develop a natural draw, which is the preferred flight path of top players.

The reasons behind the slice range from a weak grip to poor posture to improper ball position, to cupping the wrists too and inward to outward swing.

Proper ball alignment, weight transfer, neutral grip, and full release of a square club through impact are keys to eliminating the slice.

What are you waiting for?

Try the Reverse Slice Sequence and the other practical tips in this article. You’ll remove your slice and bring back the joy playing the game that you’ve grown to love!