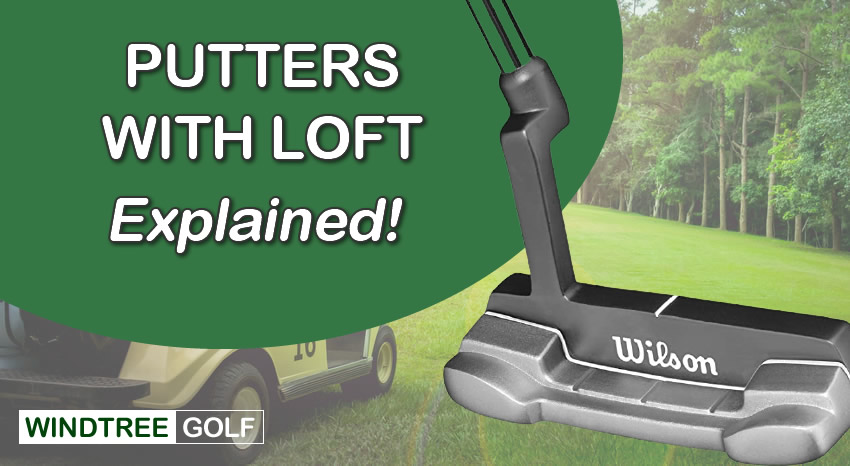 While you might not think it, the putter you carry in your bag comes with a few degrees of loft. And although putter loft isn’t something that recreational golfers spend a great deal of time worrying about, it’s certainly helpful to understand the basics.

So, in this article, we explain the importance of putter loft, how you can adjust the loft and lie of your putter, and also what the legal requirements of putter loft are, according to the USGA.

Let’s begin by looking at the significance of putter with loft is and how it might be affecting the roll of your putts.

What Does Loft Do on a Putter?

Most putters actually have a loft of between 2-4 degrees, which makes it the lowest-lofted club in the bag. If a putter has too much loft, it can cause the ball to go airborne and bounce, which will affect the distance that your putt carries.

Did you know, the putter is traditionally referred to as the flat stick?

Conversely, if your putter doesn’t have any loft at all, it will cause the ball to skip and skid, as your club will press into the putting surface on impact.

Ultimately, having the ideal loft on your putter is just as important as it is with all the other clubs in your bag.

Can You Add Loft to a Putter?

Putter loft is particularly important when it comes to delivering your putts.

For instance, if you execute your putts with a forward press, you would benefit from a slightly loftier putter to compensate for the bounce that is generated from this technique.

Equally, if you typically play your putts from the front of your stance, a putter with less loft would be beneficial, as it is less likely to skip and skid upon impact.

It’s fair to say at this stage that most recreational golfers don’t need to concern themselves with putter loft, as most flat sticks come with a loft of 3 degrees as standard.

Essentially, you don’t need to concern yourself too much with putter loft if you don’t want to!

Given the fact that you need to select an appropriately lofted driver and wedges to add to your bag, thinking too much about putter loft can cause you an unnecessary headache. But if you’re keen to maximize your chances out on the green, we explain how to measure putter loft below.

How to Measure Putter Loft

To measure the putter loft on your club and to ensure the reading is accurate you should use a club lie and loft device. Alternatively, a secondary tool that also can be used is a maths protractor that can measure the angle of a putter clubface.

Related Article  Bloodline Putter Reviews - Legal and (Good to Use?)

The easiest way for beginners, however, is to search for the putter spec on the manufacturer’s website.

In most instances, manufacturers only indicate putter length on their clubs, as opposed to the loft, so you will need to look specifically if you want to find out the degree of the loft of your flat stick.

Alternatively, you can take your putter to your local custom fitting center and ask the staff to measure your putter and evaluate your putting stroke.

This is the best way to ensure your putter loft is appropriate for your putting stroke.

If you want to measure the loft of your putter yourself (DIY), you can follow these 4 simple DIY steps:

Just be mindful that measuring and adjusting the loft of your putter means you need to invest in the equipment to get the job done, which will be more expensive upfront than taking your putter to a fitter.

What Loft Should a Putter Be?

Most putters have a loft of between 2 and 4 degrees, making them the lowest-lofted club in the golf bag. According to the USGA, A putter’s loft should not exceed ten degrees. So, providing your putter has a loft of 10 degrees or less, you can use it without issue.

But as we’ve touched upon already, different players will benefit from using putters with slightly different lofts.

The best way to articulate this is to introduce the example of Phil Mickelson, who has adjusted the loft of his putter throughout his career to match his unique putting stroke.

Mickelson has used putters with a loft of seven degrees while playing on tour, which is the same loft as some drivers!

The reason for this is that Mickelson executes a significant forward press when he putts, which sees him lean his hands forward towards the hole.

When putting, a forward press decreases the effective loft on the putter (as the face is pointed towards the turf), which can cause the ball to skip or spin when it heads towards the hole.

As such, Mickelson’s solution to this has been to adjust the loft on his putter, which compensates for his setup.

The point here is that there’s no right or wrong putter loft, and the optimal loft depends upon your setup.

For most recreational golfers, a standard putter with a loft of 2-4 degrees should be more than sufficient to get you started.

Yes, lofted putters are legal up to ten degrees. When you think about it, every putter is lofted. But if you’re customizing your putter, you need to ensure it adheres to the USGA guidance and strict rules on loft limitations.

By definition, the loft of a putter must not be greater than 10 degrees. Putters are permitted to have a negative loft. However, a negative loft exceeding a magnitude of 15 degrees would not be considered traditional and customary in form and make.

So, while you can adjust the loft of your putter, it’s important to bear these guidelines in mind.

If you’re adjusting the static loft of a putter, we would advise you to hire a club-fitter to make the amendments on your behalf so that your putter remains legal after it has been worked on.

What is Putter Lie?

Putter lie is the angle that is formed by the sole of the head when it is placed in a neutral position when you’re addressing the ball. The lie angle of most putters is typically between 70 and 72 degrees, which is considered the manufacturer’s standard.

When you ask a club-fitter to adjust the loft or length of your putter, they will also change the lie angle by bending the shaft or hosel.

This ensures that your putter is soled correctly and will be accurately aligned.

Ensuring your putter lie is correct is important, as it is fundamental to distance control and accuracy.

For every degree your putter lie is out, your putt can veer as much as four yards off target, which, needless to say, is something that you will hope to avoid out on the green!

If you want to adjust the lie or loft of your putter, you will need to visit a club fitting specialist, as getting your measurements wrong will have a disastrous effect on your overall putting game.

Should I De-Loft a Putter?

Ultimately, the decision of whether to de-loft your putter is a personal one. As the Mickelson example shows, altering the loft of your putter should go hand in hand with considering your setup.

But this being said, most recreational golfers don’t need to worry too much about putter loft, as we’ve already mentioned.

Rather than de-lofting your putter, if you’re not having much luck out on the greens with your current flat stick, visit your local club fitter and look for an alternative club.

There are various putter shafts that you can try, and you will find that customizing your putter (or buying a new club altogether) will have the desired results on your scores.

De-lofting your putter is somewhat complex and is something that you should only look at doing if you really have to, or if you’re competing at the highest level of the game.

Putters with Loft: The Facts!

The putter is the lowest lofted of all clubs in your bag.

But in spite of what you might think, most putters out there have a loft of between 2 and 4 degrees, and they can go up to 10 degrees and still be legal as per the guidance issued by the USGA and R&A.

While you can adjust the loft of your putter, doing so isn’t necessarily worthwhile, particularly for recreational golfers.

The bottom line is, in regards to putters with loft that if you’re struggling to make putts out on the green, we’d advise you to head for a fitting to get your club adjusted by a pro.