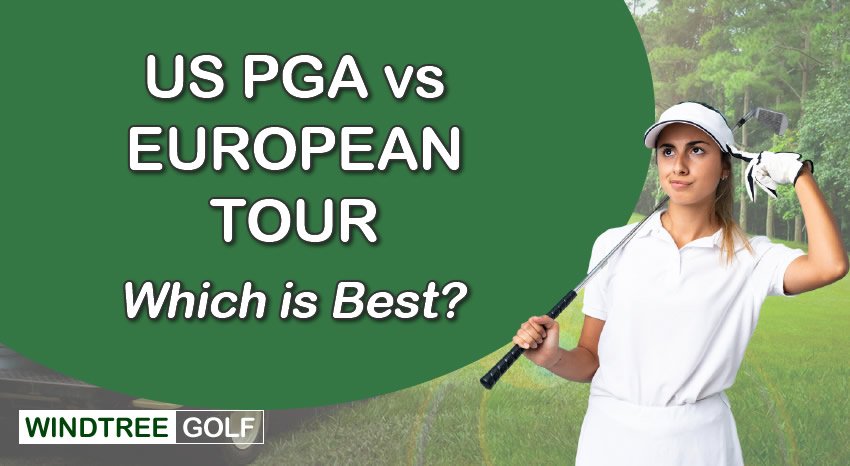 Although there are lots of golf tours around the world, the PGA and European Tours are undoubtedly the most popular. They’re also the most difficult to compete in and attract the biggest names in the sport.

However, there are notable differences between the PGA and European Tours, and they’re certainly not equal in terms of their makeup and appeal.

In this PGA Tour vs European Tour article, we compare both Tours and explain why the PGA Tour has long been regarded as the better of the two.

Difference Between the PGA and European Tour

Both Tours have different competitions, players, courses, and purses, and the qualification process for each is different. They’re two of the most prestigious Tours in world golf, and players from all around the world aspire to win their tour cards to play on each.

The likes of Rory McIlroy and Matt Fitzpatrick have made the transition from Europe to America and exemplify this trend.

Another thing to note is that the purses on the PGA Tour tend to be bigger than on the European Tour, which is another motivation for players to play in America. Below, we compare both Tours and help you understand the differences between the two.

Is the PGA Tour harder than the European Tour?

The PGA Tour is harder to qualify for than the European Tour, and it is certainly more prestigious. This is primarily because there is more money on offer on the PGA Tour, and the crowds are much bigger in America than in Europe.

Golfers may also like:  Golf Digest vs Golf Magazine: Which Is Better for Me?

In the past, players have switched between both Tours, but it’s telling that some of the biggest names in world golf have more wins in Europe than they do on the PGA. For instance, Ian Poulter has won 12 times in Europe and only twice on the PGA.

Lee Westwood has won 23 times on the European Tour but only has 2 PGA victories to his name. Paul Casey is another one who fits this mold, with 13 European Tour wins and 2 PGA Tour victories. There’s no doubt that it’s harder to win on the PGA Tour.

This is primarily because the conditions are tougher, and the field is much stronger. It’s exceedingly difficult to win a PGA Tour card, and the Tour is very much for the finest golfers in the world.

Can European Tour Players Play on the PGA Tour?

Yes, historically, European Tour players have been able to play on the PGA Tour. Some golfers play most of their competitions on the European Tour but head over to America for certain events like the PGA Championship, which is the fourth major.

This is ideal for European-based players who don’t want to live in the United States, as it enables them to base themselves in Europe for most of the season before heading off to the US to play at events that they qualify for or are invited to.

As mentioned, it’s extremely difficult to qualify for PGA Tour events, so it’s often only the most decorated players on the European Tour that have this luxury.

But at present, the rules do permit European Tour players to participate in certain PGA Tour events, which is something that we have seen regularly in the past.

Can PGA Tour Players Play on the European Tour?

Golfers may also like:  Adams Golf: What Happened (and Still in Business?)

This is because players with a high profile will automatically draw more attention to the event in question, which is beneficial to the sponsors.

For instance, Tiger Woods could play at any European Tour event that he liked, as he would pull such huge crowds to the tournament.

He would be immediately invited by the sponsors to play, which is often how PGA Tour players secure a spot at the European tournaments they want to feature in.

Which Golf Tour Has the Higher Purse?

The PGA Tour has a higher purse than the European Tour. Presently, the average tournament purse for PGA tournaments is $9.1 million, while the flagship Players Championship now has a purse of $20 million.

In comparison, European Tour purses range from $1.15 million to $12 million, highlighting that the Tour is way behind in terms of the prize money on offer. While lots of golfers base their decision about which Tour to play on geography, others are undoubtedly motivated by money.

For the seven regular-season events currently on the LIV calendar, each comes with a guaranteed purse of $25 million, with the winner of each tournament set to walk away with a cool $4 million.

It is already promising to completely revolutionize elite golf as we know it, and it soon could be the biggest and most popular golf tour in the world.

Which Golf Tour is Regarded as Better?

This is because the purses are higher, there’s more exposure, and the chance of securing lucrative sponsorship deals is better. In other words, PGA Tour players can significantly further their careers by playing on the PGA Tour.

However, many golf purists argue that the European Tour is more interesting. This is because tournaments are played at a huge variety of courses, with links, parkland, and various other course types considered.

Golfers may also like:  Golf Leagues Near Me? (How to Start Your Own!)

The European Tour also plays in different parts of the world, from Dubai to Thailand. The PGA Tour is predominantly (if not exclusively) in America, which is why some people prefer the lifestyle associated with playing golf on the European Tour.

Which Golf Tournament Pays the Most?

Excluding the newly established LIV Golf events, the biggest purse in world golf is the Tour Championship. This comes to an end after the FedExCup Playoffs and has a purse of $75,000,000. The winner walks away with $18,000,000.

As for specific tournaments, the Players Championship on the PGA Tour has the biggest purse, with $20,000,000 paid out in prizes.

The winner’s share is $3,600,000. While the Players’ is regarded as the least important major from an achievement perspective, it’s actually the best paying major, which is why it has remained so popular over the years.

In spite of the monetary differences between the two, most players would bite your hand off for a green jacket rather than the Players Championship.

Ultimately, the events on the PGA Tour have higher purses than those on the European Tour.

But as we’re about to find out, these figures are insignificant when compared to the financial pull of the Saudi-backed tournaments that are arranged on the LIV Tour, which is likely to shift the future landscape of professional golf.

While purists will say that golf isn’t about the money, others argue that it is. After all, money talks in all walks of life, and the opportunity to further your career and enrich your family is something that few of us would turn down.

That’s why in our PGA Tour vs European Tour comparison, the PGA Tour is widely regarded as better than the European Tour, and the purses on offer in America far outweigh those that are common in Europe.

But as the Saudis continue making headlines and launching new events, we could be on the cusp of a seismic shift at the top of the sport, and we will soon learn how easily the best golfers in the world are swayed by huge purses.