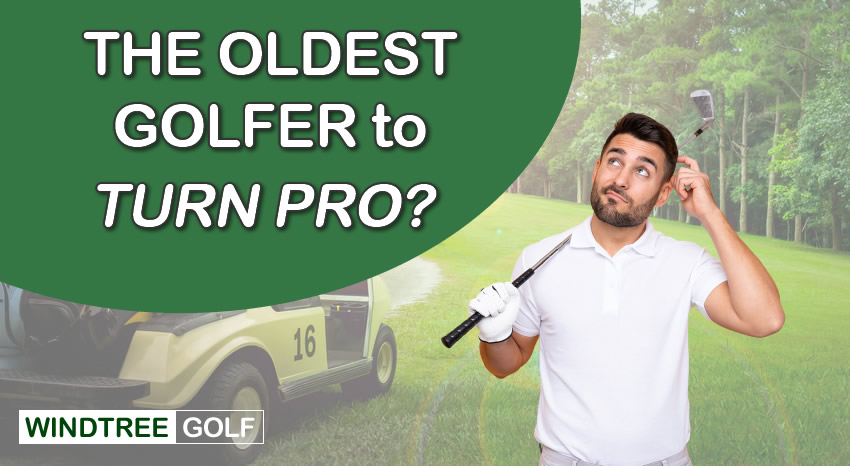 Golf is a unique sport in the sense that players of all generations can enjoy it. It’s more than possible to tee off alongside your son and father, enjoying a game that truly spans the generations! But pro golf is a little different.

The vast majority of golfers turn pro in their late twenties and early thirties, but the oldest golfer ever to turn pro did so at the age of 47! We introduce him in the following section.

As well as looking at inspiring pros who have used their experience to win big on the PGA Tour in the twilight of their careers, this article looks at various questions relating to getting into pro golf later in life.

But let’s begin by learning about the impressive career of the oldest player to turn pro in the history of the PGA Tour.

Who is the Oldest Golfer to Turn Professional?

The oldest golfer to turn professional is Allen Doyle, who was 47 years and five months old when he completed his rookie season on the PGA Tour in 1996.

However, special mention also has to go to Jim Rutledge, who was precisely one month younger than Doyle when he debuted on the PGA Tour in 2007.

In his first full season on the Nike Tour, Doyle won three times.

After that, he went on to play in 58 PGA Tour events, making the cut 31 times and carding two top-ten finishes.

But it was on the Champions Tour that Allen Doyle really made a name for himself.

His third senior major came in 2005 when he beat Tom Watson to the title of the US Senior Open after a stunning comeback.

You can watch Allen Doyle in action here:

By the time of his retirement, Doyle had earned more than $13million from the Champions Tour, showing that despite his age, it’s never too late to make a name (and a dollar) for yourself in golf!

Can You Become a Pro Golfer at Any Age?

There are no age restrictions associated with turning pro, meaning you can theoretically become a pro at any age. Most players turn pro in their late twenties and go on to enjoy success as they mature into their thirties.

The average age of a PGA Tour pro golfer is approximately 35, but it’s not uncommon for players to win major tournaments in their forties (think of Tiger Woods at Augusta in 2019, for instance).

Like in most sports, age becomes an issue in golf when your fitness levels influence your ability to compete.

In that regard, younger players have the advantage as they have the stamina to play competitively for more extended periods of time.

Also, professional golf takes its toll on your body!

There’s only so much your knees, back, and hips can take before they begin to struggle.

Related Article  Why is Golf a Sport? (Real Question Answered!)

The older you are, the more difficult it is to compete with younger players.

Yes, you can turn pro at 40 years of age. As Allen Doyle and Jim Rutledge proved, you absolutely can turn pro in your forties. But, unfortunately, it’s just not that common.

That being said, some golfers thrive in their forties and use their experience to their advantage out on the course.

The likes of Lee Trevino, Jerry Barber, Raymond Floyd, and the great Jack Nicklaus all won majors in their mid-forties, showing that there are exceptions to the rule that 40 marks the time that your golf career starts going downhill.

But of course, all these guys were established pros before winning these majors.

In reality, you probably need to be performing at an exceptional standard throughout your twenties, winning amateur championships and showing that you’re capable of playing elite golf.

As you head into your thirties, you can then look to make the transition onto the PGA Tour.

However, for the vast majority of golfers, 40 might be a little too late in life to look at turning pro.

Yes – there’s technically nothing stopping you from turning pro at 50. But bear in mind that nobody in the PGA Tour’s history has ever turned pro during their fifties, so it’s a tough ask!

But it probably didn’t escape your attention that the evergreen Phil Mickelson won the 2021 PGA Championship at the ripe age of 50 years and eleven months, making him the first male golfer to win a major in his fifties.

However, if you’re approaching 50 and harbor ambitions of turning pro, all hope is not lost!

You could always look to join the Champions Tour, which is specifically for golfers over the age of fifty.

In the twenty years that followed Sigel’s entry onto the Champions Tour, he won eight events and pocketed $9million in prize money.

Sigel is another example of a golfer who entered the pro game later in life and made a name for himself, so never give up hope if you think you have what it takes to qualify for the Champions Tour, no matter how old you are!

Can You Become a Pro Golfer Without College?

Yes, you can become a pro golfer without attending college. While most golfers start playing at a young age and progress with their golf education through high school and college, there’s nothing stopping you from taking a less conventional route to the top.

Three-time major champion Larry Nelson didn’t swing a club in anger until he was 21. Y.E. Yang first hit a golf ball when he was 19 and became a major champion in his mid-thirties.

These guys show us that if you have the skill and dedication, there’s no reason you can’t make it as a pro.

The reason why lots of kids play golf at college is to perfect their skills and to be exposed to national tournaments.

Related Article  How to Play the Golf Card Game (and Win!)

But you can also make a name for yourself on the amateur circuit by winning high-profile events and then qualifying for the Tour through the qualifiers.

The bottom line is that it doesn’t matter which route you take to the PGA Tour; as long as you qualify and stay there, you’re just as deserving as any other player that makes the grade.

The Pro Golfers Who Started Playing Late in Life

Still, many other pro golfers started playing later in life or at least took a while to bloom into notable tour players.

Vijay Singh is an excellent example of a golfer who didn’t blossom until later in his career.

Although he showed glimpses of his talent in his twenties and early thirties, he won his first major at the age of 35.

But his standout season was in 2004 when he was 41 years young. He won nine events, including the PGA Championship, and was named PGA Golfer of the Year.

US Ryder Cup captain Steve Stricker is another late bloomer.

At the age of 40, Stricker won the 2007 PGA Tour Comeback Player of the Year Award for the second season running.

As well as winning the FedEx Cup’s first event, Stricker climbed to the second spot in the world rankings in the same year.

Not bad for a guy who was planning to slow things down.

The key takeaway here is that age is very much just a number!

While most golfers enjoy the pinnacle of their careers in their thirties, there are lots of exceptions to the rule, and it’s never too late to pick up a golf club and perfect your game.

How Many 50 Year Olds Have Won a Major?

There is one player in their 50s who has ever won a Major. Phil Mickelson is the only fifty-year-old ever to have won a major, doing so at the 2021 PGA Championship. Lefty’s achievement was stunning, and it made him the oldest major winner ever.

We certainly haven’t seen the last of him, that’s for sure.

Majors aside, the oldest ever winner on the PGA Tour is Sam Snead, who won the 1965 Greater Greensboro Open at the age of 52 years and ten months.

As well as Mickelson and Snead, other players to have won on the PGA Tour over the age of fifty include Craig Stadler, Fred Funk, John Barnum, James Burn, Davis Love III, and Art Wall.

Golf is a sport that players of all ages can enjoy. Some players pick up their first club as toddlers and play the game into their eighties and nineties!

But as for turning pro, most players look to get their PGA Tour card as they’re turning thirty, after making a name for themselves at college and on the amateur circuit.

But as the likes of Allen Doyle and Jim Rutledge show us, as well as stunning late-career major wins from Phil Mickelson, Lee Trevino, and Vijay Singh, it’s never too late to make a name for yourself at the pinnacle of golf.