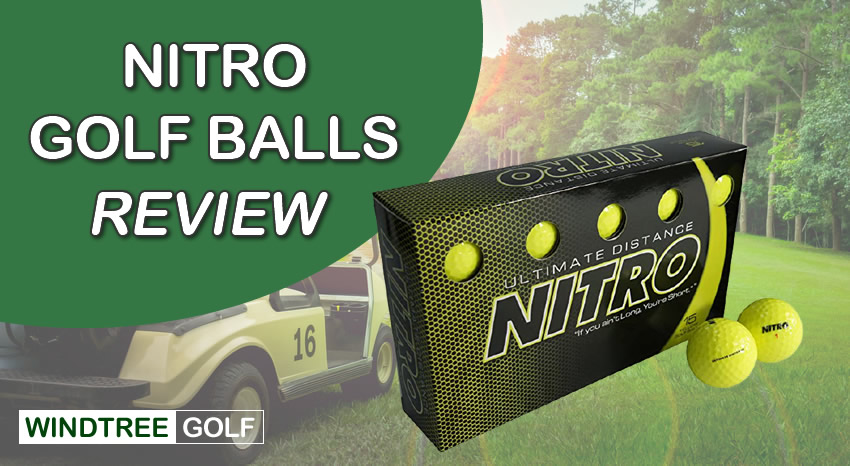 Although not widely known and played, Nitro golf balls have developed a reputation in recent years for being cheap, cheerful, and rock hard! But are they legal?

Remember, all Nitro golf balls can be played in recreational games and on the practice ground, while the only two that are USGA approved are the Maximum Distance and Long Distance Peak Performance balls, each of which we introduce below.

To help you decide if Nitro balls are suitable for you, we look at some of the company’s most popular products and run through the pros and cons of each. 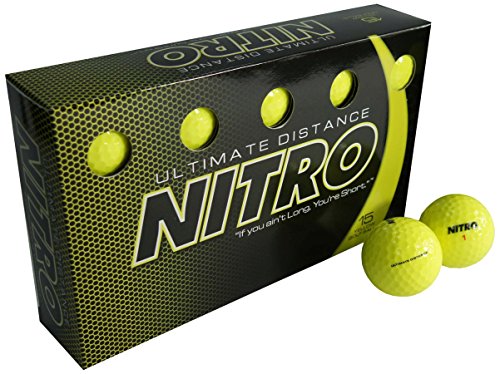 When a golf ball is described by a manufacturer as ‘virtually indestructible,’ it makes you sit up and take notice.

And that’s the first thing that Nitro claims about its Ultimate Distance Golf Ball, which comes in various exotic colors including orange, yellow, and pink (you can go for white if you’re a traditionalist).

Nitro Ultimate Distance balls comprise a reactive two-piece titanium core, which essentially maximizes the energy transfer from the clubhead to the ball.

In theory, it should fly further, particularly when leathered with the big stick!

The balls have also been designed with symmetrical dimples, which Nitro claims reduce drag and also contribute to longer shots.

As the name of the ball suggests, if you strike it cleanly off the tee, you can expect it to fly! Let’s look at some of the pros and cons of Nitro Ultimate Distance balls. 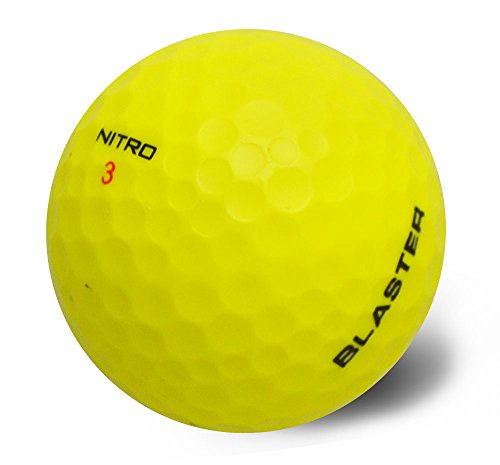 We would suggest that Nitro Ultimate Distance balls are suited to beginners who often end up in deep rough or in the trees, as these balls are much easier to locate than others!
Golfers may also like:  Snell Golf Balls Review - MTB Black, X and Get Sum Rated!

The fact that they increase distance is good for those just starting out, too. 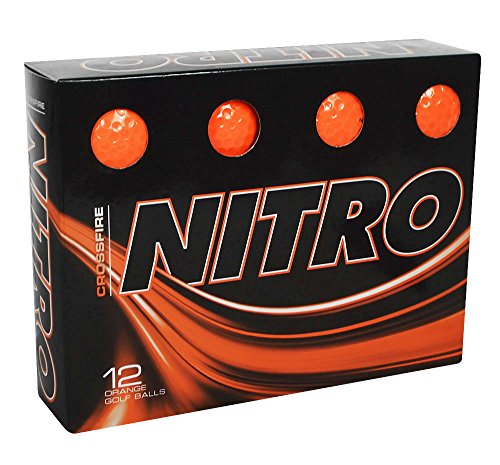 If you’re not sold on Nitro’s Ultra Distance offering, the Crossfire balls are a good alternative to consider.

While they still focus on maximizing energy transfer from club to ball (and therefore going further), Crossfire balls are built to last.

They are coated in a DuPont lithium Surlyn cut-proof cover, which reduces the wear and tear on the balls, and keeps them looking new for longer.

Compared to Ultimate Distance balls, the Crossfire has a softer feel but is still much harder than some of the most commonly played balls in the game.

Let’s look at some advantages and disadvantages of playing Nitro Crossfire balls. 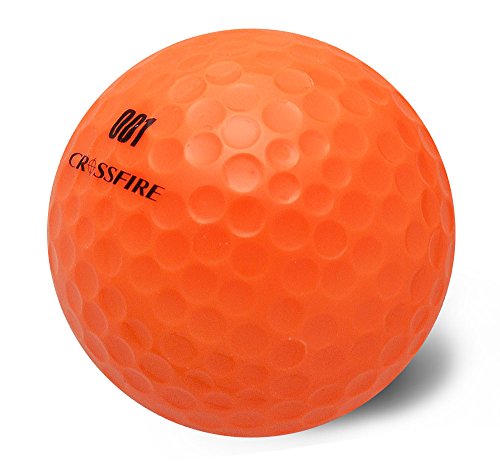 That being said, more experienced players might consider investing in them to use out on the practice ground.

After all, they represent great value for money and may help you hit your woods and metals further. 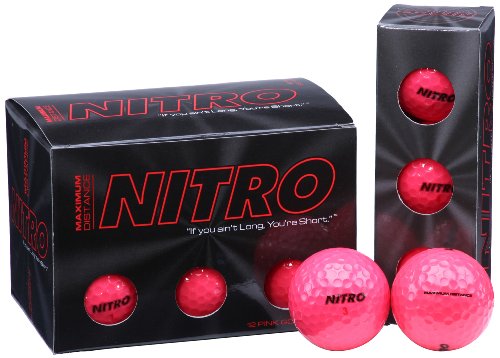 If you thought Nitro’s Ultra Distance balls increased your length off the tee, you should probably try their Maximum Distance golf ball.

The good news about the Maximum Distance ball is that it is developed to USGA specs, which makes it competition legal.

Coming with all of the same design features previously introduced, the Maximum Distance ball from Nitro has been produced with all levels of golfers in mind (from beginners to pros).

Whether pros would opt to play such a hard ball is another topic entirely, but that’s the claim of Nitro.

But what are the Maximum Distance balls actually like? Let’s find out with an assessment of the pros and cons. 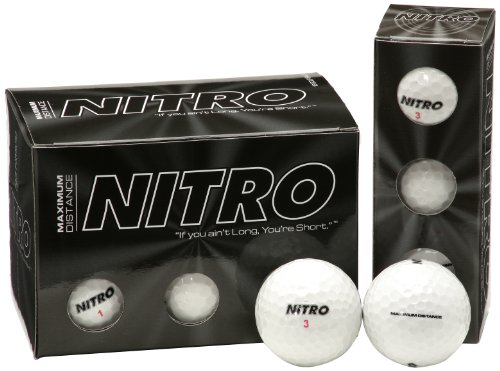 Like the other Nitro balls we’ve introduced, the Maximum Distance balls would be ideal for beginners or anyone looking to stock up their practice bag without wanting to pay over the odds for new balls.

The fact that they are competition legal makes them a good choice for beginners who are considering getting involved in club competitions for the first time. 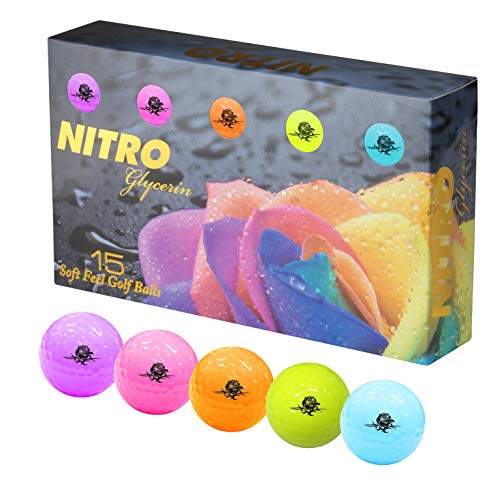 The best thing about Nitro Glycerin balls is the neon color scheme! Your fifteen pack contains a range of vibrant colors, including pink, purple, orange, yellow, and blue.

If nothing else, they will be a great conversation starter with your playing partner on the first tee.

They are also semi-translucent, which makes them easier to spot out on the course.

When compared to the other Nitro balls already introduced, the Glycerin ball is much softer and is capable of spinning.

So, how do they actually shape up? Let’s look at what’s good and bad about Nitro Glycerin balls.

Technically, lower handicap players might get good use out of Nitro Glycerin balls, as they offer a little more control than the distance balls introduced above.

But ultimately, these balls are perfect for anyone looking to jazz things up out on the course, as the colors are the best thing about them. Why not give them a go? 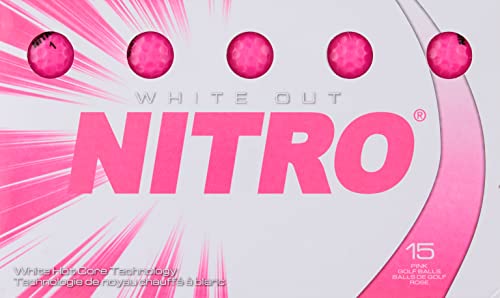 Another Nitro ball that’s USGA approved, the Long Distance Peak Performance balls are perhaps the best within the Nitro range.

In typical Nitro fashion, the balls are only available in pink, meaning you will have absolutely no problem finding them in bad light.

In spite of being ‘long distance’, these balls come with a soft feel and 70 compression, which makes spinning them possible for those capable.

Given the other Nitro balls available, we would recommend these out of all of them to lower and mid handicappers if you’re keen to try out Nitro balls.

Let’s finish up with a review of the good and bad of Nitro’s best-performing ball.

Golfers may also like:  Do Golf Balls Go Bad? - The Signs to Look For! 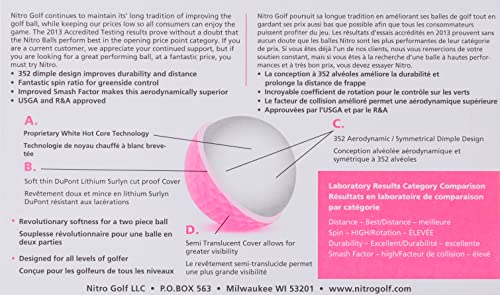 The fact that they’re USGA and R&A legal means you can add them to your bag for tournaments, too.

FAQs – What You Need to Know About Nitro Golf Balls

Check out our common questions concerning the nitro golf ball below:

Are Nitro Golf Balls Any Good?

When compared to the likes of Titleist Pro V1s, Nitro golf balls fall a little bit short in terms of performance but represent good value for money for golfers who are just starting out.

Considering they’re so cheap and designed with beginners in mind, they’re a decent option to add to your bag, particularly if you’re looking for more distance off the tee.

Just don’t expect a great deal of control when it comes to your approach play.

Are all Nitro Golf Balls Illegal?

No, not all Nitro golf balls are illegal. As introduced, the Maximum Distance and Long Distance Peak Performance balls are USGA & R&A approved, meaning you can play them in tournaments.

The other balls introduced can be played recreationally and are ideal for practice rounds.

Beginners and high handicappers might see an increase in their distance thanks to the way the dimples are designed on Nitro balls. However, some low to mid handicappers complain that they lose distance when playing Nitro.

Aside from the price, the main reason to buy Nitro balls is that they promise a greater distance off the tee.

We recommend you grab a dozen and hit some drives off the practice range first.

Nitro golf balls are unapologetically unique. From the brazen colors to the rock-solid core and tailored dimple design, you can expect these babies to fly!

They’re certainly not an attractive option for golfing purists, and they’re nigh on impossible to spin.