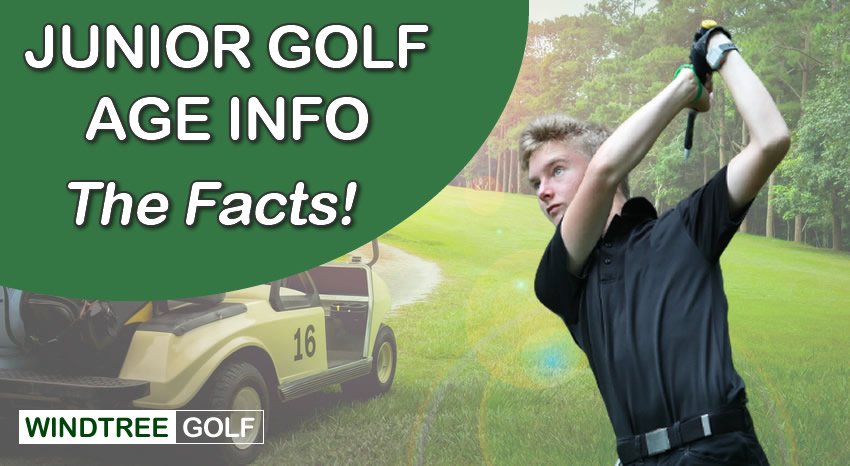 The world of competitive golf starts at a young age and there are many organizations that help manage and promote junior golf.

Competitive play can start as young as six years old although the officially recognized title of ‘junior golfer’ is not assigned until the player is twelve years old.

The game of golf is a great way to teach young players values in life like hard work, integrity and how to handle winning or losing.

Organizations like the AJGA, Texas Legends Junior Tour, U.S. Kids Golf and First Tee can set junior golfers on the path to earning scholarships with golf programs in private high schools as well as at the university level.

What Age Is Considered a Junior Golfer?

A junior golfer, according to the AJGA, is at least twelve years old and no older than nineteen years old. The AJGA is the American Junior Golf Association and oversees sanctioned tournaments that act as a path to junior qualifiers.

The upper end of the age bracket has some caveats such as the golfer must not have graduated high school.

There are additional requirements for the different two AJGA event classifications 12-15 and 12-19.

The overriding rule pertains to college and eligibility. A player cannot participate in any AJGA events after they enroll in college.

How Do You Become a Junior Golfer?

You become a junior golfer by becoming a member of a sanctioned golf organization. There are many options but the AJGA is the largest and most popular choice for future junior golfers.

The process is similar throughout the different organizations and starts with membership.

Most of the organizations require registration fees for membership but there are more economical options as well.

Rankings differ between the different organizations and place you on leaderboards with other junior golfers that compare entries, performance, and placings.

A junior golfer’s ranking is created by playing in sanctioned non-organization events, pre-qualifiers, and qualifier tournaments.

There are thresholds in place that help determine who makes placings or not. As a general rule, you can assume that the top fifty percent of finishers will receive credit.

The USGA also defines their definition of a Junior Amateur golfer as a player that is under the age of 19 (the age used to be 18).

One major difference between USGA sanctioned tournaments and AJGA tournaments is prizes and winnings.

AJGA tournament players are not allowed to earn money from their wins, however, USGA junior golfers are.

USGA Junior Amateurs are limited to a $750 purse per event.

How Often Should Junior Golfers Practice?

Junior golfers should practice at least three days per week. The amount of practice a junior golfer should commit to depends on if they have regular formal coaching, if they attend group lessons or if they have private lessons.

Most junior golfers have formal instruction with their golf team that is led by a coach or team of coaches.

These practices are normally structured and focus on specific parts of the game each day.

Coaching styles vary between teams however it is not uncommon for an actual round of golf to be avoided.

It is encouraged to get out on the golf course and play in between these types of practices.

The junior golfer is able to work on lessons learned from team practices and implement changes to their swing and strategy in a low-pressure scenario.

Your best option is to listen to the junior golfer’s coach’s suggestions – they typically encourage junior golfers to play outside of practice.

The finer points of the game, like chipping and putting, can and should be practiced as often as the junior golfer wants.

Chipping and putting practice is the best way to reduce strokes while playing.

How Many Golf Tournaments Should a Junior Play?

A junior golfer should play in twelve to fifteen tournaments per year to remain competitive on the junior and amateur circuits. This number can rise pretty dramatically, however, when you take into account that most junior golfers play on some kind of high school team or a ‘travel’ team.

High school golf seasons generally run from the beginning of August to the end of October.

This changes depending on the climate of the state and how their seasons complement golf courses.

A high school team junior golfer can expect to play in at least 12 rounds of competitive golf.

Golfers may also like:  Flat vs. Upright Lie Angle Explained!

One major distinction between high school matches and AJGA tournaments is the number of holes played.

Climate is the biggest role in how many golf tournaments a junior golfer will play in.

There are sanctioned tournaments every weekend in parts of the country where the climate allows. Warmer states like Arizona, New Mexico, Texas, and Florida host large junior golf tournaments during the winter.

Weather limits the number of tournaments that a junior golfer can play in if they live far away from warmer climates.

What is the Average Score for a Junior Golfer?

The average score in a round of eighteen holes for a junior golfer is approximately 85. That score depends on a number of factors like course rating, player’s years of experience, and level of competition.

The AJGA requires an average score of fewer than one hundred strokes to play in its high-level sanctioned tournaments.

They track overall progress and rankings using their Junior Golf Scoreboard, which is similar to a professional leaderboard like the FedEx Cup, and it is updated on a weekly basis.

It is a fair assumption that the most high-level players, even at the junior golfer level, shoot scores that are well below par.

The AJGA tracks rankings on a separate website called the Junior Golf Scoreboard.

They monitor all kinds of statistics but the main leaderboard includes

The rankings can be filtered by gender, state, region, country, or graduating class year.

How Do Junior Golfers Get Ranked?

A junior golfer’s ranking is decided by playing in sanctioned non-organization events, pre-qualifiers, and qualifier tournaments. There are thresholds in place to determine who makes placings or not. As a general rule, you can assume that the top fifty percent of finishers will receive credit.

For the biggest junior golf organizations, you must play in at least four events per year to retain the ability to be ranked.

The “Junior Golf Scoreboard” system is based on a player’s 36-hole records that have been entered over the previous year.

Rankings are important in junior golf due to their impact on being included in invitational tournaments, placement on global tournament teams like the Wyndham Cup and the Junior Presidents Cup team.

Golfers may also like:  Golf Classes for Beginners? How to Get Started in 7 Steps!

Various junior golf organizations have their own “All American” rankings and the AJGA refers to the leaderboards while choosing their Junior All-Star team.

Junior golfers earn points playing in tournaments that add up to their total score and ranking.

Different tournaments are worth more or fewer points depending on their notoriety and difficulty.

A tournament where most players score extremely well will provide more points than when an average field turns in their scores.

How Good Do You Have to Be to Play AJGA?

Your average score needs to be under one hundred strokes to play in most AJGA tournaments. Junior golfers that expect to play at the highest level and compete to win tournaments must shoot below par consistently, between 5-11 strokes under par on average.

A player can begin participating in AJGA events when they turn twelve years old and the organization has provided guidance on how to determine if the junior golfer “has what it takes” to compete at a high level.

The most recent yardage and scoring averages show the results from the year 2020 and indicate that you need to turn in very good scores to perform at the highest level of junior golf.

AJGA invitational events, such as 2021 The PING Invitational in Stillwater Oklahoma, are well over 7,000 yards.

Invitational events are reserved for players high on the leaderboard.

The PING Invitational only invites the top 34 boys and top 34 girls to their event.

They base their decision on the Rolex AJGA Rankings.

The first few years playing AJGA are spent gaining spots on the leaderboard and earning ‘Stars’ that are used later in the junior golfer’s career to enter tournaments.

There are many resources available to help a junior golfer play competitively ranging from high school teams that provide coaching to highly structured tournament play.

Although by definition a ‘junior golfer’ is a player that is between twelve and nineteen years old, junior golfers can enjoy and start playing the game before then.

Sanctioned organizations help bring notoriety to a junior golfer’s name and help them earn entry into private high schools and even gain scholarships to athletic programs at the collegiate level.