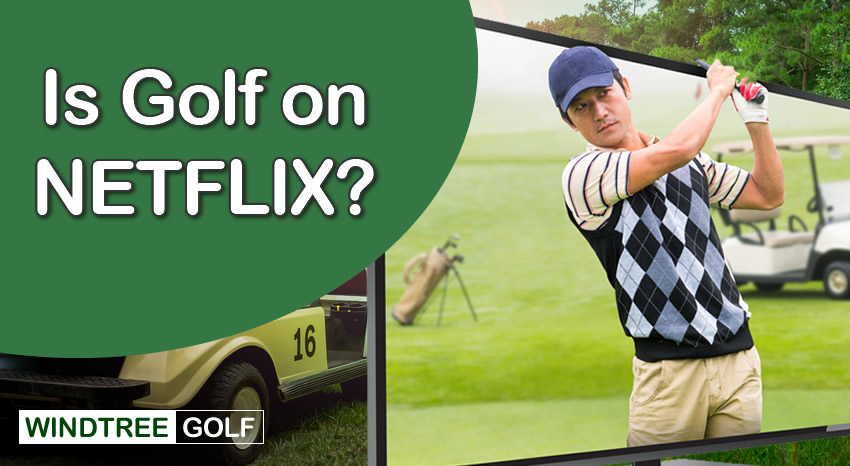 The love for Golf is aligned with other sports such as football and basketball with a huge fan base. But are the main PGA Tour events accessible on Netflix?

Unfortunately, live golf is not available to watch on Netflix. But still, you can use this streaming platform to watch golf movies and online documentaries that are inspirational and focus on golf.

Can I Watch Live Golf on Netflix?

Is the Golf Channel on Netflix?

No, the Golf Channel is not available on Netflix. Therefore, you cannot access any of these premium golfing channels’ content on any device.

What Golf Movies are on Netflix?

There are no live Golf tournaments or any other sports on Netflix channels. But we’re hoping it’s only for now. However, that doesn’t mean that this platform is a sport-free zone.

There are golf movies you can sit down on your couch and watch. Some are comic, while others portray real-life experiences on a golf course. So, let’s have a look at these movies.

This is a classic movie with charm and comedy.

So, if you want a golf movie with great content and comedy to make you laugh, Happy Gilmore will do.

It’s a movie from the 90s but with a great golf influence and timeless humor.

It’s about Adam Sandler, a character in the film who is a failure in ice hockey.

But even so, he discovers that his powerful shots in ice hockey are equivalent to remarkable hits on golf.

With his grandma about to lose her house, can he play well and earn enough money to save it?

Related Article  How Long Does Topgolf Take to Play? - All The Facts!

Watch the movie and let us know!

The dream of all amateurs is the scene in the Tin Cup golf movie.

Also a classic film, it has the push to get you off your couch, onto the course for a nice round of 18 holes with your buddies.

If you are looking for an authentic golf film that gives a true reflection of this game, Tin Cup is highly recommended.

It shows how inner demons and bull-headedness can cost you in life!

At the same time, it’s inspiring when Roy goes back for one last try in the golf championship – but no more spoilers, go and watch it on Netflix!

If you are a golf amateur or golf enthusiast searching for motivation, this movie has it all and is very inspiring to people who don’t even like golf.

A biopic film, Bobby Jones, Stroke of Genius is another classic golf movie you should add to your smartphone, tablet, or smart TV playlist.

It’s about a golfer with blessed hands.

In a single season, he bagged 4-main golf championships!

Many say he’s one of the best golfers of all time.

And that means even Tiger Woods doesn’t come any close (for some older folks!).

Bobby’s triumph was in 1930 after the four major wins.

He went home with US open, US amateur, British Amateur, and Open in the same season.

“If this doesn’t motivate you, nothing will” Tee Shot is another biopsy, but this time on a more current golf champion, Ariya Jutanugarn from Thailand.

The movie cuts across from her childhood to the current great champion she is.

There are hard times in her life when growing up that later paid off when she scooped a golf title.

While many viewers have different thoughts behind the movie’s morals, it’s an inspirational one.

And of course, there are cheesy scenes in the film but they are there to stir up the movie.

So, if you want to watch a journey to LPGA tour, then grab this opportunity and get it streamed today!

Watch The Greatest Game Ever Played Movie on Netflix

Through the touching scenes in The Greatest Game Ever Played, you can explore the life of Francis Ouimet.

Related Article  What is a Golf Scramble? - Everything You Need to Know!

However, it was almost a decade later after his death that he was inducted…

So, this film is dedicated to him and his success in the US opens and definitely a movie that all golf fans should watch.

Watch The Caddy Movie on Netflix

A 1953 classic film is about Harvey Miller.

He is a gifted golfer who is shy and a son to a popular golf pro.

Instead of getting onto the course and playing himself, he chooses to be a caddy to his friend.

And it’s through being a golf coach and great caddy that he becomes a prosperous golf instructor.

Are there any Golf Documentaries on Netflix?

How were those golf movies?

If you want more shows on Golf, Netflix has an amazing golf documentary to watch that we recommend you watch

When you talk about the brilliant collection of Netflix documentaries, The Short Game is one of the best.

It’s a lengthy documentary about kid golfers and proves to be a real eye-opener.

It showcases the effort the kid golfers and their parents are willing to put in to be part of the World Junior Golf Championship.

In the documentary trailer, you will see a young boy struggling to pull a heavy tire along the street as a workout preparation for the golf competition.

It’s a sad scene that will break your heart.

But the determination and consistency of these kids in their practice are also inspirational and show what you need to do to become a professional player on the US PGA Tour.

Is Netflix Good for Watching Golf?

Although there is no Golf Channel or live PGA tournaments such as the Majors on Netflix the story doesn’t end there for golf fans.

There is some very good golf content that can be enjoyed by the whole family.

To ensure the viewers who love golf are entertained, the platform offers golf movies and golf documentaries.

With these streaming options, golfers have something to keep them busy and entertained for when they are not on the course.

They are inspirational and available to watch by all Netflix members.