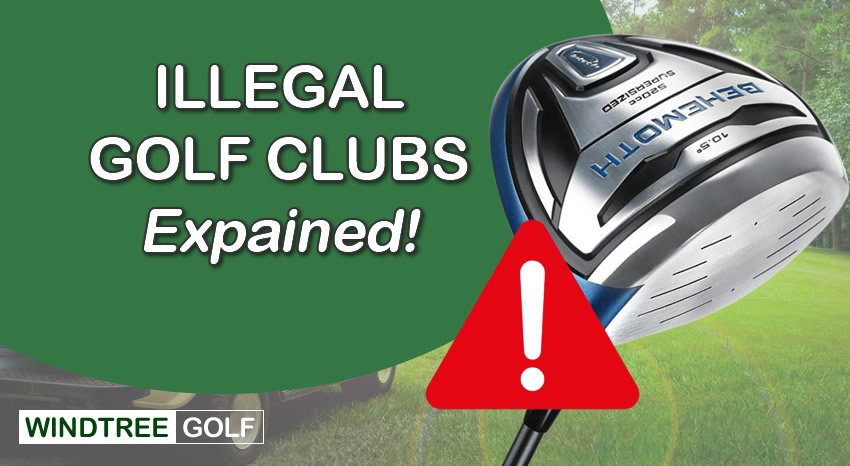 Given the sheer amount of golf clubs that you can choose from in the present day, it’s difficult to know where to begin your research.

But one thing you need to be aware of is that some golf clubs are illegal, and they’re not permitted for use in official tournaments.

So, what exactly is an illegal golf club? How do you know if a club is non-conforming? And can you still buy clubs that the USGA has banned? Let’s find out.

What Are Illegal Golf Clubs?

Illegal golf clubs are those that the USGA or R&A have determined to give players an unfair advantage by design. They’re unconventional and don’t follow the rules of the game in terms of size, loft, or performance.

A great example is the swing-less golf club from PowerGolf. The club is powered by a piston that you place behind the ball, and it flies in excess of 200 yards without you doing anything other than placing it!

Of course, if the swing-less golf club was legal, pretty much every recreational golfer would use it, as it would practically ensure you can hit all fairways and greens in regulation.

It’s important to clarify that it’s not illegal to own these clubs. You’re just not permitted to use them in official games of golf and tournaments. You can still buy them and use them on the range or if you’re enjoying a round of golf with your buddies.

What Clubs Are Illegal in Golf?

Any golf club that doesn’t meet the specifications listed by the R&A and USGA is deemed illegal. The parameters are clear and defined, and there’s no wiggle room whatsoever. If a club comes with gimmicks or promises a certain game-enhancing feature, it’s possibly illegal.

The truth of the matter is that there are too many illegal golf clubs to list here, but some of the most popular illegal clubs currently used in golf include:

It’s important to do your research before adding a gimmicky club to your bag, as you face DQ from tournaments if you play a club that gives you an unfair advantage. If you’re a recreational golfer hoping for a slight advantage and you don’t play competitively, there’s no harm in adding an illegal club to your bag.

However, if you do this, it’s best to inform your golf buddies about it in advance. If you fail to disclose the fact that you’re playing an illegal club, they won’t be particularly pleased about placing a wager with you and ending up out of pocket!

The official list for conforming golf clubs and balls can be found on the USGA website. You can scroll through the entire database or segment your search via driver heads, grooves, or golf balls.

The current list of conforming clubs can be found here.

To save you the hassle of looking through an extensive list manually, you can search the database by typing in the club or ball in question, and you will find out pretty quickly if the club or ball is illegal.

Another thing to note is that most retailers of illegal golf clubs state that the clubs can’t be used in official golf matches on their websites. While they’re not required to do this, it’s in their best interests to do so.

After all, if they advertise a straight-hitting driver with an additional loft that can’t be used in competitive golf, they’re bound to upset their customers! So, make sure you do your research before adding a club to your bag, so you don’t get caught out.

What is an Illegal Wedge in Golf?

Just like any other club in the bag, there are strict rules regarding wedges. Currently banned are wedges with sharp-edged V-grooves. This amendment to the rules was introduced in 2010.

Something else that is illegal on wedges is any brand that has holes through the head. This is something that is popular on non-conforming sand wedges, as it helps the wedge cut through the sand, making the shot easier.

One brand that manufactures non-conforming wedges is Mazel. Although it’s illegal, if you add a Mazel sand wedge to the bag and play it while you’re out on the course with your buddies, you’re likely to see incredible results.

It’s so much easier to play than conventional wedges and can significantly improve your performance in and around the greens. Still, it’s illegal, so you should only use it during practice rounds and not in club medals or other tournaments.

The short answer to this question is yes and no. Some groves are legal, while others are illegal. For instance, square grooves have been illegal since 1990. What’s more, clubs with v-edged grooves are not permitted for use.

In 2010, the USGA introduced revised rules relating to club grooves that affected what you’re permitted to carry in your bag.

According to the USGA, the change was introduced “to protect the fundamental challenge of the game and ensure that skill, not an overreliance on technology, is the prime determinant of success in the game.”

The fact of the matter is that unless you go out of your way to buy an illegal golf club, you don’t need to worry about grooves too much.

This is because the vast majority of golf club manufacturers adhere to strict regulations as far as clubs are concerned, and the leading brands in the market typically stick to them.

What Loft Is Illegal in Golf?

Technically, you can loft a golf club as high as you like. Most lob wedges don’t exceed 64 degrees of loft, and those are pretty difficult to execute. That being said, there is a 73-degree wedge that you can add to your bag.

The same is true for lower lofts. You can see drivers with a loft of anything between 6 and 15 degrees, and the lower the loft, the harder it is to hit. Most drivers that are suitable for recreational players have a loft of around 10 or 11.

Golfers may also like:  The Best Golf Drivers for High Handicappers

Realistically, you don’t want to go any lower than this, as you will struggle to get the ball airborne. So, unless you have a high level of skill when you’re out on the course, stick to the conventional loft ranges for all the clubs in your bag.

Currently, drivers with more than 460cc are illegal, considered oversized, and are too big to be used in competitions. Still, you might find a 460cc driver described as oversized, as it’s the biggest face that is legally permitted.

That being said, some oversized golf clubs are legal, while others are illegal. The reason for this is that oversized means different things to different manufacturers. When considering the legality of drivers, for instance, you need to take the cc of the club into account.

Oversized drivers are characterized by low centers of gravity and generous club faces. This makes them much easier to hit and allows you to middle a drive even if you hit it slightly off-center.

So, while there’s nothing wrong with adding an oversized club to your bag, it’s really important to check that it’s legal before doing so. As far as drivers are concerned, you will be fine with a 460cc driver, even if it’s marketed as oversized.

The golf club market is flooded with illegal products, but that doesn’t mean you can’t add them to your bag! In fact, some people seek out oversized drivers that allow them to spank the ball 300+ yards on the range!

But the key thing to remember is that it’s illegal to use these clubs in official golf tournaments and club competitions. If you carry a club in your bag that is non-conforming, you will be disqualified.

So, feel free to invest in an illegal golf club if you want to try something a little different, but just be prepared for the fact that you can’t use it in an official match.