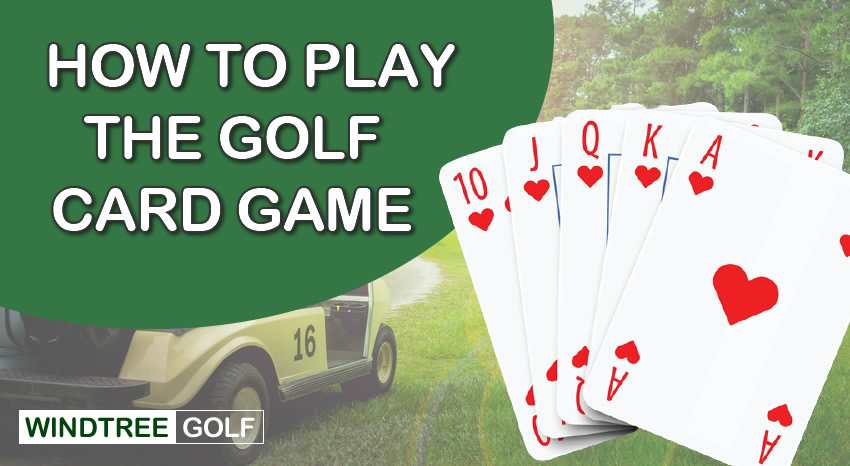 Golf isn’t just a game to be enjoyed out on the fairways and greens of your local course. If you have a standard deck of 52 cards, you can play golf with your family and friends wherever you are in the world.

There are lots of variations of the golf card game, which itself is known by various names, and we introduce you to the basics of the four, six, and nine card versions in this article.

Regardless of the variation that you’re playing, the fundamental objective is to score lower than your fellow players, just like you would hope to do if you play golf in real life.

So, without further ado, let’s dive in and learn how to play golf, the card game.

What is the Golf Card Game?

Golf the card game is explained as players compete to score as little as possible, just like in the real-life version of the ball game. Each player has cards laid out in front of them in a square or rectangle. They then take turns to drawn new cards and replace unwanted cards, which are discarded.

The game is played with four, six, or nine cards, depending on the desire of the players.

Every deal represents one of the holes of golf, so most games last for nine or eighteen deals, which corresponds with the length of most golf courses.

Depending on where the card game is played in the world, it might be referred to as something slightly different.

For instance, in parts of Europe, it is known as Polish Polka or Polish Poker.

In other parts of the world, the four-card game is often called Turtle; the six-card game is known as Hara Kari; while the nine-card game is referred to simply as Crazy Nines.

Ultimately, all game variations are won by the same formula, as players compete to make a layout of cards in front of them while scoring the lowest possible score.

The Four Card Golf game is the most popular form and is started with four initial cards per player. The dealer deals four cards to each player, which are then arranged face down in a square in front of them.

All remaining undealt cards are placed face-down in the center of the table, and the top card is turned face up and placed next to the stock, so all players can see what it is.

This then becomes the discard pile.

Each player is only permitted to look at the two cards nearest to them once at the start of the play, and they’re not allowed to be looked at again until they’re discarded or scored at the end.

Moving clockwise, players take turns to draw cards from the pile, which can then be used to replace one of the cards in their layout.

Related Article  Golf Digest vs Golf Magazine: Which Is Better for Me?

This is then placed facing up on the discard pile.

If you don’t want to play the card you’ve drawn, you can put it on the discard pile directly.

Once the play is over, every player’s cards are revealed and placed face-up in the layout.

Most people score a King at zero and an ace at one, while a two sometimes represents minus two points, but this is more commonly the case in the six and nine-card versions.

We explain the scoring of golf in detail a little later on.

After nine or eighteen deals, the player with the lowest cumulative score is the winner, just like they would be out on the golf course.

It’s important to note that this is the game of golf in its most basic format, and there are often variations to the way it is enjoyed.

The main difference between the six and four card versions of the card game golf is that the six-game version is all about finding pairs.

A pair of cards in the six-card game scores zero, so players look to score pairs in the relative columns of their layouts while trying to keep the other cards as low as possible.

Following the same setup as the four-card game, the difference is in the layout, and cards are placed in front of each player in a rectangle instead of a square.

Players can choose to look at any two of the six cards in front of them before the game commences.

Moving clockwise, each player takes turns removing a new card from the stockpile and can choose to replace or discard it.

The cards are scored at the end of the play, and the lowest cumulative score is the winner.

The scoring of the six-game version is slightly more complicated than the four-card version and is explained below:

While the four and six-card variations of golf are played with one 52-card deck, nine-card golf is played with two or more decks of cards. The game begins as each player is dealt nine cards in their layout, which are lined up in a three by three square.

Three cards are turned face up to begin the play, but other than this, the style and essence of the game are almost the same as six-card golf.

However, one notable difference is that instead of looking for pairs, players are looking for a column of three equal cards to score zero.

It’s perfectly fine to use the same scoring system as outlined in the six-card version for nine-card golf, but some people like to add variations.

Some players leave jokers in, for instance, which count as minus two or three points.

There are some exciting variations to the basic three games that we’ve highlighted in this post, and you can read all about them by clicking here.

Related Article  Is Golf a Boring Sport? - Read the Verdict!

Rules of the Golf Card Game

Although there are many variations to the rules, and the four, six, and nine-card versions are slightly different, below is a general overview of the rules of the card game golf:

How Do You Score the Golf Card Game?

Although players score golf in different ways, the established scoring mechanism for each variation is explained below:

The list above is the widely accepted scoring system of the game, but as long as you agree with the other players before the game starts, you can score it in whichever way you choose.

The winner is the player with the lowest cumulative score after nine or eighteen plays.

Players should mark their scores on a piece of paper after every round.

So how do you win at the golf card game?

Like with every card game, a combination of good luck and a decent strategy will improve your chances of winning at golf. When you start the game, remember that aces and kings are what you’re looking for.

If you’re playing the six or nine-card version of the game, you should be looking to form pairs and triplets, respectively, no matter which cards you’ve looked at.

Essentially, keep an eye out for cards of a lower score than you can trade for higher cards in your layout.

As you progress through the game, you will find that your instinct is just as important as your strategy when playing golf!

Yes, the Golf Card is Fun to Play!

No matter which variation of the golf card game you play, you will likely have an enjoyable experience with your family and friends!

It’s fast-paced and down mainly to chance, but those who develop a decent strategy will be able to increase their chances of winning.

So, if the weather is lousy and you can’t get out on the golf course with your buddies, invite them over for a game of the card version of the game and see who’s able to shoot the lowest score.