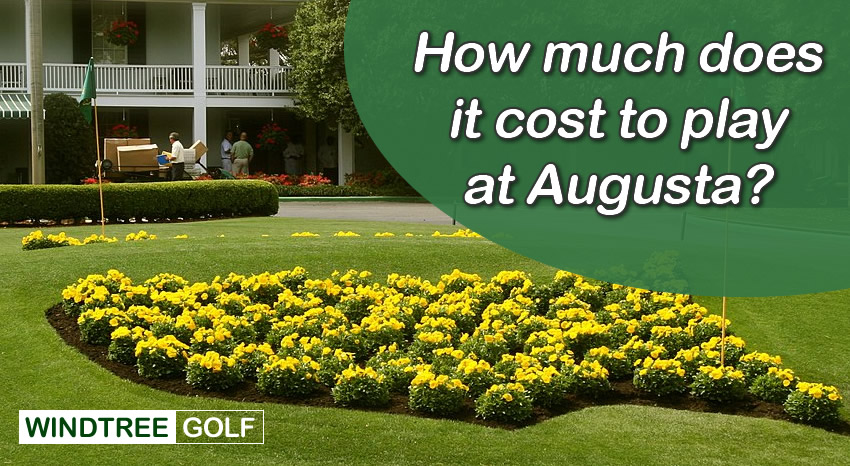 The four major championships on the PGA Tour are the highlight of the golf season.

Highly anticipated is the first major held at the beginning of April at the Augusta National Golf Club in Augusta, Georgia. The biggest names of the game have won this event multiple times, including a record six by Jack Nicklaus and five by Tiger Woods.

Golf fans everywhere have dreamed of playing the beautiful Augusta National course, but just how realistic is playing there? What is the cost to become an exclusive member?

Also, how difficult is the layout, and what makes the course challenging even for the best players in the world?

Can You Pay to Play at Augusta?

If you expect to wake some Saturday morning and decide to go to Augusta National to play a round, think again.

Unless you are a member you cannot pay to play. The Augusta National Golf Club is a private club and only accessible to club members and their guests. The only way that non-members can visit the course is during the Master’s Tournament.

How Much Does it Cost to be a Member at Augusta National?

Being a member at Augusta National is an honor, but most likely you need to be a prominent name with a big wallet in order to have a chance at membership.

The initiation fee is estimated to be in the ballpark of 20 to 40 thousand dollars and a few thousand per year per member.

Extra cash will be needed for lodging for guests, but for an exclusive club, the fees aren’t outrageous.

The biggest issue is actually becoming a member. Applying for membership, although technically allowed, is pretty much taboo.

Word is that your chances of membership decrease to nearly zero if you apply.

August prefers to keep its membership level to a few hundred people. If a member leaves or passes away, then a new member will take his or her place.

Generally, this is some prominent person in entertainment, politics, and CEOs that are known by current members.

Golfers may also like:  Can You Play Golf in the Rain? (Explained!)

For the average person, it appears your chances of becoming a member are worse than hitting the lottery.

How Much Does it Cost to Attend the Masters?

To attend the Masters, you must be an owner of a patron badge. The problem is that no one outside of Augusta National knows how many of these coveted badges exist.

The great thing is, if you can actually get your hands on one is that they are yours for life.

The cost is $375 per year for the entire week of festivities, including the practice rounds, par 3 tournament, and the Masters itself. Children ages 8 to 16 can attend for free if accompanied by someone with a badge.

For the past nine years, there have been a limited number of tickets available for each round through a lottery on their official website.

You must apply for the lottery 10 months in advance and the prices for tickets for the recent event were $115 each, limited to two per round.

You could go for a practice round ticket for Monday or Tuesday, for possibly less than $1,000.

If you want to see the tournament rounds without a patron badge, be ready to fork over at least $1,000.

You may also attempt to get ticket packages from travel services, but be sure the company is trustworthy before dishing out your cash.

Is Augusta the Hardest Golf Course?

Some of the par fours are among the toughest in the world. While there are holes that are seen as birdie holes for top professionals, there are several where you are happy to take your par and move on.

Particularly brutal is the 495-yard, par-4 10th that has traditionally been the toughest hole. It has a scoring average of 4.3 throughout the Masters with a 4.7 average.

Last year, the par-4 5th was the most difficult, playing at 495 yards. It was lengthened by 40 yards in 2019 and played as the toughest hole during the Masters.

Combine that with one of the toughest greens on the course and two bunkers on the left side and players are elated to walk away with a par.

The dogleg-right forces many players to play safe right off the tee and on their approach. Anything left has a chance of going into the water or greenside bunkers.

This hole is the start of the infamous “Amen Corner”, which begins the most telling three holes on the course.

Why is Augusta Golf Course So Difficult?

Augusta National isn’t the longest golf course and it generally has wide fairways – so what is it about the course that makes scoring so difficult?

First, you have to be a master at shot shaping. Many of the holes play right-to-left and players who can shape effectively have shorter approach shots to the green.

However, mishits can lead to disaster, and playing safe leads to long approach shots that are difficult to stop on the greens.

In addition, because of different pin places and slopes to the greens, players must be adept at moving the ball both ways to have decent chances for birdies.

Most professionals have a typical shot shape, and being forced to perform all shot shapes with major pressure surely will be daunting.

Controlling trajectory combining with precise distance control is vital over the course of 72 holes at Augusta National. Some holes require landing the ball on the proper level of the green.

For example, landing a low long iron on the 15th green and risk going long, perhaps into the water.

Learning the types of shots you need to hit at Augusta National is a difficult task. It’s no wonder that experience plays a key role in success at the Masters.

Finally, players must have a strong short game at Augusta in order to succeed.

Golfers may also like:  Golf Digest vs Golf Magazine: Which Is Better for Me?

The perfectly manicured and firm conditions are difficult for the inexperienced. Players must take time days prior to the event to get used to how the ball reacts on the Bermuda grass.

This could mean experimenting with different types of wedges and lofts.

Players must excel in all phases of the game to come out on top at the Masters. It’s what makes this championship one of the most difficult to win.

Augusta National: One of the Best Courses in the USA

The Masters is one of the most anticipated tournaments on the PGA Tour schedule each season.

Fans across the country mark their calendars for the beginning of April for this illustrious event.

Not only do players love to watch the action, but dream of playing this course that Jack Nicklaus, Tiger Woods, and Arnold Palmer won a combined 15 Masters.

The reality of the matter that is unless you are one of only 300 members, you will never play the course no matter how much money you are willing to pay.

You may be fortunate enough to secure a patron badge for $375 per year to attend the Masters. Of you could dish out $1,000 or more to attend a practice round of even one of the rounds of the tournament itself.

If you do watch the Masters at the course or on television, be aware that Augusta National is one of the most difficult courses in the United States.

While birdie opportunities are available, several of the par 4s are brutal and “Amen Corner” is where many Masters are won and lost.

Keep in mind that the best players in the world must be adept at shot-shaping, precision trajectory, distance control, and a sharp short game to take home the coveted Green Jacket.