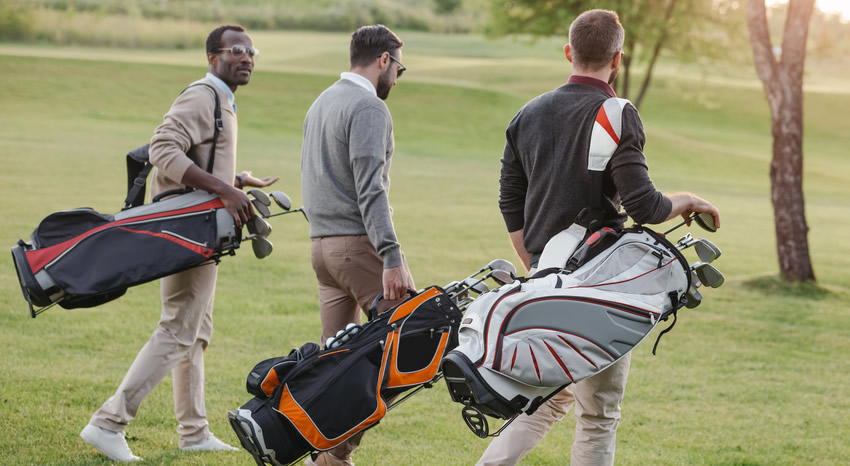 Golf is a complex game with many rules, regulations, and strict etiquette to follow but what about the rules on golf club numbers? Let’s find out if there is a limit to the number of golf clubs you can have in your golf bag.

What is the Total Number of Clubs Permitted in a Golf Bag?

The rules of golf, as covered by rule 4.1b* from the USGA permit you to carry a maximum number of 14 golf clubs in your golf bag. This rule also stipulates that you are allowed to add clubs to your bag during your round as long the total does not exceed the 14 club limit.

Why is There a Limit on the Number of Golf Clubs I Can Carry?

There are 3 main reasons why the rule exists on club carry limitations, which include:

Golfers may also like:  Maltby Golf Clubs Reviews (Any Good?)

What Happens If I Carry More than 14 Clubs?

There are strict penalties in force for rule-breakers, particularly in tournament golf.

Below is information on the penalties incurred for the common types of tournament golf, match and stroke play.

The penalty in match play is that a player’s total score is reduced by deducting one hole to a maximum of two holes.

In match play, when you are playing a hole with more than 14 clubs you are penalized at the end of the current hole.

A player must finish playing the hole and then apply the penalty at the end of the hole.

You score the hole as normal but then apply the penalty afterward, giving you the final score for that hole.

If a golfer is playing in between holes and breaks rule 4.1b then the penalty is incurred from the point of the last hole played.

The cost of breaking the maximum club rule in stroke play is severe.

A player can receive a maximum of a 4 penalty stroke deduction in match play, per round.

Can I Be Disqualified for Carrying More than 14 Clubs?

All players have the opportunity to take immediate action if they realize they are carrying more than the allowed 14 clubs.

This action avoids disqualification from the course and the procedure to avoid being disqualified includes:

Golfers may also like:  Delta Airlines Golf Clubs Rules (You Should Know!)

A player that refuses to adhere to the above rules can be disqualified as they would be in breach of rule 4.1c(1.)

Yes, a putter is not classed as an additional club so this must be part of the 14 club limit rule.

Can I Legally Carry More than One Putter?

You can carry as many putters as you like on the course as long your total club allowance does not exceed fourteen clubs.

You may have trouble hitting your tee shot more than 10 yards with your putter though!

Most golfers carry one putter in their bag and choose from a blade, weighted, or mallet style depending on play-style.

What are the Recommended Clubs I Should Use?

With 14 clubs you have plenty of options when it comes to club selection so do not worry about meeting the legal requirements.

The best clubs for you to use may be determined by your golf handicap and course layout but of course, many people use the standard set of 12 clubs plus 2 wildcard picks.

The standard set includes drivers, woods, irons, wedges, and putters with most new players preferring to use a driver, 2 or 3 wood, 3 hybrid, a set of irons (6 in total, ranging from 4 – 9), pitching wedge, sand wedge and in finally the putter.

This makes up 12 clubs which is recommended for a beginner.

For lower handicapped players or pros on the PGA tour then the two additional clubs might be another hybrid or a specialist “A Wedge” club which is designed to fill in the gap between a long iron and pitching wedge.

Golfers may also like:  Can You Rent Golf Clubs? (This is How!)

you can legally share golf clubs with a partner as long as the total number of clubs between the two players is no more than 14.

So for example, Joe has 8 clubs and Fred and has 6 in his bag then these two players could swap clubs as many times as they like.

But if Joe had 12 clubs and Fred had 10 clubs then either player could not share golf clubs with each other as it totals 22 clubs.

Can I Replace Clubs During a Round?

A player cannot replace a club during the round of golf.

If a club is damaged then there is scope for replacement dependent on the below factors:

If the above 3 points are satisfied and there is no delay to the match and a player does not borrow a club from another player then a replacement club can be issued.

Stay Legal on the Course!

Golf is a game of skill and fun, but it can also be frustrating when you’re not sure what the rules are.

The USGA has created an extensive list of regulations that cover every aspect of golfing from the size of your club to how many clubs you can carry in your bag.

To stay on the right side of the law (and have a better time playing), review our tips before heading out onto the course next time!

* USGA Rule 4.1b concerning the number of clubs allowed in a golf bag.