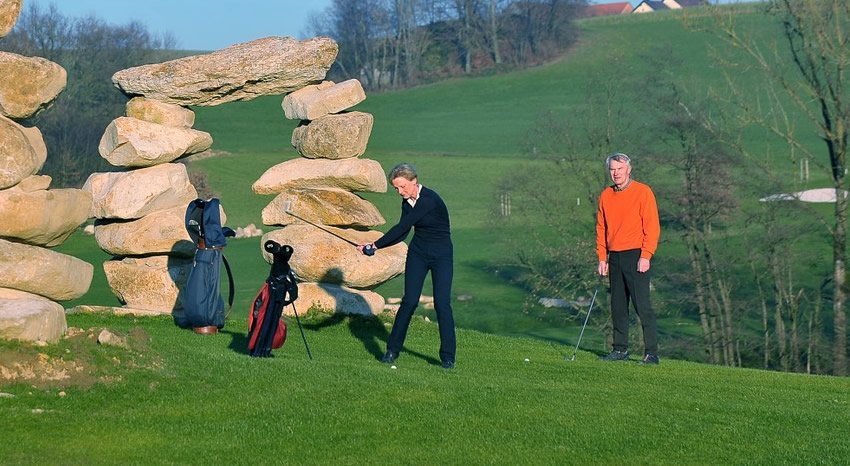 Are you new to golf and want to know the best type of fun golf games to play with friends? Let’s talk about one of the most popular formats – the golf scramble. We have everything you need to know including, format, rules, and cool strategies on how to win!

A golf scramble is a game where two or more teams of four to six players each compete against one another. The object of the game is to complete as many holes in as few strokes as possible while using any combination of individual shots on a team’s turn.

In the US, a scramble has several variations, from Ambrose to Bramble, Las Vegas Scramble, Florida Scramble and more!

But there is no such thing as these are two different golf competitions.

The famous scramble has many format variations, including:

Related Article  How to Start Playing in Golf Tournaments - Get Started!

Golf Scramble vs. Best Ball: Which is Better?

Each player from the team hits a golf shot from the tee. After this, the team (or the designated team captain) picks out the best shot. The players whose shots were not chosen continue on with their second shot. They all start from the same spot of the known best shot but within one club-length and not closer to the hole.

After this second shot, the play keeps on until a ball gets to the hole. The team takes the score after each hole based on that one best shot from every position on that hole.

To make it easier to understand, Justin Rubenstein of VIP Golf Services has this explanation: Let’s take for instance that there are two players, Player A and Player B.

As they take a shot from the tee, Player A did the better drive. Player B then picks up his golf ball, approaches Player A’s drive, and hits right from there. Player B hits the one that’s closer to the pin. Player A would then play from the position of Player B until the ball reaches the hole.

Every team member plays their own ball to get through each hole. The score for every hole will be the lower score made by one of the team members.

Again, using the Player A and Player B explanation, if Player A gets a 5 and Player B gets a 4, then the team score is 4 as it is the lowest. Some tournaments, however, use handicaps to be fair. All members are given the chance to their balls for the complete 18 holes.

Related Article  Nine Holes of Golf: How Many Steps Does It Take?

Golf Scramble – Tips on How to Win!

Team strategies should be in place to make sure that your team has the best chance to win in a golf scramble.

Think about the best order of play – Let weaker players hit first. The best putter must be the last. If in case the weakest player misses a good play, then the next one will do its best to deliver a better hit. If the first, the second, and the third player did not do well, it’s time for the best butter to make a good comeback for the team.

Choose the ball with the best view to the hole – Scramble is all about reaching the green in the smallest number of strokes possible. The team should choose the one whose drive got selected to be the first to do the second shot.

How Long Does A Golf Scramble Take?

Playing in a four-person scramble golf tournament may take you an estimate of 5 hours on the course.

When the course is packed with people and everyone begins on different holes, the tournament play can get really slow.

Watch other teams’ games so you will overcome boredom. Focus on the game as well.

Check out strategies so you can learn from them. This will bring more excitement to you that you will not realize that you are on the course for very long already.

Others are specific, though, saying that the time it takes to play a golf scramble differs with the number of holes.

If the scramble tournament is played in 9 holes, it may only take between 1 and ½ hours, and two hours. If it’s 18 holes, it may be 3 hours to 4 hours.

However, you should not put too much pressure on yourselves when you play a golf scramble.

This contest is played for fun. What’s important is that you know the rules or the format of the game.

We hope our guide helps you better understand “what is a golf scramble?” – now get out on the course and give it a go!