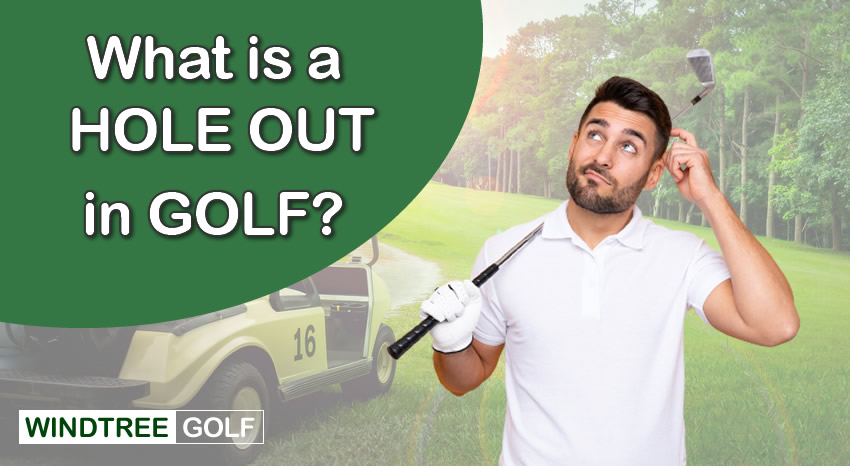 If you’ve ever watched golf on TV, you may well have heard commentators use the term ‘hole out.’ But what does it mean?

Simply, a hole out is when a golfer knocks the ball into the hole from off the green. There are lots of different hole-outs, and they can occur from just off the green with a wedge, from far back on the fairway with an iron, or even off the tee from a par three.

For most recreational players, hole outs occur after a combination of a great strike and a little bit of luck!

To help you fully understand the term ‘hole out’ and learn some of the rules associated with holing the ball, we answer some important questions about finding the cup out on the golf course.

What is Considered a Hole Out in Golf?

A hole out in golf is what happens when a player finds the bottom of the cup from a considerable distance. While a putt is technically a hole out, the term is most commonly used to describe a shot that a player has made from off the green.

This can be either on approach or even directly from the tee on shorter holes, which is known as a hole in one.

What Happens if a Golf Ball Goes in the Hole and Comes Out?

If you watch your ball sail into the cup from afar, only for it to pop back out a second later, you have to continue playing the hole and address the ball for your next shot. In the rules of golf, the ball must be “at rest in the hole” for it to be deemed complete.

The R&A further elaborates on this rule and provides the following clarification:

“The words “at rest” in the definition of holed are used to make it clear that if a ball falls into the hole and bounces out, it is not holed.”

So, pat yourself on the back for the effort, but keep your putter handy to finish off the hole!

Does the Golf Ball Have to Touch the Bottom of the Hole?

For a putt to be made, the ball has to be at rest below the level of the lip. Whether you’re putting from the fringe or chipping in from the trees, if your putt lips out or even disappears into the cup only to resurface on the green, it isn’t considered as holed.

As it’s impossible for your golf ball to float in the middle of the cup, you can assume that it must be fully at rest at the bottom of the hole before you can move onto the next tee.

Related Article  How to Start Playing in Golf Tournaments - Get Started!

If your ball is wedged between the flagstick and the hole, you need to carefully prise the flagstick out without the ball popping out.

You have probably seen golfers wiggle the flag in these situations to ensure the ball comes to rest in the cup before they remove the flag.

Is it a Hole in One if You Hit the Pin?

A hole in one only counts if the ball comes to rest at the bottom of the hole. If your tee shot on a par three skids off the surface and clips the pin before coming to rest on the green, it is not a hole in one.

However, if your tee shot hits the pin and then drops into the hole and stays there, it is a legitimate hole-in-one.

The rules regard the final resting position of the ball, and it doesn’t matter if it hits the pin on its way in.

You may have noticed that some golfers now leave the pin in the hole while they’re putting (thanks to a recent rule change), and the putt counts just as it would if the flag was out.

How Do You Get a Golf Ball Out of a Hole? (+5 Etiquette Tips)

When you’ve sunk your putt, you need to remove your ball from the cup with your hand in a way that is respectful to your fellow players and ensures you don’t damage the hole or the surrounding areas.

Here are 5 etiquette tips to consider when removing your ball from the cup:

Can You Take the Flag Out in Golf?

You can remove the flag when your ball is on the green, and you’re preparing to sink your putt. Before 2019, you would receive a two-stroke penalty if your ball hit the flagstick while you were putting on the green.

However, the USGA changed the rule in 2019, stating:

“There will no longer be a penalty if a ball played from the putting green hits a flagstick left in the hole.”

That’s a pretty clear amendment! When you’re on the green, you can now leave the pin where it is, remove it altogether, or have someone “tend” it, before removing it when you’ve struck your ball.

Related Article  Why Is Golf So Expensive to Play! (How Much is this Sport?)

What is the Last Hole in Golf Called?

The last hole in golf is simply referred to as “the eighteenth.” Some of the most famous finishing holes in golf are given nicknames, such as “Holly” at Augusta National.

You may also have heard of “the nineteenth” hole in golf.

In golfing parlance, the 19th is an affectionate name given to the clubhouse or a local bar or restaurant in which golfers gather at the end of the round to socialize and discuss the game.

For many people, the nineteenth is unofficially the last hole in golf and the most important!

What Are the Rules if You Get a Hole in One?

There 4 rules you must follow in order for your hole in one to be made an official shot.

Hole in ones are often the pinnacle achievement in a golfer’s lifetime, but there are also a number of “rules” related to the making of this famous shot. To be a legitimate hole in one, you need to satisfy the following criteria:

While the above is the official hole-in-one rules, perhaps the most famous tradition associated with a hole-in-one is the unofficial rule!

In most golfing cultures around the world, if a player shoots a hole-in-one, they’re required to buy the drinks for their playing partners and perhaps everyone else in the clubhouse at the time!

Every golf club has its own traditions in relation to hole-in-ones, so it’s worth checking what is expected within your club before you make your once-in-a-lifetime shot.

Some golf insurance companies offer hole-in-one insurance, which protects players financially if they end up having to buy drinks for everyone at their club!

The Hole Out Explained!

A hole-out from any position on the golf course does wonders for your scorecard and can shave a couple of shots off your card when you were least expecting it.

For golfers of all levels, a hole-in-one is pretty much a once-in-a-lifetime achievement and is the most famous hole out of them all.

As you can see from above, there are lots of things you need to consider when you’ve holed out to make sure your shot counts and you don’t fall foul of poor etiquette.

The only thing that’s left to say is congratulations on your hole out; it’s a great achievement for any golfer!