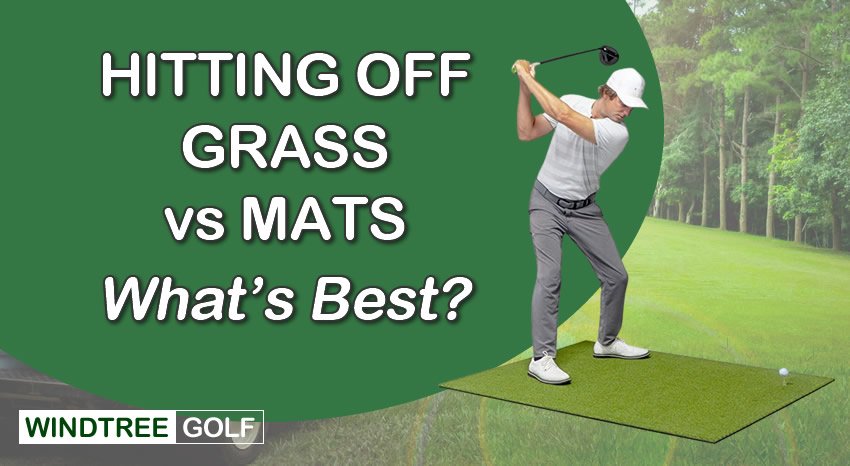 Golf is meant to be played off the grass; there’s no doubt about it. But to protect the turf during wet weather, some golf courses insist that players take their shots from mats during the winter months.

Also, most driving ranges and golf simulators come with golf mats equipped as standard, meaning everyone is likely to play from a mat once in a while.

So, with that in mind, what are the differences between hitting off mats and grass? And how do you ensure you don’t damage your clubs? Let’s find out.

Differences Between Hitting Off a Mat vs Grass?

The primary difference between hitting off a mat and grass is that you’re unable to get under the ball in the same way. Hitting under the ball is a hugely important part of the game, particularly when you’re hoping to generate spin and get the ball to simmer on the green.

Hitting off a mat may also cause you to change your swing slightly, as you can’t strike down on the ball as much as you can when you’re playing from the grass. 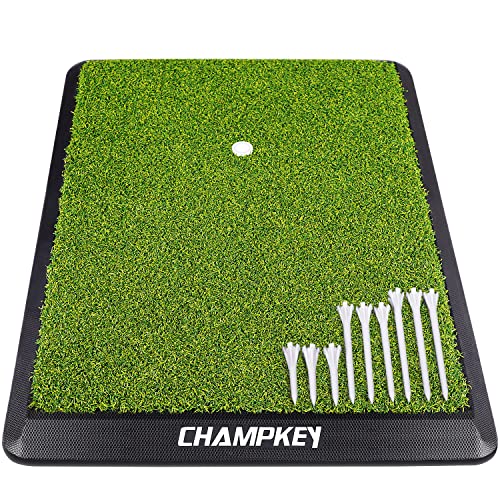 Statistics show that hitting off a mat can also help the ball fly further, particularly when you catch a strike flush.

This is one of the reasons why so many golfers enjoy such consistent ball striking on the range, only to turn up at the golf course and struggle to get the ball airborne!

Some people like hitting off mats, while others hate it. But does regularly playing off a mat affect your game in the long run?

Will Hitting Off Mats Hurt My Game?

Yes, the three main ways why hitting off mats can disrupt and lower your overall golf game is lack of spin options, increase risk of injury, and the fact that you are practicing off mats and then playing on the grass out on the course.

Lots of people make the case that hitting off mats can hurt your golf game in the long run. This is mainly because you can’t exert the same level of control over the golf ball as you need to hit under the ball if you’re to generate the required level of spin.

Some golfers also argue that hitting off mats can increase your chance of injury. This is because the shock of impact between the club and the mat is tougher on the hands, wrists, and shoulders, which may cause joint issues or pain in the future.

Golfers may also like:  What is a Tee Time in Golf? 9 Facts You Should Know!

There’s also the fact that if you play off mats one week and grass the next, you might need to make subtle adjustments to your swing. This can wreak havoc with your setup and might lead to a lack of consistency as far as your ball striking is concerned.

That being said, if you head to the range a couple of times a week before taking to the golf course with your buddies at the weekend, you won’t necessarily experience a huge amount of difference as far as your ball striking is concerned.

Does Hitting Off Mats Hurt Your Clubs?

Yes, hitting off mats can damage your golf clubs, particularly from an aesthetic point of view. For instance, you might find green or black marks on the soles of your clubs after a long practice session, and they’re pretty difficult to remove.

However, some people also make the case that consistently practicing on mats can affect the structural integrity of your clubs. This is due to the harder surface that you’re hitting down upon, which is much more pronounced than playing off the grass.

Although it doesn’t happen often, some players might notice the lie angles alter on their custom clubs, while others might even see the club heads loosen from the shafts.

This is particularly the case if you’re someone who often hits down on the ball too much.

With all things considered, hitting off mats can damage your golf clubs, but it’s not a foregone conclusion. If you’re controlled and measured with your practice and don’t hit down too much on the golf ball, you can practice on mats without issue.

Why Can’t I Hit Off Golf Mats?

There could be a number of reasons why you struggle to hit the golf ball off a mat. Perhaps the most common issue is that you are struggling to adapt your swing to the hard surface.

A golf mat is like a tight lie on the golf course, meaning you have very little room for error. Obviously, it also means you can’t strike under the ball, which limits your ability to generate spin and a great deal of control of the ball.

If you’re struggling to execute golf shots from a mat, we’d recommend teeing the ball up to start with, as this will make it easier for you to strike the ball more naturally without having to worry about getting underneath it.

Golfers may also like:  Arm Lock Putting Technique Explained: Does it Work?

Another good tip is to start with higher lofted clubs, as you don’t have to work as hard to elevate the ball. But as is the case with all aspects of golf, the more you practice on mats, the easier it will become to hit the ball consistently.

Are Golf Training Mats Worth It?

Golf training mats are undoubtedly worth it, but it largely depends on how you plan to practice. For instance, if you have a net in the back garden, putting a mat down will protect your grass from damage and means you can practice in all weather conditions.

Training mats are also great as far as golf simulators are concerned, as they help you generate the required ball flight and trajectory that you want to see.

However, if you have a golf driving range close to your home or typically head to the practice area of your local club to improve your game in between rounds, you don’t necessarily need to invest in a golf training mat at home.

So, if you’re looking for a viable way of improving your game at home and you don’t want to damage the grass in your garden, investing in a golf training mat is undoubtedly worth it.

In most instances, you can expect to hit the ball further off a mat when compared to your ball striking on grass. This is because the club isn’t able to dig in and hit under the shot, which causes the face to bounce up slightly before impact.

This means that you catch the ball slightly higher on the face than you ordinarily would, making it much more difficult to spin the ball.

It also means that the ball will carry further than it would if you hit it from the grass, as there is less friction generated at the point of impact.

For most players, the distance won’t be hugely different, and we’re talking of perhaps 10-20 yards at most.

But the fact that mats help you hit the ball further accounts for the fact that many players find themselves flushing it at the range, only to head to the grass on the golf course and feel as if they’re back to square one!

Our advice is to practice on different surfaces as much as you can, as this will prepare you for whichever surface you find yourself on out on the golf course.

Tips for Hitting Off Mats? (for Longer Hitting!)

If you regularly attend the driving range and hit off mats more often than not, you might find yourself adjusting your game ever so slightly. Here are some tips that will help you hit the ball consistently when playing off mats:

Golfers may also like:  Golf League Software: Which is Best (Free or Paid?)

Playing golf from a mat is an excellent way of extending your golf season, as you can play when the weather is far from ideal. Hopefully, the above tips will help you adjust your game and ensure your ball striking doesn’t suffer as a result.

What Should I Put Under My Golf Mat?

When you’re placing your golf mat, it’s best to add it to a firm surface like concrete or a solid wooden floor. This will keep it in place and ensures that you can execute your shots without the mat moving.

In this sense, you don’t need to put anything extra under your mat for it to do its job. If you’re putting a golf mat on the grass in your garden, make sure it comes with a rubber base or something similar so it doesn’t sink into the muddy ground beneath!

The good news is that you can use golf mats on most hard surfaces, so you don’t need to worry too much about where you place them. Whether it’s indoors or outdoors, a golf mat can be an excellent addition to your home practice setup.

If you’re someone who enjoys playing golf all year round, then you have probably played from mats when the weather is wet. Equally, most driving ranges have golf mats installed as standard.

While there isn’t a huge difference between playing from mats and grass, it is important to be aware of the slight changes to your swing and ball striking, so you can compensate and step up to the ball in the confidence that it will fly where you intend.