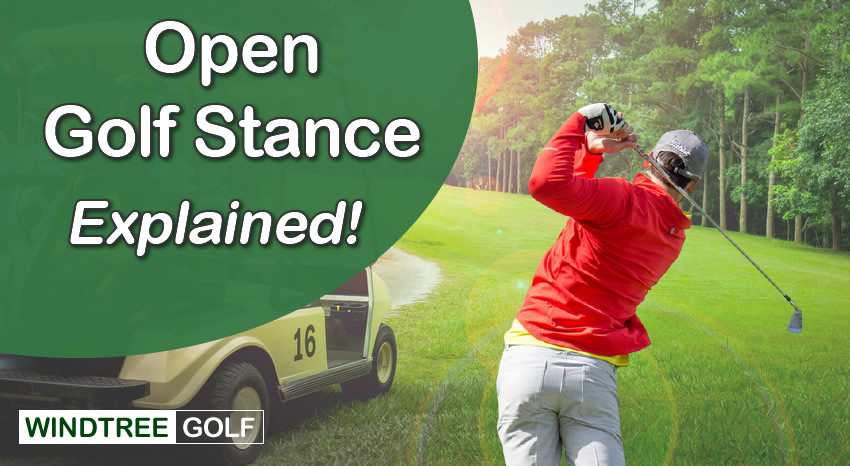 Golf is a game that sends us through a whirlwind of emotions and constant swing tinkering until we find one that works to suit our games. The ultimate goal is to groove a swing that we can rely on in every round through weekend play to the pressures of tournament competition – but what is the open stance and how does it work and benefit you.

To explain, an open stance is one in which the toe line of a right-handed golfer is aimed to the left of the target line and vice versa for a left-handed golfer. Generally, the clubhead is aimed at the target. How wide the stance depends on the height of the player.

The road to finding this swing often involves numerous types of swing planes, grip setups, and other tricks.

Check out our video below for an awesome example of pretty much the perfect open stance golf swing – before you look can you guess which legendary golfer it could be?

In the end, we wish to find a combination of all of the above to provide the consistency that every golfer strives for.

3 Benefits of the Open Golf Stance

a) Allows the Body to Fall into the Slot

One advantage of the open golf stance is that it allows the club to properly fall into the slot. What this means is that too many amateurs find themselves pulling the club down with too much force at the top.

When the upper body moves first in the transition from the backswing to the downswing, an over-the-top motion occurs, causing a slice.

Golfers may also like:  How to Stop Slicing the Golf Ball (7 Tips to Check Out!)

With an open stance, the golfer can more naturally transition into the downswing, keeping the upper body quieter.

What happens is the golfer can be more patient, allowing the body to clear out just a bit before the arms naturally follow down.

This causes the club to fall into the correct slot, allowing the clubface to be squarer through impact.

A second advantage is that it allows the hips to clear properly.

This is another struggle that many high handicappers have. Faulty clearing of the hips can lead to contact problems and loss of distance.

Using an open stance promotes a freer and smoother tempo.

Just look at 15-time PGA Tour and 13-time PGA Champions Tour winner Fred Couples – he’s changed to an open stance and has one of the most silky-smooth swings in all of golf.

Fred Couples is over 60 years of age – if he can do it then there is no reason why all seniors cannot perfect this technique.

Last, but not least, is the potential for more power.

With the emphasis on power in the modern game, golfers of all skill levels are looking for the edge off the tee.

Using the open golf stance is one way to get an edge.

With the proper clearing of the hips (step b), the clubhead can accelerate through the impact, allowing for maximum power.

The open stance will allow the club to fall into the slot, creating the proper sequence of events on the downswing through impact and follow through.

The result is consistently better contact with the golf ball on impact – which is also good for players looking to break 100 in golf..

Tips on How to Master the Open Golf Stance

To get the most out of an open stance, be aware of some essential tips for when you do your practice drill.

First, be sure to square up the club face to the target with a solid hand grip on the club. By doing so, the ball will start towards the target with the flight path of a slight fade or draw.

Failing to square up to the target could result in a shot straight in left (right-handers) or right (left-handers), a dreaded pull or slice.

It takes some practice to keep your club square to the target and swing along that line while your foot line is open.

This leads to the second tip, which is to keep the club path along the target line.

If you want to try hit a pull fade or a straight pull, ten you can swing along the foot line.

Other than that, to use the open stance effectively, you must keep the swing path down the target line.

If you want to hit a push fade, you can do so with an open stance with a swing path that is out to in.

Some of the greats of the game, including Lee Trevino and Jack Nicklaus mastered this shot.

Third, don’t worry about hitting a perfectly straight shot – this is one of the most difficult things to do in golf.

The face must be lined up perfectly square along with the perfect swing path through the ball.

It’s better to try to create a draw or a fade.

Note that the ball will start where the clubface is at impact and curve in the direction away from the swing path.

Consciously be aware of three lines: feet, shoulder, and clubface.

Practice, practice, and more drills is the key to keep the clubhead moving along the intended target line.

Try to feel your front hip moving back and away from the target on the downswing.

Golfers may also like:  Butch Harmon Facts: (How Much for a Lesson?)

If you push your hips forward or slide too much on the downswing, the likely outcome is a pushed shot and/or poor contact.

If you master moving the hip back and away from the target, the club will fall into the slot, freeing up the rest of the swing for more solid, powerful contact.

Last, but certainly not least, is to maintain poise and patience throughout the swing.

Don’t rush getting back to the ball. Complete the backswing, let the body move a bit before pulling the arms through the shot.

Remember that the arms will always move at a higher rate of speed than the body.

The tension buildup from players pulling too hard with their arms at the top causes a reduction in swing speed.

Keep it slow, smooth, and steady, and watch your distance increase.

One of the most enjoyable parts of learning the golf swing is the plethora of information available.

Of this information, one of the fundamentals that have been driven into the minds of beginners, high handicappers, and seniors is that everything must be lined up.

This starts from the shoulder to the feet to the clubhead.

Look into the history of the game and you’ll see all-time greats that played with both closed and open stances.

Jack Nicklaus won 20 majors and 73 PGA Tour events with an open stance and a flight path that was predominately a power fade.

Those with a closed stance included greats Arnold Palmer and Sam Snead, who used a power draw as their go-to shot.

A great benefit about the open stance golf swing is the feeling of using the left arm (right-handed) or right arm (left-handed) on the downswing.

This is particularly the case with irons and a strong grip.

The result is generally a penetrating, powerful ball flight with what appears to be little effort.