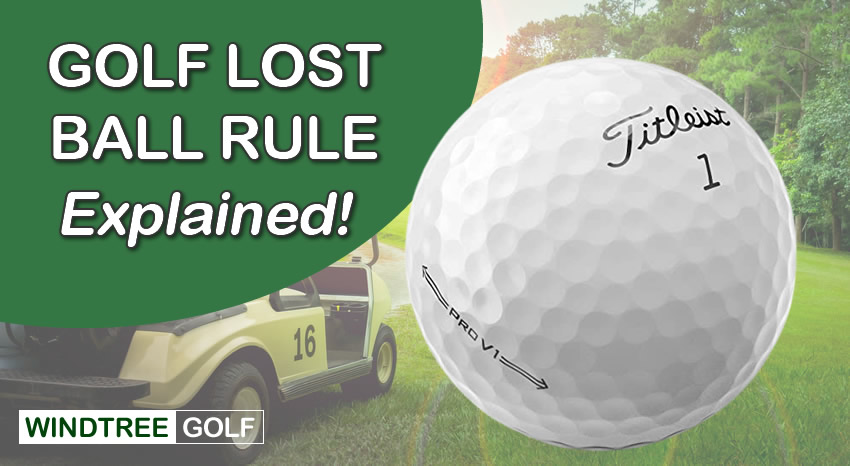 Few things upset and infuriate a golfer more than a lost ball. In spite of your near-perfect address and the fact that you remembered every little part of your setup, sometimes the ball just flies off in a direction that you couldn’t possibly have predicted!

And because these little mishaps are common out on the golf course, it’s important that you fully understand the golf lost ball rule, so you can amend your score accordingly and don’t hold up the people playing behind you.

But don’t worry; we’ve all been there that’s why it’s important to thoroughly know what the lost ball rule in golf is and how it works!

What is the New Rule for A Lost Ball in Golf?

The USGA announced a new local rule that provides an alternative to the traditional stroke-and-distance penalty for a lost ball out on the golf course. The rule has been introduced to speed up the pace of play and allows golfers to play on without returning to the location of the previous stroke.

They can take a shot at the point where the ball was lost for a penalty of two strokes.

As it’s a local rule, it should only be used in casual or recreational golf and is not suitable for competitions.

What Happens if You Tee Off and Lose Your Ball?

When you hit a golf ball astray and are sure you will never see it again, you will need to play another shot from the spot where you hit the initial shot, under a penalty of stroke and distance.

For instance, if you’ve hit an errant tee shot and are sure it’s lost, you will need to tee up again and hit another ball.

Instead of your first shot, you will actually be playing your third, known colloquially as ‘three off the tee.’

If you’ve hit a long, wayward drive and you think you’ve lost your ball, you will need to take a provisional shot.

This is essentially a ‘just-in-case’ shot that you will be able to continue with if you get to the spot where you think you lost your ball and can’t find it.

Golfers may also like:  What is a Shotgun Start in Golf? How it Works!

Playing a provisional saves everyone in your group (and everyone behind you) time, as you don’t need to return to the tee to play your lost shot again.

If you end up finding your ball when you or your playing partner goes to look for it, you simply pick up the provisional ball and go to the site of your original shot and commence play as normal, without penalty.

Is a Lost Ball a Two-Stroke Penalty?

Unfortunately, there’s nothing you can do to save yourself from accruing the penalty shots, which is why it’s so important to try and keep your ball in play from the very start!

When you’re playing stroke play, lost balls can be extremely damaging to your scorecard, so it’s vitally important that you do everything you can to keep your ball on the straight and narrow.

If you and your playing partners have agreed to play the new local rule that came into effect in 2019, you will still be penalized with two additional shots, but you can take a drop at the point of relief, as we explain in detail a little later on.

What Is the Maximum Time Allowed to Find a Lost Ball in Golf?

Since the new lost ball rule came into effect in 2019, the maximum time you are allowed to spend looking for a lost golf ball is three minutes. Your time starts when you or your caddy reach the point where you believe the ball to be lost and commence your search.

When you’re playing casually, there’s no need to time it, but you should in competitions.

Before 2019, you were permitted five minutes to search for a lost ball.

But as a result of slow play and backlogs on tee boxes, the USGA decided to reduce the time you are allowed to spend looking for your ball.

Golf etiquette dictates that your playing partners should assist you in looking for a lost ball, but they’re not obliged to do so.

Golfers may also like:  What is Club Up in Golf? (and Down) - Explained!

After all, you’re much more likely to find your ball when more than one person heads out into the rough to search for it!

The same is true if one of your playing partners hits a wayward shot. Instead of walking and standing by your ball in the middle of the fairway, follow them into the long grass and try and help them locate their ball.

When the three minutes are up, it’s time to play on and keep things moving.

Can You Take a Drop if You Lose a Ball?

The new local rule that was introduced in 2019 allows you to take a drop if you lose your golf ball instead of returning to the spot where you hit your initial shot. The rule was introduced to save players time is a great way to speed things up during casual rounds of golf.

If you agree with your playing partners to follow the local rule, you will need to drop a new ball within two club lengths of the fairway edge where you think your ball was lost.

You can either drop on the fairway or in the rough, providing you don’t drop the ball closer to the hole than when it was lost.

But if you’re playing in a competition, your only option is to play another shot under a penalty of stroke and distance and grin and bear it!

For the sake of the speed of the game, you should take a provisional and announce to your playing partners that that’s what you’re doing.

Then, when you get up to the point where you think your ball is, you can continue with the provisional if you can’t find your initial shot.

Do You Have to Look for a Lost Ball in Golf?

It doesn’t state anywhere in the rules that you have to look for a lost golf ball. For instance, if you’ve hooked one so far wide that you can’t get to the spot where you think it landed, there’s no need to try and look for it.

In fact, if you’re convinced that your ball is lost, giving up your right to look for it will save everyone time.

However, there’s an important caveat to mention here. While many golfers aren’t aware of this rule, you are not allowed to declare your ball lost.

So, if your playing partner decides to look for your ball for the allotted three minutes and finds it, you have no choice but to play it as it lies, regardless of where it ended up.

Golfers may also like:  What is a Draw in Golf? 7 Facts and Tips for this Shot!

While this rarely happens in practice, it’s an important rule to be aware of.

Sometimes, as you likely agree, it’s much better to lose a ball when you’re deep in the rough or the trees, as it might require more than two strokes to get it back into play!

What About a Lost Ball in A Hazard?

If you lose your ball in a lateral hazard (in water that runs parallel to your direction of play), you can drop your ball within two club lengths of where it entered the hazard, providing it’s no closer to the hole. In fact, the same is true of any other water hazard.

Balls that disappear into water hazards come with a one-stroke penalty.

So, if you hit your second shot into the water, your drop would be your fourth shot as opposed to your third.

Interestingly, the rules of golf don’t regard balls that end up in a water hazard as lost, which is why they only come with a one-shot penalty.

The same is true when you hit a shot out of bounds.

If out of bound markers demarcate the area that is in and out of play and your ball has just crossed the line, you will need to drop it back into play and take a penalty stroke.

It doesn’t matter if you can find your ball; you need to abide by the rules that govern the areas that are marked as out of bounds.

Recreational golfers often get confused when it comes to understanding the rules that govern lost balls.

But as you have learned from our article, a lost ball in golf is subject to a two-shot penalty and a return to the position where the initial shot was hit.

The only exception to this is the new local rule that came into play in 2019, which now permits casual golfers to take a drop where they think the ball was lost, saving time and speeding up play.

And if you lose your ball in a hazard, you are subject to a one-stroke penalty rather than two.

But the bottom line? Try not to lose your golf ball in the first place, as it can ruin your scorecard!