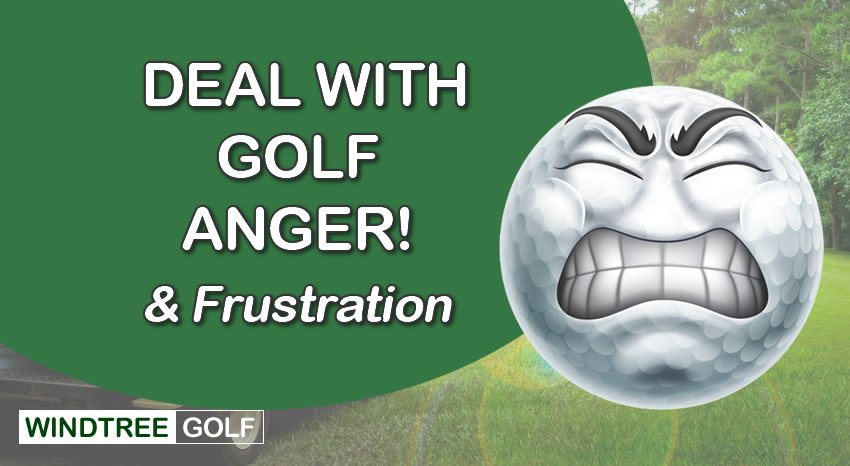 Losing any sport is frustrating. After putting in the effort to hone and develop your skills, the last thing you want to happen is to turn up on the day of the match and fail to perform.

However, when this happens in golf, it can feel like the end of the world. You’ve spent all those hours out on the range working on your swing, only to make the same mistakes over and over again. No wonder you’re angry!

In this article, we introduce you to some tips that will help you deal with your anger and frustration when it inevitably pops up on the golf course. After all, there’s no point in letting it ruin your game, as we explain below.

Why Do Golfers Get So Angry?

Golfers get so angry out on the course for a number of reasons. Primarily, golf can be extremely frustrating because one bad shot can affect your entire round, particularly if you’re playing stroke play which can lead to bouts of anger out on the course.

You might have played exceptionally well up until this point, only to play an awful shot that practically ruins your entire score.

When you’ve been out competing on the course for several hours, this can be enormously frustrating. What’s more, you’ve probably spent hours out on the range or practice course working on the various aspects of your game, only to make the same mistake time and time again.

It’s hard to express how insanely frustrating this is if you’ve never experienced it before! Also, golf is a game of extremely fine margins. For instance, you might have read a putt perfectly, only for it to deviate at the last minute to hang over the hole.

No matter how good you are at controlling your temper, an occurrence like this is enough to push anyone over the edge.

So, it’s fair to say that frustration is part and parcel of the game, but it’s really important that you don’t let it get the better of you.

How Do I Control My Anger in Golf?

The best way to control anger out on the golf course is to change your mindset. When you’re playing golf recreationally with your buddies, it’s fun to be competitive, but try not to take it overly seriously. After all, what’s the worst that can happen if you lose?

Everyone responds to anger differently, no matter when it arises. But on the golf course, if you let your anger consume you, it will ruin your round. Therefore, you need to try really hard to keep things under control while you’re out on the course.

It’s not as if your career is riding on your performance out on the golf course. For most people, getting out there and hitting some balls is meant to be an enjoyable way of passing leisure time!

So, while there’s nothing wrong with wanting to win and improve, adopt the mindset that you’re there to have fun. This will help you deal with errant shots in a slightly different way and will bring everything back into perspective.

Are Their Anger Management Golf Courses?

However, if you just want to keep a lid on things and don’t think you need help, try some breathing exercises out on the course. When you hit a bad shot, take a few seconds before reacting.

Then, instead of lashing out, take a couple of deep breaths and walk towards your next shot.

It’s also really important to remember why you’re playing golf in the first place and what it means to you. For most of us, golf is an awesome way to pass the time and actually helps us relax and unwind from the stresses of day-to-day life.

If you get too pent up out on the course, you’re not doing yourself any favors. So, as hard as it is, try and develop a strategy for getting your anger under control when you’re playing golf.

How Do I Stop Being Frustrated at Golf?

It’s nigh on impossible to stop yourself from becoming frustrated on the golf course. However, you can control how you react to that frustration. You can also think about the standards that you’re setting for yourself.

Some guys start launching clubs when they hit one bad shot out of forty, which is crazy when you think about it. Unless you’re an elite PGA golfer, then bad shots are part and parcel of the game. You can’t hit every shot like Tiger, and even he makes mistakes!

This is why it’s so important to get some perspective when you’re playing golf and to realize that you’re not an elite professional.
Celebrate the good shots and take the mishits on the chin, and you will find that your games of golf become so much more enjoyable.

How Do I Regain My Golf Enthusiasm?

To fall in love with golf again, clear your schedule and stop playing rounds of golf for a few weeks, and instead head to the practice ground or range. There’s zero pressure at the range, so you can hit as many errant shots as you like without consequence.

If you’ve been playing badly recently, don’t worry, you’re not alone! Everyone goes through bad spells, and it can be draining on your confidence. After all, sometimes you get out onto the course and can’t even seem to get the ball off the floor – it happens.

Another great idea is to try some crazy golf with your family and friends. You might also play a couple of rounds at a pitch and putt golf course to take things down a few pegs. These types of games will remind you why you like the sport and allow you to play with no pressure.

Something else you can try is playing at different golf courses from time to time.

Even if you’re a member of a club, trying new tracks and playing with different people can work wonders for your confidence and enthusiasm and is a great way to fall in love with the game once again.

Who is the Angriest Golfer on Tour?

One thing’s for sure; temper tantrums happen regularly out on the golf course, and it would be unfair to single out one player in particular. However, the likes of Tyrell Hatton, Henrik Stenson, and Pat Perez are all known to throw the dummy out of the pram on occasion.

One of the most memorable tantrums was when Sergio Garcia launched his shoe into the crowd at the 1999 Players Championship! Perhaps second only to that was when Jon Daly grabbed a fan’s camera in 2008 and launched it against a tree.

Golfers may also like:  Golf Leagues Near Me? (How to Start Your Own!)

In fairness to Daly, the fan had been taking pictures of him throughout the round, and the flash went off right in his face. Still, throwing a camera against a tree isn’t the best way to endear yourself to the galleries!

Ultimately, if you’ve ever watched or played golf, you’ve probably had or witnessed a tantrum somewhere down the line. We’re all human at the end of the day, and it’s all too easy to let our emotions get the better of us, particularly out on the golf course.

How Do You Deal with an Angry Golfer on the Course?

The best way to deal with an angry golfer is to ignore them. Nothing you can say out on the course is likely to change their attitude, so it’s better that you don’t say anything at all.

Playing with an angry golfer isn’t a pleasant experience. Sharing the course with someone who takes everything far too seriously will make everything seem less enjoyable, and it will probably make the round drag on.

Then, when you get back to the clubhouse after finishing your round, just make sure that you don’t play with them again! After all, there are lots of people who will be willing to join you on the course, so don’t waste your time with someone who lets their anger get the better of them.

Given how frustrating golf can be, it’s not surprising that many of us let our temper get the better of us from time to time on the course. But if you find yourself getting angry more often than not when you’re playing golf, it’s time to do something about it.

As we’ve explained, changing your mindset and improving your perspective on the golf course will help. You need to remember why you’re playing golf in the first place, and if things are getting too much, take a little break from the game.

Remember, you’re playing golf to enjoy it, not to replicate the best in the business. Don’t be so hard on yourself when you make mistakes, and celebrate the good shots when they happen.