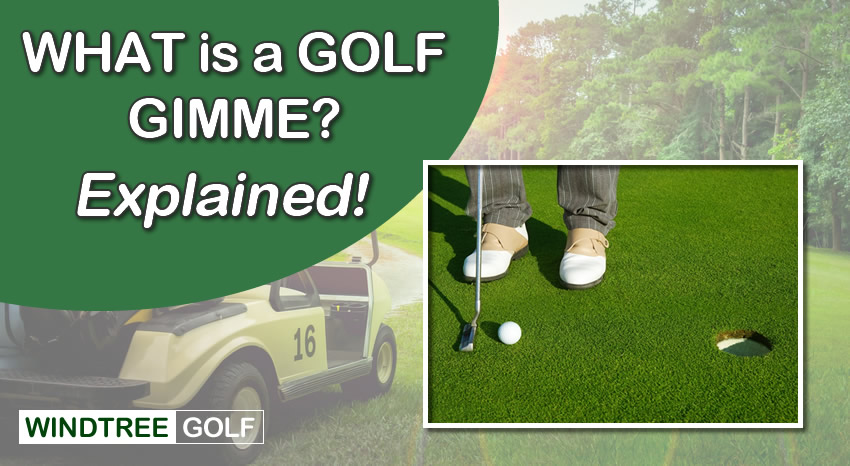 If you’ve played golf at any level, the chances are that you’ve heard of a gimme. From recreational match play at golf courses worldwide to the pinnacle of match play events on the PGA tour, players utilize gimmes to speed the game up.

A gimme in golf is a conceded shot that players deem “unmissable”. Instead of forcing a player to putt from a short distance, the game can move along at a quicker pace. Gimmes should only ever be utilized in match play events and are not permitted in stroke play competitions.

This article introduces everything you need to know about gimmes and explains some of the complex terms and unwritten conditions of the age-old tradition of conceding putts in match play golf.

What Does the Term ‘Gimme’ Mean in Golf?

The term ‘gimme’ refers to a putt deemed so close to the hole that it’s essentially unmissable. Instead of making your playing partner roll the ball into the hole, you can give them the shot (hence the term, gimme) and assume that the putt would have been made.

Although it’s a commonly followed part of the game, there isn’t mention of this quirky term in the official rules of golf, which leaves a lot of space for controversy!

We take you through some of the most prevalent issues regarding gimmes, so you can finally understand the etiquette surrounding one of golf’s most popular unwritten rules.

What is the Length of a Gimme in Golf?

A putt is considered to be a gimme if it is within 2.5ft. Some players will take the time to estimate gimmes, while others will eyeball the distance between the ball and cup and decide if it’s good. There is no official rule surrounding gimmes, the length is essentially up to players to decide.

It’s a good idea to strike up an understanding before you tee off on the first.

Whether you agree to decide on a hole-by-hole basis or grant every putt within a putter-length of the hole as a gimme, you need to be clear about your shared expectations before you start your round.

The last thing you want is to fall out with those you’re playing with over a potential gimme!

Should You Ask for a Gimme in Golf?

No, you should not ask for a gimme in golf, even if you’re playing a recreational round. A gimme has long been regarded as a gentleman’s agreement within the game of golf. Therefore, the onus is on the person who is not about to putt to offer the other player the chance to pick their ball up.

Looking at your playing partner and asking, ‘is it good?’ is poor etiquette.

A good rule of thumb is that if your ball is lying within gimme range, but your fellow players don’t say anything, you should go ahead and putt it out.

Related Article  Learning to Play Golf at 60 (or Older)? Read This!

You should never assume that a putt is a gimme, even if it’s literally hanging over the lip of the cup!

There have been numerous examples on a tour of players jumping the gun and picking the ball up for a gimme (as we explain below) before their playing partner actually gave them the putt.

If you feel the need to ask for a gimme, assume that it’s not and approach your putt as usual.

Are there Gimmes in Pro Golf?

Gimmes are a feature of the pro game in certain formats. You will never, for instance, see a gimme awarded in a major stroke play competition such as the US Masters or British Open. However, in match play tournaments such as the Ryder Cup, gimmes feature regularly.

The rules for official match play are perfectly clear in this respect.

“You may concede your opponent’s next stroke, a hole or the match, but a concession is only made when it is clearly communicated”.

What does this mean? Well, should you consider your opponent’s next putt unmissable, you can concede the stroke and allow them to pick up their ball without playing.

Not only does this speed up the pace of play, but it engenders a good spirit within the game and encourages reciprocity throughout the round.

But sometimes, gimmes cause controversy in the pro game.

For example, in the quarter-final of the 2019 WGC Matchplay, Sergio Garcia missed a putt that he assumed was a gimme.

He used the back of his putter to ram the putt wide of the hole, only for a rules official to intervene and say that Matt Kuchar couldn’t possibly have given him the putt, as he was so far away.

In short, Sergio lost the hole because he mistakenly assumed that he had a gimme.

Check out the video below, explained by Ed Mate from the CGA on the main points of this gimme controversy:

This example highlights the golden rule of gimmes, either in the professional game or during a recreational round: only pick your ball up when your competitor tells you it’s okay to do so.

Can You Refuse a Conceded Putt?

You can refuse a conceded putt in an informal recreational game amongst friends.

But why would you want to? Well, if you’re constantly being awarded 2.5ft putts, you never actually practice sinking them. This means that if you’re faced with a short, seemingly unmissable putt in a stroke play format of the game, you might struggle to make it.

However, during competitions, the rules on conceded putts are crystal clear:

So, if you’re playing in a competition and your opponent concedes a putt, you cannot decline it as stipulated in the rules.

Once conceded, the hole is considered over, and your score is marked accordingly.

Do You Count Gimme Putts?

Yes – when you’re awarded a gimme putt, you still need to mark it down as a stroke on your scorecard and count it as a shot.

For example, if you’re on the green for three and knock your putt to within 2ft, your competitor may offer you a gimme.

If this is the case, then your score would be five, as you count the putt you rolled close, as well as the gimme.

Don’t confuse a gimme with a mulligan. A mulligan is sometimes included in informal, recreational formats of the game and enables players to retake a shot that hasn’t gone well.

If you knock your tee shot out of bounds and you take a mulligan, you essentially replay your first shot and don’t need to take any penalty strokes.

While gimmes are a feature of the game at every level, mulligans are only ever part of informal practice games amongst friends.

Don’t expect to play the monthly medal at your club and be offered a mulligan when things go awry off the first tee!

Why Do Golf Gimmes Exist?

Gimmes exist in golf in order to speed up play. Instead of having to wait and line up a seemingly unmissable putt, gimmes allow you to pick your ball up and move onto the next tee, speeding the game up for everyone out on the course.

They also introduce an element of sportsmanship to the game of golf, as awarding a gimme to your competitor is an act of goodwill.

While you’re under no obligation to offer a gimme, doing so is considerate and shows that you’re motivated to play the game in good spirits.

Ultimately, it’s difficult to imagine a match play golf without gimmes, as forcing your competitor to hole every single putt would be both time-consuming and unnecessary.

While the lack of structure around the rules of gimmes allows for controversy, they’re still a fundamental part of the match play experience and make the game a better spectacle.

Golfers at every level of the game are likely to have encountered gimmes out on the course.

Whether you’re having a knock with your best friends at a municipal track or competing in the Ryder Cup at a Championship course, gimmes are a time-saving and much-appreciated aspect of the game.

The key thing with gimmes is to agree on the terms with your playing partners and competitors before your round starts to save any controversy during your match.

And equally, never pick your ball up or assume you’ve been awarded a gimme until you hear your playing partner concede. Doing so in competition will cost you penalty points and is likely to cost you the hole.