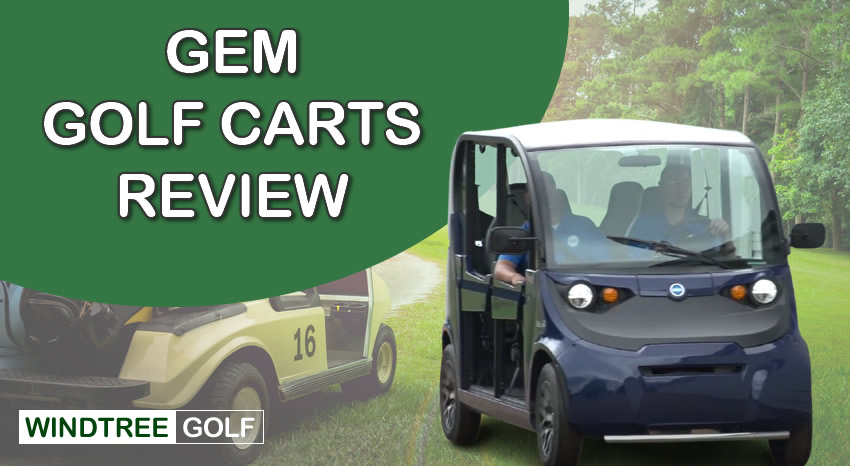 There’s something incredibly appealing about traveling around your local community in a road-legal golf cart.

Not only is it fun to drive, but you will find yourself saving thousands of dollars on fuel and tax while contributing positively to the health of the planet at the same time.

And if you’re in the market for a road-legal golf cart, you’ve almost certainly come across GEM carts from Polaris Electric Vehicles.

But what’s the deal with these electric carts? Are they any good? How much do they cost? And what safety features do they have?

We provide answers to all of these questions and more in this article and will help you decide whether a GEM golf cart is good, bad, or average.

Let’s begin with an honest assessment of this road-legal golf cart.

Are GEM Golf Carts Any Good?

GEM electric cars from Polaris are amongst the best low-speed electric vehicles available in the US. The carts are designed with a range of safety features that ensure your vehicle is road legal in 47 states. They have a top speed of 25mph, which is faster than many other popular golf cart brands.

The bottom line is that if you’re looking for a high-spec, road-legal golf cart in the US, then you will do well to find a better brand than GEM, as we introduce throughout this review guide.

What Does a GEM Car Cost?

GEM e2 golf carts retail at $10,814, which provides sufficient space for two passengers. The GEM e4 cart is $13,701, while the GEM e6 starts at $16,851, which carries four and six passengers respectively. These are the base prices for new GEM carts.

If you wish to customize your car, you can expect to pay anywhere up to $20,000 for a brand-new model.

Each of the GEM carts is street legal and comes with a range of features, including lights and indicators, safety belts, windshields and wipers, several battery packs, heat and defrost options along with premium seating with high-end upholstery.

Golfers may also like:  Golf Cart Lug Nuts Guide: (Read Before You Start!)

The fact that GEM carts are so feature-rich makes them more expensive than other popular brands such as EZGO and Club Car, and they look more like electric vehicles than golf carts.

If you’re sold on a GEM car but can’t justify the price, it’s well worth your time looking at the second-hand market in your local community.

Golf cart retailers often stock second-hand GEM carts, and you may also find used vehicles for sale on the likes of eBay, Craigslist, or even Facebook, which is a few thousand dollars cheaper than new models.

Is a GEM Car a Golf Cart?

A GEM Car is an electric vehicle, not just a golf cart. Manufactured by Polaris Electric Vehicles, it’s somewhat of a disservice to describe the GEM car as a golf cart, as they’re designed with the road in mind. They meet the criteria to be considered as Low-Speed Vehicles (LSVs).

Most importantly, GEM Cars are equipped with various safety features in addition to those already introduced that make them road-legal vehicles.

For instance, GEM vehicles are:

While you can use a GEM vehicle on the golf course, they’re much better suited to journeying around town or taking your kids to the beach at the weekend!

How Fast is a GEM Golf Cart?

Each of the GEM golf cart models is restricted to 25mph, which is what classifies them as a legal LSV in 47 states. In fairness, 25mph is fast for a golf cart, with most other models ranging somewhere between 12-20mph.

Therefore, you can expect your GEM cart to be fairly nimble, and it will get you from a to b in no time at all!

While some golf cart users look to derestrict the speed of their golf carts, there’s no need to do this with a GEM.

What’s more, if you were to alter its top speed, you would render it unsuitable for use on the road. The 25mph top speed should be more than fast enough for getting you around your local city.

Where are GEM Golf Carts Built?

GEM golf carts are manufactured in Anaheim, CA, under the Polaris brand. GEM actually stands for Global Electric Motorcars, and more than 45,000 vehicles have been sold under the brand worldwide since 1998.

You can buy a GEM cart in the confidence that you’re buying from an all-American company with a commitment to quality control and customer service.

All Polaris GEM vehicles manufactured in Anaheim come with a standard two-year warranty on all components (excluding batteries, which come with separate guarantees).

Typically, people are nervous about buying golf carts of electric vehicles from overseas, so the fact that GEM carts are manufactured in the US is of significant advantage.

How Many Volts is a GEM Car?

GEM cars are powered by a 72-watt battery system. The GEM e2, e4, and e6 are all powered by six 12-volt batteries, which are charged via an onboard charger that plugs into a standard 110-volt outlet.

When you consider the fact that most golf carts on the market are powered by either 36 or 48 volts, you can appreciate just how much juice a GEM cart has!

This is one of the aspects that makes GEM a lot more expensive than a standard cart and is one of the reasons why the brand is so popular with people looking for a road-legal electric cart.

It takes between 10-12 hours to fully charge a GEM car, which is substantially longer than the time it ordinarily takes to charge a standard golf cart and most people charge their GEM carts at night when electricity is cheaper.

You can calculate how much it will cost to charge your GEM cart by considering your local rates – Polaris states that it typically takes approximately 5kwH of power.

However you go about it, make sure you leave yourself enough time to charge it fully so you don’t get caught short when you’re out and about.

How Do You Start a GEM Golf Cart?

Starting a GEM golf cart is super easy and is similar in many respects to starting any other type of vehicle. There are 5 simple steps you need to follow to get your journey underway in a GEM golf cart.

If you would like to see how straightforward it is to start a Polaris GEM vehicle in reality, you can tune into the short clip below from the manufacturers that shows you each of the steps you need to follow to get your GEM car underway.

Polaris GEM carts are exceptionally safe, and it would be fair to describe them as one of the safest golf carts available. They are very much designed with safety in mind, and each model meets the stipulated US federal safety standard for low-speed vehicles, which is how GEM carts are classified.

Although briefly touched upon already, GEM golf carts include the following safety features:

You can rest assured that your GEM golf cart has all the safety features that you would expect from any other roadworthy electric vehicle.

So, providing you follow the manufacturer’s guidance and operate your vehicle with care, you should encounter very few problems with your GEM car from a safety perspective.

GEM Cars: A Good Alternative Golf Cart Built in the US!

American-made GEM golf carts are up there with the very best low-speed electric vehicles you will find on the market.

While they don’t quite compare to a Tesla, they certainly outperform most other electric golf carts that you may have considered purchasing!

Ultimately, if you’re looking for a road-legal, high-spec, and high-performing golf cart, then we can’t recommend GEM any more highly. But we need to finish with a caveat.

If you’re a golfer looking to use a cart exclusively out on the course, you probably don’t need to opt for a GEM. You will find that a model from Club Car, EZGO, or Yamaha will do the same job out on the course for considerably less money.