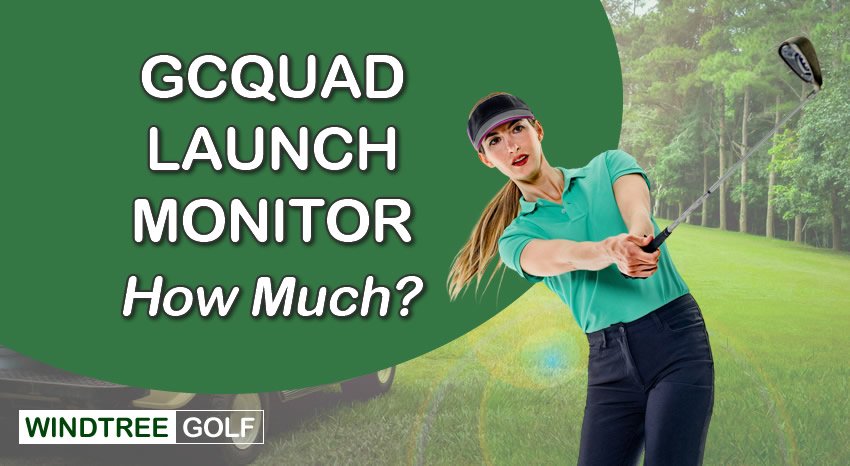 In recent years, launch monitors have become more and more prevalent as players at the top of the game have looked for opportunities to gain insight into the more delicate margins of the game.

Professionals, coaches, and golf club manufacturers use launch monitors to ascertain the data behind their clubs. There’s no doubt that they’re extremely valuable as far as game improvement is concerned.

One of the most popular launch monitors is the GCQuad, which also comes with a hefty price tag. So, to help you decide if it’s the right launch monitor for you, we explain everything you need to know about the GCQuad in this article.

What is a GCQuad?

The GCQuad is a top-of-the-range launch monitor that golfers use to measure how far they can strike the ball. It is predominantly used by golf coaches, manufacturers, and elite players to gain an insight into the acceptable margins of the game.

Checkout this video from Golf Simulator Videos YT Channel where you can see a full unboxing and initial setup:

However, the GCQuad can also help recreational golfers who are hoping to learn more about their swing dynamics and improve their ball striking.

But given the high price tag of the GCQuad, it isn’t accessible to everyone.

Below, we explain everything you need to know about the GCQuad and introduce you to some of the critical things you can expect from using it.

How Much is a GCQuad?

The GCQuad currently retails at $11,000 for the launch monitor, which highlights that it won’t be an option for all recreational golfers! You must also pay for the latest FSX software, which is currently $3,000.

Although the GCQuad is super expensive, you don’t need to pay for it in one go. You can arrange to finance the GCQuad with a third party, meaning you can make more manageable monthly repayments instead of spending such a significant amount of money upfront.

The price of the GCQuad is justified by those who use it, as it’s highly rated and regarded as one of the very best golf launch monitors that you can buy. Still, not everyone has a spare $11,000 sitting in the bank, so it’s not a purchase that all golfers can afford.

Golfers may also like:  Best Golf Simulators in Hauppauge for Fun and Practice!

How Does a GCQuad work?

The key feature of a GCQuad is the photometric camera system installed within. It takes its name from the fact that four super-speed cameras ensure the capture level of your strike is to the tune of 10,000 frames per second.

On each camera are tiny photometric sensors that regulate the flash on the camera, controlling the amount of light included in each image. Once the images have been captured, the GCQuad collates critical and highly accurate data relating to your golf swing.

You can then download the data from your GCQuad into the app that you can access on your smartphone or tablet. This lets you take your data out onto the golf course with you, ensuring you have all the information you need to improve your game management and ball striking.

How Long Will a GCQuad Last?

The battery on a GCQuad should last for around ten hours without requiring an additional charge. This is more than enough time for most golfers to take the device out onto the range or golf course, but you need to make sure it’s fully charged before using it.

The batteries within a GCQuad are replaceable lithium-ion batteries, meaning they have an exceptionally long life and perform well. Equally, you can easily replace the batteries within your GCQuad if they start showing poor performance in the future.

As far as the lifespan of the GCQuad is concerned as a device, it is built to last, and you shouldn’t encounter any issues with it. If your GCQuad is faulty and you experience some problems with its performance, you will be covered by the manufacturer’s warranty, which is two years in most instances.

What Does the GCQuad Measure?

The data that the GCQuad produces is hugely impressive, and you can gain an exceptional insight into various aspects of your game. The GCQuad measures the following:

If you upgrade your GCQuad, you can also gain insight into the following metrics:

As you can see, the data that the GCQuad provides is extremely impressive and enables you to fine-tune your game.

Given that golf is very much a game of numbers, breaking things down with a launch monitor will help you analyze your performance and make the necessary adjustments out on the range.

The GCQuad is also helpful for measuring how far you can hit the ball, and it will help you with your distances and course management. Ultimately, the GCQuad is an excellent launch monitor, and it has the potential to enhance your game significantly.

How Accurate is the GCQuad?

As you would expect from an industry-leading launch monitor, the GCQuad is incredibly accurate. The data relating to swing, impact, and ball flight is exceptionally accurate, and tests have shown that the GCQuad is comparable to the Trackman.

One of the reasons the GCQuad is so accurate is its advanced imaging technology and lightning-fast processing power. It is trusted by some of the biggest brands in the game and many of the top-performing golfers on the PGA Tour.

If you’re looking to gain an accurate insight into your ball striking and want to improve on certain aspects of your game, then there’s no doubt that the GCQuad is the ideal launch monitor for you to consider.

It is exceptionally accurate and straightforward to use. You can then access all of the data directly on your smartphone or tablet, allowing you to make the necessary improvements to your game in no time at all.

Which is Better: Trackman or GCQuad?

When it comes to the best quality launch monitors in golf, it’s a straight shoot-out between the GCQuad and Trackman. After all, they’re both trusted by the most prominent players and brands in the sport, and they’re capable of very similar things.

It’s fair to say that both launch monitors are targeted toward golf manufacturers, professionals, and coaches – in other words, people who make their money from the world of golf. This is primarily due to their expense and the acceptable margins they offer.

Golfers may also like:  Are Golf Simulators Worth It? 7 Facts You Should Know!

When it comes down to a comparison between the two, it’s difficult to say which is better. In terms of ball speed readings, people often say that the Trackman is more exact. But as far as the benefits of the broad collection of data, the GCQuad is ahead.

So, the reality is that both the GCQuad and Trackman provide exceptional insight into the game of golf and are the best of the best as far as launch monitors are concerned. Be mindful of their price tags before splashing out, as they’re both costly!

Which Pros Use GCQuad?

The GCQuad is trusted by pros at the elite level of the game, with Bryson DeChambeau and Ricky Fowler two of the most prominent users of such technology.

The fact that Bryson – also known as the scientist – relies on the GCQuad for his data speaks volumes about the quality of the launch monitor. Love him or hate him, Bryson has shown that an analytical approach to all aspects of the game of golf can result in wins at the highest level of the sport.

In addition to Tour players, many professional golf coaches turn to the GCQuad as they provide lessons to their students. After all, launch monitors provide an exceptional insight into so many vital aspects of the game that a coach can help you improve.

The fact that professionals and coaches trust the GCQuad at the top of the game highlights that this launch monitor is well worth investing in provided you can afford the price!

Undoubtedly, the GCQuad is one of the best launch monitors that money can buy. But the price of the GCQuad – starting at $11,000 – is a significant barrier for most of us!

That being said, if you can afford a GCQuad, there’s no doubt that it can help you understand your game better, and it will help you make several significant changes to the way you set up, which will see your course management improve as a result.