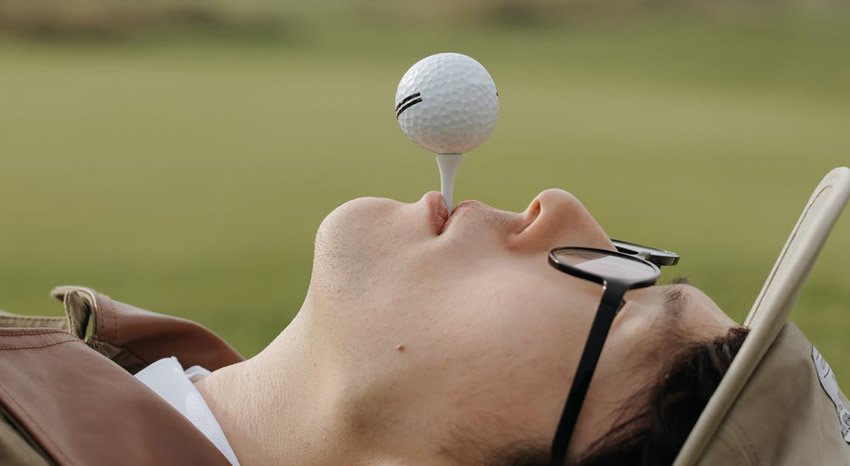 Golf ball customization can be done in many ways, and often, those that want to leave a lasting remark go for funny golf saying on balls. It might be a random thing if you think about it, but adding quotes to your beloved golf ball is a normal thing to do and a lot of online retailers nowadays sell their creations based on this premise.

They’re not printed in an over-the-top manner, yet as long as the quote or saying is readable, it is deemed successful customization.

Now, if you incorporate wit and creativity in it, you will come up with something that would last for a long time, something that you wouldn’t hate even if you repeatedly see it every once in a while. That’s the power of funny golf saying on balls.

What Are Some Memorable Golf Sayings?

Humor and golf isn’t a strange pair, and a lot of players have conceived some quotes that are either inspirational or purely for fun. They can be striking, familiar, or something that can catch you off guard. They can also be a mixture of all, making them entertaining to read, even more, if you put them in a golf ball.

Here is an example of funny golf saying from Gerard R. Ford.
“I know I am getting better at golf because I am hitting fewer spectators.”

While here is an example of an inspirational one said by Alice Cooper.
“Mistakes are part of the game. It’s how well you recover from them; that’s the mark of a great player.”

Here’s another golf saying with a bit of humor by Dean Martin.
“If you drink, don’t drive. Don’t even putt.”

Here’s some advice from P.G. Wodehouse.
“To find a man’s true character, play golf with him.”

Actor Ewan McGregor shares his experience with golf.
“I started watching golf for the first time yesterday. I’m really worried about myself. I was actually enjoying it.”

Bob Hope shares his perspective about golf in this quote.
“If you watch a game, it’s fun. If you play at it, it’s recreation. If you work at it, it’s golf.”

Lastly, here’s a quote from G.K. Chesterton that hopefully puts a smile on your face.
“I regard golf as an expensive way of playing marbles.”

Reading each quote from different persons is more than enough to form some first impressions. That’s why if you have some golf sayings yourself, or you find one that you can directly relate to, don’t be afraid to put it in your beloved golf ball. It’s a great way of showing people a tiny little piece about yourself.

What Do You Say to a Golfer for Good Luck?

To some, golfing is more than just an activity or downtime. It can get competitive sometimes, for example, tournaments hosted by golf clubs or professional golf tours that happen every once in a while.

When playing competitively, a golfer would like to have all the luck in the world, but even so, it is impossible. That’s why if you know someone who loves playing golf and is going for a big game, you should wish them good luck no matter what happens.

Related Article  Best Golf Balls that Light Up (Glow in the Dark LED!)

However, simply saying “Good luck!” is pretty stale, and there are other ways to phrase it to become much more appealing or remarkable. Here are some lines you can say for a golfer who’s eager to win.

“Don’t forget to win big!” Here’s a line that is a bit commanding; however, it would help them not forget what they’re truly aiming for, and that is to win and go home big.

“Have a good game!” This one is short, sweet, and direct to the point. Telling someone to have fun while playing will lift their mood, and hopefully, also their luck.

“Have a good round!” This line is quite a bit specific; golf is determined by 18 holes that should be played in order. Telling someone to have fun and also luck for a solid four hours is needed by anyone.

“Hit ’em straight!” An enthusiastic way of telling someone good luck before playing a long game of golf.

“Let me know how it went.” While it may sound a bit cold, this line may remind someone that you care for them, and you’re interested in knowing how the whole game went.

“Bring home the trophy!” Our last entry is a classic, and most definitely, you have already heard of it. Telling someone to bring home the trophy is also a bit commanding, but it also means that you expect something from them. However, this might cause some players pressure, so be careful on using this phrase.

Famous Scottish Golf Sayings that Stick in the Mind!

Scotland is home to many great golfers, and now and then, we see most of them winning championships and majors around the globe. Golf itself is also heavily indebted to Scotland, as the country greatly influenced the sport mostly because of its players and culture.

You can even say that Scotland is golf’s spiritual house because of its many golf courses that, until today, remain iconic mostly because of their build and layout. In this section, however, we will be talking about famous golfers and their iconic quotes. Here are some of them.

“We were all born with webbed feet and a golf club in our hand.”

Old Tom Morris is now considered a legend in Scotland and anywhere where golf is prominent. The way he impacted golf is phenomenal, and he has helped shape the game into what it is today. Some of his layouts are even being used in the Open Championship, which is a pretty big deal.

His quote is relatively superficial, but it is also striking and humorous at the same time.

“I’m a great believer that if you don’t get the ball to the hole, it won’t go in.”

Montgomerie is a beast in golf, and he is one of those golfers who are born to win and conquer. He peaked somewhere between the 1990s and the 2000s, and so far, he holds 31 wins on the European Tour and dominated the Order of the Merit 8 times. Montgomerie is also known for his participation in the Ryder Cup, which is also why he is considered one of the world’s best golfers.

Related Article  Are Vice Golf Balls Good? - (Should I Use Them?!)

Montgomerie’s quote is straightforward and clearly shows his determination and outlook when it comes to golf.

Why Do Golfers Put Dots on Their Balls?

Putting dots in golf balls is common practice to many golfers, even in a professional setup. Golf balls are identical to one another, and players often experience getting theirs mixed up with one another. It can be a hassle, especially if you value your ball so much.

If you’re not doing it, then you’re decreasing your chances of winning and having a good time while playing the game. Here are some benefits for you to consider investing in a marking tool.

When it comes to legality, clubs and other playing areas allow markers and dots to their players’ golf ball. They acknowledge its importance, and they know the limit of how it can distort a game.

Funny or humorous quotes are a must-try design for anyone looking for something new and appealing. This article has mentioned many quotes from famous individuals and even good luck lines known to some. Golf ball customization is an essential aspect of playing golf as a whole, as it allows any players to showcase what they indeed are, without even speaking any words.

Plus, funny golf sayings on balls always never fail to bring a smile to the faces of anyone who reads them, so it is also a potent social tool that can be used to start conversations and even friendships.