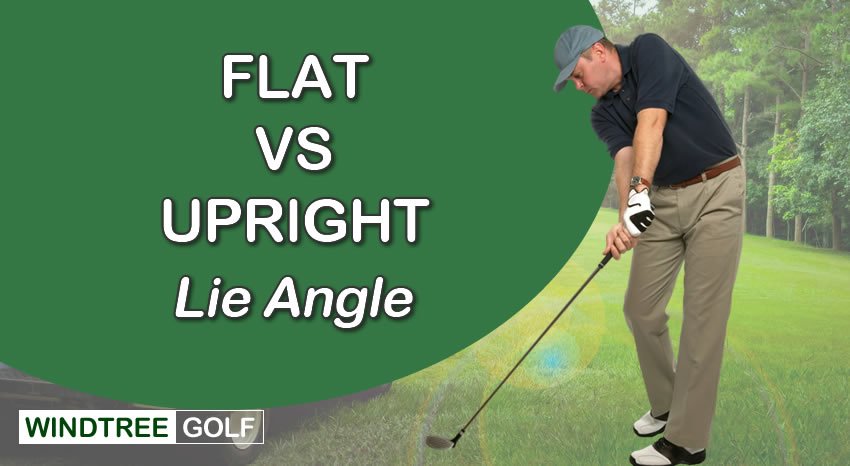 As a recreational golfer, you’re probably aware that the lie angle of your golf clubs is important. But what’s the difference between a flat and upright lie angle?

In this article, we run through everything you need to know about the lie angle of your golf clubs and why it can significantly affect how you hit the ball.

By the end of this piece, you will have all the information you need to choose the best-suited clubs for your game, which will hopefully help you keep the ball in play!

What is a Flat vs. Upright Lie Angle?

In golf, the lie angle is the measurement found between the center of the shaft and the sole of the club head, and it can come in three different configurations – flat, standard, and upright.

A flat lie angle means that the angle between the shaft and the ground is smaller, and if your swing is too flat, you’re more likely to slice the ball or at least hit it to the right.

Conversely, an upright lie angle is the opposite, and the angle between the shaft and the ground is bigger.

However, if your lie angle is too upright, you will likely hook the ball or hit many shots left.

With the basics covered, let’s take a closer look at the finer details of lie angle and why it’s such an important metric that influences your golf game.

How Does Lie Angle Affect Your Shot?

Although recreational golfers often overlook it, lie angle is important in shaping your golf shots.

If you choose a club with the wrong lie angle for your setup, you will almost certainly struggle to keep the ball in play and down the middle.

Golfers may also like:  Up and Down in Golf - What Does it Exactly Mean?

This being said, skilled golfers can control and shape their shots depending on the lie angle of their clubs.

So, it’s vital to consider the lie angle of a golf club before adding it to your bag, and you will need to think about how you’re hoping to shape your golf shots.

Who Needs a Flatter Lie Angle?

Fundamentally, players hoping to fade the ball can benefit from a flatter lie angle in golf.

Of course, skilled players typically want to shape their shots differently (utilizing draws and fades), but if your de-facto shot is a fade, a flat lie angle could help you achieve it*.

When you go for a club fitting, a professional fitter will analyze your swing and setup to determine your ideal lie angle.

As every golfer has a unique swing, it’s helpful to ask a professional fitter before opting for the ideal lie angle for your game.

Therefore, it’s fair to say that many golfers can benefit from opting for clubs with a flatter lie angle; it just depends on your setup and the actual mechanics of your swing.

How Do I Know if My Lie Angle is Too Flat?

The easiest way to tell if your lie angle is too flat is if you constantly slice the ball.

Millions of recreational golfers worldwide slice the ball, but if it’s a dominant feature of your game, it could be that you’re using clubs with a lie angle that is too flat.

Of course, a flat lie angle is not the only reason you might be slicing the ball.

You might be slicing due to a poor setup or because you’re hitting across the ball too much. Both of these are common with recreational golfers.

In reality, just one degree of lie angle can make a huge difference to how you hit the ball, so it’s essential to check if your club’s lie angle is suitable for your game.

The easiest way to do this is to take your clubs to a professional fitter and ask them to measure them.

They can then help you with the necessary adjustments if your golf clubs have a lie angle that is too flat.

What are the Pros of an Upright Lie Angle?

The main advantage of golf clubs with an upright lie angle is that it makes it easier to draw the golf ball.

Provided that you have a decent level of skill and can shape the golf ball, using clubs with an upright lie angle makes things a little bit easier when drawing the ball.

Another benefit of an upright lie angle is that it benefits taller golfers.

This is because some taller golfers often cut across the ball, particularly if they’re playing with ill-fitting golf clubs that aren’t suited to their height.

If you’re starting as a golfer, we wouldn’t recommend going for clubs with an upright or flat lie angle.

This is because you’re unlikely to have the skill and ability to shape the ball correctly, and you should focus instead on hitting the ball straight down the middle of the fairway!

So, there are some benefits to using clubs with an upright lie angle, but it’s not well suited to all players, particularly beginners.

Who Should Use an Upright Lie Angle?

There’s no hard and fast rule about who should use a golf club with an upright lie angle, but typically, this configuration is best suited to players looking to draw the golf ball more often than not.**

As mentioned, taller players might also benefit from using clubs with an upright lie angle, as it reduces the likelihood of cutting across the golf ball in the setup to try and generate sufficient power and trajectory.

When choosing the most appropriate lie angle for your game, we recommend working with a professional club fitter, as they can help you secure the ideal clubs for your setup.

Lie angle isn’t something you should take a chance with, so be sure you get it right when choosing a new set of golf clubs to play with this season.

Golfers may also like:  Tathata Golf Reviews - Is this Training Course Legit?

What Happens if the Lie Angle is Too Upright?

Playing a golf club with an upright lie angle makes it easier to draw the ball. However, if the lie angle on the club is too upright for your setup, it’s likely to result in a hook.

As you will probably be aware, there’s a huge difference between hooking and drawing the golf ball!***

A hook is an ugly shot that swerves way too far to the left, often causing the ball to fly out of bounds.

Naturally, this is a shot you must avoid in most instances out on the golf course, which is why it’s important not to play with clubs with a lie angle that is too upright.

But if you can control the ball well and know that an upright lie angle is advantageous to your setup, it can help you draw the golf ball well out on the course.

Regarding ball flight, the lie angle of your clubs will affect the direction that the ball will fly, as opposed to height.

Of course, hooks and slices don’t fly as far as fades and draws, but you should be more concerned about the direction rather than the trajectory of your shots when considering lie angle.

As we’ve explained throughout this article, the lie angle of a golf club is extremely important, but recreational golfers often overlook it.

But if you want to shape the ball nicely and keep it in play more often than not, you need to think about the lie angle of a golf club.

Playing with the right clubs can hugely impact your game, so it’s worth thinking about.

Lie angle is a hugely important metric for golf clubs, so don’t overlook it.

A lie angle of just one degree can make a huge difference to how you hit and shape the ball, highlighting the fine margins of golf.

The best way to ensure that you’re using clubs with an appropriate lie angle is to schedule an appointment with a professional club fitter, as they’re perfectly positioned to help you choose the ideal golf clubs for your setup this season.