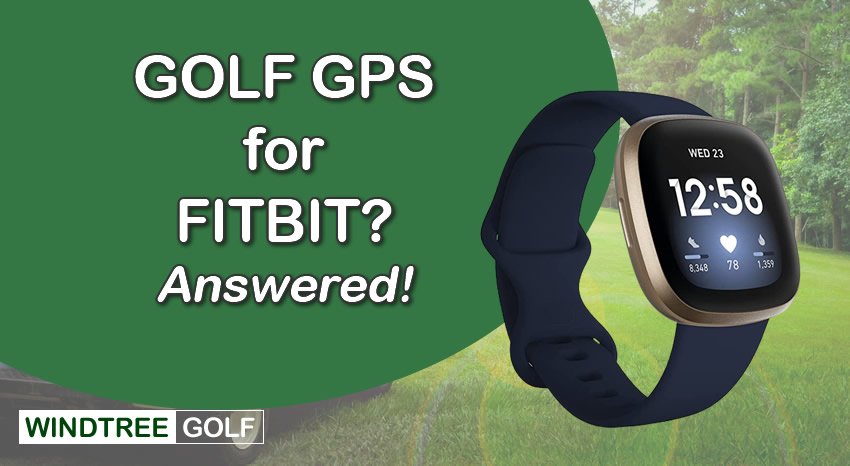 Fitbits have become extremely popular in recent times, as people are looking for ways to track their exercise and meet their fitness goals. But can you use a Fitbit as a golf GPS?

The truth is that you can use a specific Fitbit device on the golf course, but not all Fitbit models are compatible with the necessary golf software.

So, with that in mind, this article takes a look at everything you need to know about using your Fitbit as a golf GPS and explains whether or not it’s a good option for recreational golfers.

Is there a Fitbit for Golf?

These applications provide you with access to advanced GPS, which is accessible on more than 36,000 golf courses in different parts of the world. You can check distances and hole locations, which will help you significantly when it comes to course management.

Given the cost of rangefinders and other golf GPS technologies, the fact that you can use the Fitbit Ionic on the golf course is a huge bonus and saves you from investing in a new device.

To help you get the most out of your Fitbit on the golf course, we take a closer look at some of the things you need to know as you set your device up.

How Do You Use Fitbit for Golf?

Provided you have a compatible Fitbit device, the first thing you need to do is download the Golf GPS app. Once downloaded, sync your app and Fitbit before setting up your local course. You can then click “send to the tracker,” which will help your Fitbit find the necessary data.

Although the vast majority of people don’t experience any issues with Fitbit for golf, it’s important to keep your device updated and ensure you’re always using the latest iteration of iOS or Android to support the feature.

Also, be mindful that the golf app itself regularly updates, so you will need to check that you’re operating the latest iteration of the software for it to work.

Once your app and Fitbit are synced, you can go ahead and use the GPS feature on your chosen course. It will provide you with accurate data regarding your distances and help you plan your club selection.

Can I Use My Fitbit as a Golf GPS?

You can use the Fitbit Ionic as a golf GPS, but you will need to download the required golf GPS app for your iOS or Android device, as mentioned above. This is because Fitbit doesn’t have a golf GPS function built into its core design.

Using a GPS will significantly improve the way you play the game, as it will provide you with accurate distances that you can use to select the right club and play the correct shot. Without GPS, you’re reliant on your own calculations, which are often wide of the mark!

The fact that the Fitbit Ionic can be used as a golf GPS with the right app is super helpful to know, as it means you don’t necessarily need to buy a brand-new device to use exclusively as a golf rangefinder.

But in addition to the Ionic, are there any other Fitbit models that have GPS technology? Let’s find out.

Which Fitbits have Built-in GPS?

They all utilize GPS to record and track your position when you’re out hiking, running, or riding, which enables you to keep tabs on your exercise goals.

However, presently the Ionic is the only Fitbit device that is compatible with the Golf applications that you can download on iOS or Android.

So, if you’re planning to invest in a Fitbit to track your exercise, but you also want to use it on the golf course, we would recommend the Ionic above all other brands.

Golfers may also like:  Golf Buddy Touchscreen Watch Review 2022 (is it Worth it?)

How Does Fitbit Measure Golf?

Standard Fitbits have a built-in exercise option for golf, which allows you to track the number of steps that you take out on the golf course. Essentially, this is just like tracking any other form of exercise on the Fitbit app.

In regards to GPS, your Fitbit works in sync with a golf GPS app, which enables you to measure the specific distances between your location and the hole. As already mentioned, when you download the app and sync your device, you can use your Fitbit Ionic on more than 36,000 golf courses around the world.

In this respect, it works just like any other GPS golf tracker and saves you from buying a GPS rangefinder that is exclusively for use out on the golf course.

This is a bonus as you can simultaneously measure your steps and exercise while you’re calculating your distances out on the golf course.

How Accurate is Fitbit GPS?

The golf app on the Fitbit Ionic is very accurate. Provided you can access your chosen golf course, the distances presented on the Fitbit GPS are as accurate as you would expect from any golf GPS software.

One of the drawbacks that people have found with using Fitbit as a GPS is that the golf app doesn’t always sync automatically with the device. This means that you may have to regularly update and re-sync your device before heading out on the golf course.

Although not the end of the world, it’s a bit more hassle than using a purpose-built GPS rangefinder, even though you’re able to save yourself some money by using your Fitbit.

Ultimately, it’s fair to say that the Fitbit GPS is accurate, but it’s not without its drawbacks, which is why it’s worth exploring other options.

What about Fitbit as a Golf GPS Rangefinder?

You can use a Fitbit Ionic and the associated golf app to get a measure of your distances out on the course. But Fitbit has never promoted itself as a golf GPS rangefinder brand, so it’s important to recognize this distinction.

Purpose-built golf rangefinders either use GPS or laser, depending on the model that you opt for. As they’re built specifically for this purpose, the reads they give you are super accurate, and you don’t need to worry about compatibility and syncing issues.

Golfers may also like:  Shot Scope Golf GPS Tracking (Does it Actually Work?)

That being said, if you already have a Fitbit Ionic, there’s no reason why you shouldn’t download the golf GPS app and use the device while you’re out on the golf course.

But if you’re planning to buy a GPS rangefinder to use exclusively out on the course, there are better options than the Fitbit Ionic, as we explain below.

Is there a Better Watch for Golf GPS Tracking?

There are lots of great options when it comes to golf GPS tracking watches. Some of the best options include:

While the Fitbit Ionic can work as a golf GPS, we’d recommend investing in one of the above three options if you’re in the market for a new watch, as they get the job done and will help you improve your game out on the golf course.

Although a Fitbit is not specifically designed for use as a golf GPS, you can utilize the golf GPS app that is compatible with Fitbit Ionic.

That being said, there are better options out there if you’re hoping to improve the accuracy of your game with a rangefinder, as we’ve explained above.

So, while you can use a specific Fitbit as a golf GPS, it’s not the best option available to you if you’re in the market for a new rangefinder.