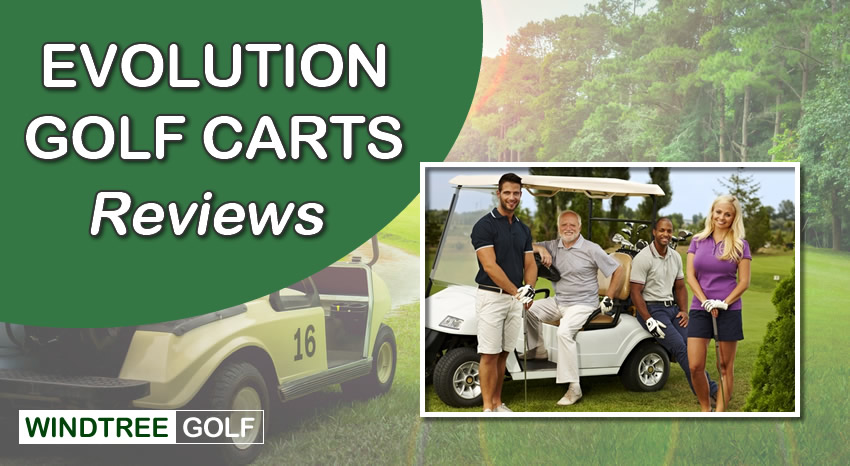 If you’re in the market for a new or used golf cart, you’ve perhaps come across Evolution carts and are wondering how they compare to the likes of EZ-Go, Club Car, and Yamaha.

After enjoying success in Asia-Pacific markets, Evolution carts have become prevalent in the US, and they are assembled in Chino, California.

Packed with features, boasting a modern design, and available for a similar price as some of the most popular golf cart brands, Evolution electric carts are worthy of your consideration.

To help you in your search for a new or used golf cart, we introduce everything you need to know about Evolution carts, so you can decide if they’re a good fit for you.

Evolution is a trusted supplier of top-of-the-range golf carts based in California. They have an excellent reputation for developing state-of-the-art golf carts that rival some of the biggest names in the industry.

Their carts are attractive and well-built and can be used on and off the golf course for various purposes.

How Much do Evolution Golf Carts Cost?

As with all carts, you can purchase a used Evolution golf cart for slightly less, with prices still in excess of $8,000 for Evolution’s popular models from selected dealers.

From a cost standpoint, Evolution golf carts are amongst the most expensive manufacturers, with their retail prices comparable to new models from industry leaders EZ-Go and Yamaha.

Where are Evolution Golf Carts Made?

Many of the component parts that comprise Evolution golf carts are manufactured in Xinyang, China, but the carts themselves are assembled in Chino, California.

Evolution’s plastic and metal components are manufactured by HDK Electrical, the company that Evolution vehicles evolved from after experiencing initial success in Asia-Pacific markets.

Some of the other components of Evolution carts are designed in the US, including Curtis Instruments speed controllers and Lester Electrical onboard charging systems.

It’s accurate to say, then, that Evolution carts are partially manufactured in Asia and predominantly assembled in the US.

While that might sound a little confusing, Evolution Electric Vehicles is the brand associated with the popular carts, and they have their US headquarters in Corona, California.

After huge success in Asia-Pacific markets, Evolution golf carts are becoming increasingly popular in the US and are gaining a stellar reputation for their high quality and overall performance.

Related Article  How Do I Know if My Golf Cart Solenoid is Bad?

How Fast is an Evolution Golf Cart?

Many electric carts run top speeds of up to 20mph, while speed limits are often set by golf courses in the hope that golfers don’t cause accidents by traveling too fast out on the course!

Given their 25mph max speed, Evolution golf carts are a great option if you’re planning to use your golf cart away from the golf course, as they’re capable of holding a decent speed out on the road.

Although electric golf carts require less maintenance than gas-powered carts, there are some common problems that may occasionally cause them to breakdown, including:

Generally speaking, if you buy a new Evolution golf cart, you don’t need to worry too much about the issues mentioned above, as you’re only likely to encounter them as your cart experiences wear and tear out on the golf course.

How Do You Make an Evolution Golf Cart Go Faster?

The best way to make an Evolution golf cart go even faster is to replace its existing motor with a high-speed or torque upgraded electric motor. This won’t be cheap, and parts and labor are likely to cost in excess of $1000.

A slightly cheaper alternative would be to replace your speed control, which tends to increase the speed of most electric carts to around 20mph.

But given that Evolution carts already have a top speed of 25mph, this might not be viable.

If you’re not overly keen to perform costly upgrades or renovate your cart, the following simple 3 tips will help to increase the speed of your Evolution cart:

While most people would consider 25mph to be more than fast enough for a golf cart, you can utilize the simple tips above to increase the speed of your Evolution golf cart.

Are There Any Evolution Golf Cart Owners Forums?

Yes, there are at least 4 internet-based forums that are focused on Evolution golf carts for their owners.

Before committing to buying an Evolution golf cart, you might understandably want to ask current owners questions about their carts and find out what has been said about the brand.

The good news is that there are several established forums on the internet, where you can find a great deal of information about Evolution golf carts, including:

Hopefully, the above forums will answer some of the questions that you have about Evolution golf carts before you opt to buy one.

Alternatively, you can view the FAQ page on Evolution’s website if you can’t find what you’re looking for on the forums.

Evolution golf carts are becoming increasingly popular in recent times, as golfers are thrilled with the modern design and additional speed when compared to other electric carts on the market.

All Evolution golf carts are assembled in California, and there are several models and sizes for you to choose from.

If you have any reservations about purchasing an Evolution golf cart, you can always scour the forums listed above to bolster your knowledge and ensure the cart has all the features that you’re hoping for.

Whether used on the course or on the road, Evolution is a brand that is certainly worth your consideration if you’re in the market for a new or used golf cart.