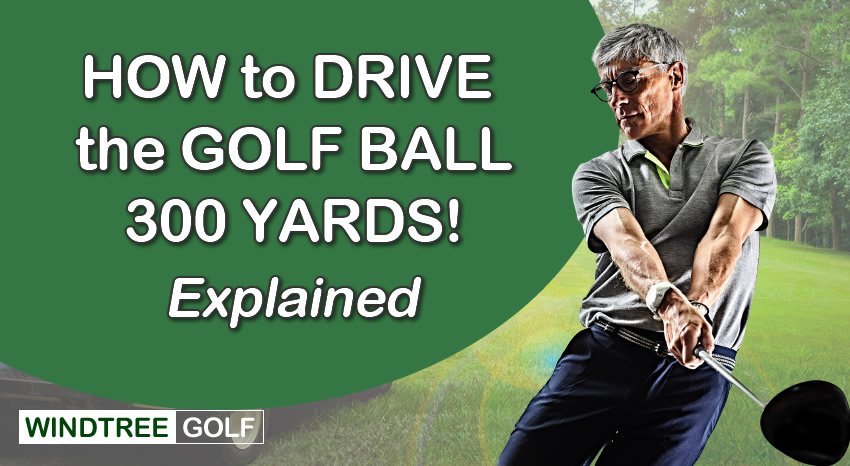 Few things are as enjoyable as teeing it up and ripping the ball out on the range with your driver. While many recreational golfers are happy with drives past the 225-yard mark, many of us are a little more ambitious.

After all, if you’ve ever tuned into a PGA Tour event on the TV, you will notice that most players regularly hit the ball 300 yards and further. But is this really a possibility for recreational golfers?

In this article, we introduce some tips that will help you maximize your driving potential and hopefully help you hit the ball further than 300 yards from the tee.

Driving the ball more than 300 yards certainly is not easy for most golfers, but it’s something that many golfers aspire to. If you can regularly drive the ball 300+ yards down the middle, you will put yourself in good positions out on the golf course.

For more information on smashing the ball over 300 yards, checkout the video below from Top Speed Golf (Clay Ballard):

They also benefit from the best equipment, which is another important consideration. If you’re using an old driver from a few years ago, you won’t be able to benefit from the latest in golf club technology, which is likely to cost you some yards on the tee.

So, if you’re hoping to consistently drive the golf ball more than 300 yards, you need to work on the speed of your swing and ensure you have the very best equipment to help you achieve your ambitious target.

Yes, any drive that lands on the fairway more than 300 yards away from the tee is an exceptional golf shot. Normally, if you keep the ball in play and hit it further than 300 yards, you will be in with a great chance of making a birdie or better on the hole that you’re playing.

Golfers may also like:  What is a Tee Time in Golf? 9 Facts You Should Know!

Most recreational golfers aspire to drive the ball between 220 and 250 yards, which is also impressive. This is usually enough to leave yourself with a mid-short iron into the green on par 4s and will set you up nicely for a second shot on par 5s, too.

So, if you can hit the ball more than 300 yards regularly, you’re probably outdriving your playing partners by at least 50 yards! Still, you need to make sure that you combine your length of the tee with accuracy, as there’s no point in being able to drive 300 yards if you knock it into the woods.

This is where driving the ball such a long-distance becomes so difficult because when you’re executing such high swing speeds, it’s much more difficult to control your shot. This is why the best players in the world can hit the ball further, as we explain below.

Can an Average Golfer Hit a 300-Yard Drive?

Some average golfers might be able to hit a 300-yard drive from time to time, but it’s not particularly common.

Perhaps you’re someone who has nailed your long game but really struggles with chipping and putting, for instance.

This might be a scenario in which you regularly hit drives around the 300 mark but can’t capitalize on your distance because you haven’t worked on your short game enough.

This is the hallmark of many recreational players, who typically have certain aspects of their game that are much better than others.

That being said, it’s not particularly common to see an average golfer hit the ball consistently further than 300 yards.

We would say that most recreational players who are capable of such distances off the tee are likely to play off low handicaps, perhaps in single digits.

Why Do I Drive the Ball Shorter than I Would Like?

Driving is one of the hardest parts of golf, so there could be a number of reasons why you’re not achieving the distances that you would like off the tee. The first and most common reason is that you don’t have a very fast swing speed.

As mentioned, swing speed is one of the biggest determinants of ball striking off the tee, and the higher your swing speed, the further you are likely to drive the ball. But unfortunately, you can’t just increase your swing speed overnight, and it’s something you need to work on with time.

Another reason why many recreational golfers hit shorter drives than they would like is that they regularly slice or hook the ball. When you don’t make a full connection with your driver, it can cause the ball to veer left or right, which significantly reduces how far you can hit it.

You should also think about the equipment that you’re using. If you have an old driver, it won’t be equipped with the latest technology.

While we’re not encouraging you to just go out and buy a brand new driver, you will find that golf technology has advanced significantly in recent years, so it could be time to upgrade to a newer model if you want to go the extra distance from the tee.

How Strong Do You Need to Be to Drive 300 Yards?

If you want to hit a driver more than 300 yards, you will need to maintain a swing speed of approximately 110 mph. This is fast by any standard and is not particularly easy for most recreational golfers to maintain.

The best way to work on your swing speed is to invest in a Trackman or other monitoring technology. If you don’t want to buy one, you could always schedule some lessons with a golf coach who is able to provide you with an insight into this data.

Lots of PGA Tour pros work on their upper body and core strength as they seek to hit the ball as far as possible off the tee, so it undoubtedly helps to spend some time in the gym. However, swing speed isn’t just about your body strength, as there’s a lot more to it than that.

But if you’re in good shape and have a good golf coach to work with, there’s no reason why you can’t improve your swing speed over time and hopefully achieve your distance targets off the tee.

Tips to Hit Your Driver for Over 300 Yards?

As explained, hitting your driver more than 300 yards isn’t easy, and most recreational golfers will struggle to do it. So, with that in mind, here are some top tips that will help you increase your distance off the tee:

Golfers may also like:  Measure Putter Length Correctly! (in 2 STEPS!)

As is the case with every sport, the more you work on your golf game, the better you will become. This should also increase your chances of being able to hit the ball more than 300 yards off the tee, so be sure to practice as much as you can!

What Pros Drive the Ball the Longest?

When you mention the longest drivers on the PGA Tour, people automatically think about Bryson DeChambeau and his scientific approach to the game. After all, Bryson has entered longest drive competitions throughout his career and has even worked with Cobra to develop the latest tech.

But in reality, Bryson isn’t quite where he wants to be at the top of the tree right now. Here are the top five golfers in terms of driving distance on the PGA Tour in 2022:

So, Cameron Champ is currently the longest player on the PGA Tour, with drives that regularly exceed his 323-yard average! When Bryson returns to fitness and form later this year, it will be interesting to see the numbers he posts, and he’s likely to make the list.

Driving the golf ball is one of the most enjoyable aspects of the game, but it’s far from straightforward. While most recreational golfers are happy with drives in the 220 – 250 yard bracket, professional players want to smash the ball 300+ yards off the tee.

And while some recreational players can certainly hit 300-yard drives, consistency is perhaps the biggest challenge, as it’s not something that they can necessarily maintain throughout a golf season.