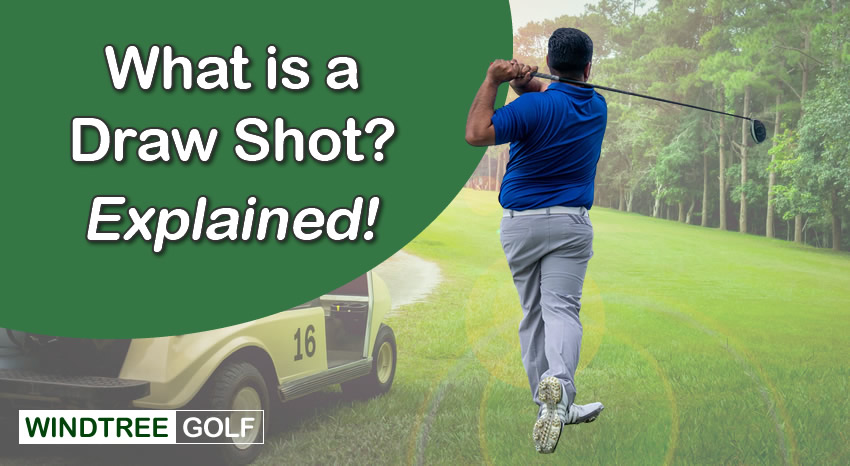 The draw shot is one of the most sought-after skills in the game of golf.

Professionals master them due to the utility they provide, experienced golfers spend their golf career attempting to perfect them and new golfers struggle to keep from turning their draw shots into a nasty hook.

A draw shot starts off to the right of the player’s target and comes back toward the target line while still flying in the air.

The golf ball experiences a large amount of forward spin and helps propel the ball farther once it hits the ground and begins moving forward.

This sounds great in theory but is a little more difficult to master in practice.

Below we will discuss what exactly a draw shot is, what kind of swing is needed to perform them as well as the pros and cons between draws and fades.

What Does the Term Draw Mean in Golf?

There are a large number of factors that contribute to hitting a golf shot but when executed correctly it will cause the ball to travel right with a negative spin that turns the ball back left directly towards the target.

Draws, and their close cousin, fades are the most controllable ball flights.

A draw shot is a powerful skill to have in your golf arsenal because it allows you to overcome normal golfing challenges such as dog-legged courses, course obstacles and strong winds.

What Causes a Draw in Golf?

A draw is caused by a square clubface at impact with an inside swing path. This sounds easy enough but either one of those two things can take years for some golfers to master.

Some players find that they naturally hit a draw while others have to practice the shot.

It is estimated that fifteen percent of all golfers hit a natural draw, which leaves a whole lot of us left that have to work at it.

Golfers may also like:  How to Break 100 in Golf for Better Results!

When the clubface and swing path moves in the same direction, the odds are much higher that you will hit the golf ball in the center of the clubface.

Professionals also tend to align their body towards the right of the target, this helps increase the right to left ball flight.

Clubface position and swing path are the two most important factors in causing a draw but they are not the only components.

You also need to master a strong grip and full arm rotation. Ball position in your stance is also important however this varies from player to player.

Conventional wisdom says that the further back the ball is in your setup, the better chance you have of creating a draw.

How Do You Hit a Draw in Golf?

You hit a draw by squaring the clubface at impact and using an inside swing path. A draw begins with a proper setup like almost every other golf shot. The goal is to aim your body well right of the target.

Let’s checkout a great YouTube video on how to master the draw golf shot:

A square clubface and inside-to-out swing path are important pieces to the draw shot puzzle but they are not the only factors.

Other ingredients to a draw include standing further away from your ball than normal, holding your club with a strong grip as well as focusing on full arm and body rotation.

Skilled players can coax draw shots by both irons, hybrids, and woods.

Most new golfers will find that they will hit draws more often while using irons. Irons make it more likely to hit down on the ball and lead to a draw shot.

Tee shots made with hybrids, fairway woods, and drivers use the opposite strategy to hit a draw shot.

You must hit the ball in an upswing to launch the ball high in the air and introduce the spin needed to curve the ball back left to your target.

Is a Draw Shot Good in Golf?

A draw is good in golf when you want to gain the proper position on the fairway or land the ball at a desired spot on the green. It is one of the most valuable tools in any golf bag.

Even though it is one of the best golf shots a player can master, not many players can say they hit a draw shot on a consistent basis.

Professional golfers can use a draw shot to place a golf ball exactly where they need it on a fairway.

The draw isn’t typically used to attack the green because it promotes a high amount of spin on the ball.

A high amount of forward spin comes in handy for all levels of players when they are aiming for and hitting fairways on their tee shots.

A true draw helps gain a considerable amount of extra distance compared to a ball that has more of a hook or slice pattern.

The forward spin causes the ball to get a jump forward when it first hits the ground.

This may not matter much if the ball lands in a hazard or long rough but makes a huge difference when striking a fairway.

Golfers that master a draw can expect to gain an extra ten to fifteen yards of extra yardage.

What is the Difference Between a Hook and a Draw in Golf?

The difference between a hook and a draw is that a draw is a controlled shot and a hook is generally unintended.

Hook shots can be used by talented players in very specific situations but are normally the consequence of a poor swing.

A draw is a golf shot that causes the ball to start off the right of the player’s target and turn back slightly left to be in line with the original target.

Most players only refer to a hook or a draw when it comes to shaping the ball from right to left, but there is a third option called a pull.

All three shots result in the ball moving from right to left but they happen in extremely different ways. The first, and worst of the three options, is a hook shot.

A hook shot starts off the right of the target and then turns rapidly away from the target flying far to the left-hand side.

This most often results in a lost ball or a ball that travels far out of bounds.

Golfers may also like:  What is a Tight Lie in Golf? Explained with Video!

A draw shot starts off the right of the target and then gently turns itself back over towards the left to be back in line with the target.

Draw shots are highly sought after by all golfers, although not always achievable.

Hook shots are a universal experience that players of all levels share.

Is it Better to Hit a Draw or Fade?

It is best to have the ability to hit both draws and fades. Both shots have varied applications and can benefit players at different times. Draws and fades are controlled shots that promote accuracy and high forward ball spin rate.

Both shots end up curving back (either left or right) to be in line with the target. Golf course holes tend to place the green to the right or left of the tee box location.

Professional golfers have the ability to hit either a draw or fade on demand and choose the best option for the scenario they are in.

These shots are most often used on the tee box when contending with hazards on the left and right.

Draw and fade shots are also used in the fairway with irons and hybrids. This is typically seen on par fives or long par fours.

The high forward ball spin rate produces an extra ten to fifteen yards of distance once it hits the ground. This can be problematic when approaching greens or when a green must be struck.

Can I Hit a Draw Shot?

Professional players make shaping shots like draws look easy on television. They have mastered one of the most sought-after golf shots in the sport.

Draws are a simple shot in theory but can be a little more difficult in practice.

The shot starts off the right of the target and subtly draws itself back in line. It is caused by a strong grip, a square clubface, and controlled inside to outside golf swing.

Although only fifteen percent of players naturally have a strong grip and swing plane to promote a draw, it is achievable by practicing.

Clubface position and swing path are important factors in a draw shot but are not the only parts.

Practicing a strong grip and full-body rotation when striking the ball will help you achieve a draw shot more often.