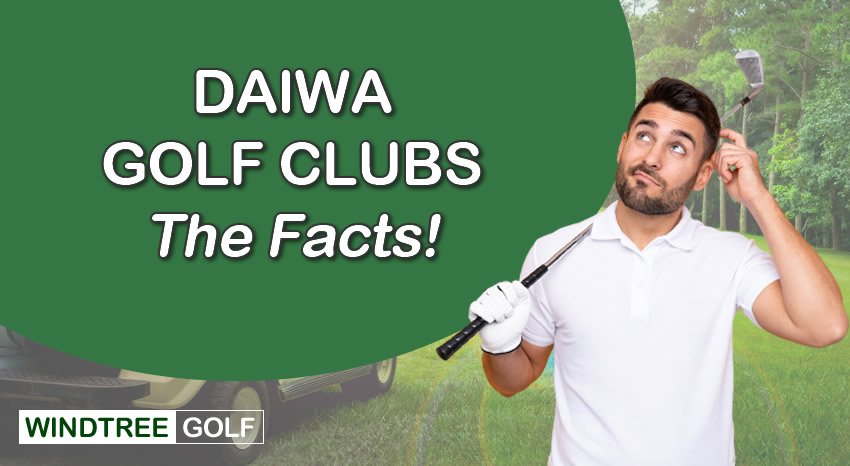 Throughout the past fifty years or so, lots of brands have manufactured golf equipment and accessories. The Japanese company Daiwa is one such brand, even though it’s best known for its production of fishing rods and reels.

Although Daiwa hasn’t manufactured golf clubs for several years, you can still pick up used Daiwa clubs online, and they’re available for a great price.

Below, we explain everything you need to know about Daiwa golf clubs and provide you with some top tips on how best to find yourself a bargain.

What is Daiwa Golf?

Daiwa is a brand that is best known for its provision of a broad range of high-tech fishing equipment, but it has also manufactured golf equipment and various other accessories in the past.

The company started in 1955 and became a global leader in fishing equipment in the decades that followed. However, it wasn’t until 1972 that Daiwa launched its first line in golf, which saw their clubs become a market leader in the recreational golf market.

By the 1990s, Daiwa was one of the most popular golf manufacturers, and Daiwa clubs were used by amateurs and professionals alike. In the mid-nineties, Daiwa pros included Dan Forsman and Ian Baker-Finch, as the brand was represented on the PGA Tour.

Since then, Daiwa has fallen off the radar a little and has been replaced by other brands. Still, it’s possible to pick up a set of Daiwa clubs today, and we explain everything you need to know about them below.

Daiwa no longer manufactures golf clubs. The company ceased producing golf equipment after a corporate shake-up in the early 2010s. Daiwa Golf’s parent company, Daiwa Seiko Corporation – rebranded as Globeride Inc, and it saw an end of the company’s foray into the golf market.

Today, Daiwa still produces fishing rods, reels, and other merchandise and is prominent at the professional level of the sport.

If you find Daiwa golf clubs for sale online, they’re almost certainly used. This is because Daiwa hasn’t manufactured new clubs for the best part of a decade, so those that you can buy online today have probably seen better days!

Still, if you see Daiwa clubs online for sale at a reasonable price and you want to bag yourself a bargain, there’s no reason not to go for them, particularly if you’re just starting out as a golfer.

Are Daiwa Golf Clubs Any Good?

Daiwa golf clubs were regarded as an excellent option for recreational golfers and professional players alike. Daiwa’s heyday was in the mid-nineties when several pros trusted the brand on the PGA Tour.

Daiwa’s latest release came in 2008 when they launched their OnOff line of golf equipment. These clubs were incredibly popular with the recreational market in particular, and they were voted as 2008 irons of the year by Golf Digest in Japan.

With graphite shafts and triple-cavity construction, Daiwa’s latest irons are easy to hit and extremely forgiving, making them an excellent option for beginner golfers and those seeking game improvement clubs.

So, even though you can’t find new Daiwa clubs for sale today, if you do find some OnOff Daiwa irons on a site like Second Swing or eBay, you can rest assured that they’re built to high specifications and are perfectly suited to recreational golfers.

Where Are Daiwa Golf Clubs Made?

Daiwa manufactured its golf clubs in Japan, as the company is headquartered in Asia. Daiwa was particularly popular in Japan and in other Asian markets, even though it didn’t compete with the biggest brands in the US and Europe.

Today, brands such as Honma and Mizuno dominate the Japanese and Asian markets and have replaced Daiwa in many respects. Japanese clubs are favored for their intricate design and master craftsmanship.

As a huge player in the fishing industry, Daiwa still manufactures many of its equipment in Japan, but they also distribute fishing equipment in the US and Europe.

So, if you find an affordably priced set of Daiwa irons, they were probably manufactured in Japan in the late 1990s or early 2000s, before the company ceased the production of its popular golfing range.

How Much are Daiwa Golf Clubs?

Currently, you can find used Daiwa irons on sale for less than $100 on eBay, which is a decent option if you’re looking for an affordable set of irons when you’re just starting out on the course.

As Daiwa no longer manufactures and retails golf clubs, it’s difficult to confirm how much you’re likely to pay for a full set of used clubs.

The price you see Daiwa clubs retailed at will largely depend upon their condition, which is an important thing to consider before buying any used golf clubs.

You can also scour the likes of Craigslist and the Facebook marketplace to see if you can find Daiwa clubs at a similar price.

However, when you’re looking for cheap, second-hand clubs that are no longer manufactured, it’s much better to broaden your horizons and not focus too much on the brand.

Given that Daiwa clubs haven’t been made since 2008, you might struggle to find the clubs that you’re looking for, meaning it’s a better idea to increase your search parameters.

Where Can You Currently Buy Daiwa Golf Clubs?

The best place to buy Daiwa golf clubs is on a second-hand marketplace like eBay. If you’re searching for a bargain, eBay is one of the best places to go for used golf clubs, as people typically offer up clubs for a great price.

Alternatively, you can search through the classifieds on Craigslist, which is an excellent way to see if Daiwa golf clubs are available in your local area.

The same is true for the Facebook marketplace, where you might even find Daiwa clubs available for free if you’re willing to collect them from the seller.

You might also find Daiwa golf clubs available on websites like Second Swing and other online retailers. However, online retailers are a little bit hit and miss when it comes to stocking certain brands, so you might not find Daiwa irons specifically.

If you’re looking for a new set of Japanese golf clubs, it’s best to check out brands like Mizuno and Honma, as they’re prevalent in many online and brick-and-mortar golf stores today.

What About Daiwa Golf Bags?

Daiwa ceased production of its golf bags and various other accessories when it put an end to its line of golf clubs. So, today, any Daiwa golf bag that you find for sale online is likely to be used.

While buying a used golf bag is perfectly fine, it’s important to check its condition before agreeing to a sale. The last thing you want is to purchase a golf bag that is filled with holes or rips or is damaged in any other way.

But given that new golf bags are often expensive, looking on a marketplace like eBay, Craigslist, or Facebook is a great way to grab yourself a bargain if you’re not concerned about choosing a brand that is no longer active.

Most Daiwa bags are carry bags, meaning they’re relatively lightweight, and you don’t need to drive a golf cart to take your clubs out onto the range.

Although once a prominent golf brand with professional and amateur golfers alike, Daiwa today is exclusively a fishing brand known for its rods and reels.

Still, if you can find a set of Daiwa irons online and they’re in good condition, there’s absolutely no reason not to add them to your bag if you’re looking for a bargain.

When you’re just starting out, you might not want to spend a fortune on the latest clubs from the biggest brands, so picking up a set of used Daiwa golf clubs is a decent alternative.