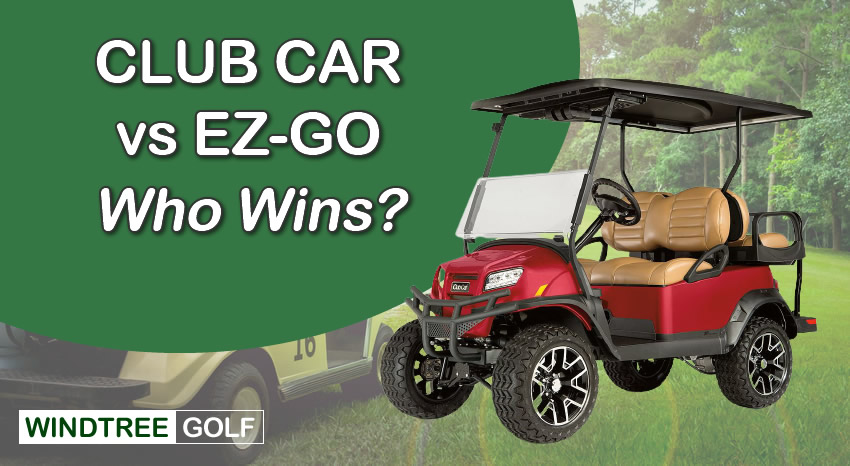 EZ-GO and Club Car are the most well-known brands in the business, and they have been manufacturing quality golf carts in the United States since the 1950s. The latest models are available with gas engines as well as electric motors. They also offer extensive customizability to ensure that they fit your needs well.

All golf carts are not built equal, so which one is right for you? This article compares some of the most important factors to help you make that decision.

What is the Main Difference Between EZ-Go and Club Car Golf Carts?

Both of the manufacturers produce good quality golf carts, but some important factors differentiate the two. The main difference between EZ-GO and Club Car is the type of frame used in manufacturing.

EZ-GO uses a steel frame for their carts. The upside of steel frames is that it is more rugged and can handle more abuse compared to the aluminum frame used in the Club Car golf carts.

But the downside is that steel frames will corrode at a much higher rate than aluminum. It is especially true if the carts are to be used in coastal areas.

Golfers may also like:  Cricket Mini Golf Cart Reviews: (Should You Use Them?)

But the features and better materials in the Club Car commands a premium price, and rightfully so.

The advantage of EZ-GO is the extensive aftermarket options available for their carts.

EZ-GO makes their carts relatively easy to mod using the plethora of options available on the aftermarket.

The replacement parts for the carts produced by the OEM are also cheaper for EZ-GO when compared to Club Car.

Club Car golf carts are equipped with loads of advanced technologies such as high-quality torque balancing and balancing hardware that helps the cart to remain perfectly stable even under extreme conditions.

The motors being employed to drive the carts are of superior quality compared to rivals. Performance on hilly terrains is particularly impressive.

It also provides a higher top speed as well as better acceleration.

The steering performance and tight turning radius are also quite commendable.

Club Car carts are also very comfortable to drive, and their reliability is well known in the industry.

Many courses have Club Car carts that are older than 20 years still being used to this day, and many higher-end clubs and resorts equip their cart fleets solely with Club Car carts for the same reasons.

All the advanced features and the higher quality materials used in the Club Car carts make them a few hundred to a few thousand dollars more expensive than carts from other brands, depending on the model. Individual buyers that buy carts for personal use might be deterred by the higher price.

All the features, the higher top speed, and acceleration take a toll on the battery life of the cart.

Even though Club Car equips its carts with bigger batteries that can handle the load, they still fall short when compared to other carts.

Also, many new buyers express their gripe with the design of the carts that have remained unchanged for a long time.

Features such as USB ports have been added recently, but the overall layout remains the same.

EZ-GO carts are the popular choice for people that intend to use them for golfing, as well as other outdoor activities such as hunting. That is made possible by the numerous aftermarket mods that are available for these vehicles to adapt to all kinds of terrains and conditions.

EZ-GO carts are also relatively cheap to buy and maintain as well. The replacement parts are cheaper compared to Club Car, and components such as batteries last longer.

They do not get as many features as Club Car carts, but they are equipped with several proprietary technologies such as Precision Drive System (PDS) and Intellibrake system.

The EZ-GO gets a bit more modern design with the central console housing all of the necessary controls and storage spaces in one place unlike the Club Car carts, which have them placed towards the sides.

What Needs Improving on EZ-Go Carts?

Over time, the steel frame can rust if it is not properly taken care of. If you live in a coastal area with above-average humidity, it is highly recommended that you apply some protection layer on the frame to prevent rust. Salt used to melt snow can also cause rapid corrosion.

Also, the motor may struggle a little when driving up inclines with a heavy load.

The performance on hilly terrains could greatly be improved upon. An aftermarket solution such as an upgraded controller and cables can address this issue.

Overall, is a Club Car better than EZ-Go?

It is hard to conclusively say that one of the models is better than the other. The Club Car carts have a better ride quality, so they are generally more comfortable. Their build quality is also good, and they are loaded with cool features.

Golfers may also like:  Golf Cart Auctions (5 Sites to Get the Best Deals! )

So if the price is not a problem and you intend to use it mostly on a golf course, then Club Car carts will be better for you.

On the other hand, the EZ-GO carts offer the ability to easily modify it to adapt to your needs, and the price is also relatively low.

Decide which one suits your needs and preferences to make the right decision.

Is Club Car Made by EZ-Go?

No, Club Car and EZ-Go are totally different companies. Club Car was established in 1958 in Houston, Texas, and was later moved to Augusta, Georgia when the company was bought by Bill Stevens Jr.

A group of EZ-GO executives, including EZ-GO cofounder William Dolan, bought the company in 1978 but was later acquired by Ingersoll Rand in 1995 and later by Platinum Equity in 2021.

EZ-GO was founded in 1954 by Beverly and Billy Dolan in Augusta, Georgia. It was later acquired by Textron Inc. in 1960 who has manufactured the carts ever since. So they are not owned by the same company.

Both of the manufacturers have been making quality carts for decades now, and whichever one you go for, you will end up with a great model that will serve you well for years.

Try to go for a test drive before making your decision as it can make a big difference. Both brands offer a super golf cart and are proud to serve the US public with high-quality vehicles for both the golf course and street-legal purposes.