If you’re a fan of professional golf, the chances are you’ve heard of Butch Harmon. He has coached some of the finest golfers in the world throughout the years and has even served as the King of Morocco’s personal golf instructor! 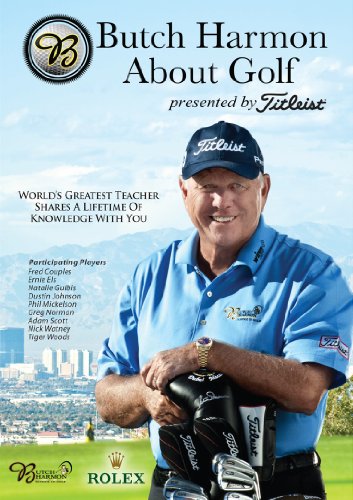 Since semi-retiring from the Tour, Butch offers insight into the professional game during live events and also provides lessons in Henderson, Nevada.

In this article, we explain everything you need to know about this legendary golf coach and show you how you can book a lesson with the one and only Butch Harmon.

Who is Butch Harmon the Golf Coach?

Butch Harmon is a renowned golf coach who has worked with some of the biggest names on the PGA tour throughout his career. He coached the legendary tiger woods between 1993 and 2004 before working with Phil Mickelson between 2007 and 2015.

Butch has also worked with other major champions, including Greg Norman, Ernie Els, and Stewart Cink, which has earned him the reputation as one of the finest and most celebrated golf coaches in the business.

He has been named by Golf Digest as the best golf coach in the road and has gone on to teach at various sites around the world, notably in Dubai and Las Vegas.

Since semi-retiring from golf coaching, Butch has excelled in various broadcasting roles and is often on the commentary team at major championships.

He has also authored a successful book entitled The Pro, which documents his experiences as a golf coach and relates some of the stories during his time with Tiger. As far as golf coaches go, Butch Harmon is the gold standard.

Yes, Butch Harmon turned professional in 1965 after playing collegiate golf at the University of Houston. As is the case with many golf coaches, he didn’t enjoy great success as a player on the PGA tour and was much better suited to a career of instruction.

In fact, his only success as a PGA Tour professional came in 1971, when he won the Broome County Open. He stepped down from the PGA Tour a year later and moved to Morocco, where he spent a considerable amount of time during the 1970s.

He served as a personal golf instructor to King Hassan II during this time before moving back to the United States to pursue his career in golf coaching further. He then worked as a club professional in the US, based out of Crow Valley Golf Club in Davenport, Iowa.

Related Article  Golf Classes for Beginners? How to Get Started in 7 Steps!

Butch’s first big-time client was Greg Norman, who he coached during the early 1990s. It was during this time that Norman reached the pinnacle of his success, and it was largely due to Harmon’s instruction that he won so many times on the PGA Tour.

Can I Get a Lesson with Butch Harmon?

Yes, you can book a lesson with Butch Harmon and his team by enrolling in one of his golf schools. Widely regarded as the #1 golf instructor in the world, employing Butch Harmon as your golf coach is surely going to be good for your game!

Butch is currently instructing at Rio Secco Golf Club in Henderson, Nevada. You can currently schedule one, two, and three-day clinics with Butch, and you can also make arrangements to have Butch come and teach during a corporate day.

You can also book a lesson with Butch’s instructional team, including the likes of Vic Wilk, Nick Helwig, and Don Callahan. Most golf packages include accommodation and transfers and are more of an experience than just a golf lesson.

But how much does it cost to get a lesson with golf’s most celebrated teacher? Let’s find out.

How Much is a Lesson with Butch Harmon?

A two-day golf lesson package with Butch Harmon and his staff currently costs $5,000 per person. However, you get so much more than a lesson, and the package includes:

You can schedule lessons with Butch on specific dates throughout the year, and he’s not available to teach 100% of the time as he has a busy schedule.

So, if you’re interested in being coached by the best golf instructor in the world, it’s best to book in advance so you can get in on a date that works for you.

What is Butch Harmon’s Power Joint?

The power joint, also known as the power drive is one of the fundamentals of Butch Harmon’s teaching philosophy. This method encourages golfers to stop standing away from the ball to get more power, which is a mistake that people can make when they’re trying to add distance to their tee shots.

Butch argues that when you extend your arms, you bend over more, which causes the clubhead to swing across the line from out to in.

In most instances, this will cause you to slice the ball, which will result in less distance and control.

Therefore, Butch recommends setting up to hit a draw by relaxing your arms and taking a closed stance.

He compares his power drive technique to a “big sweeping forehand in tennis,” which enables you to sling the club through the ball and rotate your right arm over your left.

Related Article  Up and Down in Golf - What Does it Exactly Mean?

When you watch any of Butch’s instructional materials, you will discover that the power joint is one of his most important teachings, and it helps recreational golfers hit the ball further off the tee.

How Do I Start the Butch Harmon Downswing?

Your downswing will influence how well you hit the golf ball; it’s as simple as that. Butch instructs recreational players to get their weight moving to their front foot as soon as they move down towards the ball.

This bump will drop your hands and arms to the inside, which will enable you to generate more power and move through the ball at speed. Lots of recreational players forget to shift their power through the downswing, which is why it’s such an important tip.

Butch also focuses on the speed of the backswing. He encourages players to take the club back slowly before accelerating into the downswing. If you’re too fast in the backswing, it will send your downswing out of sync, which is a mistake that so many recreational golfers make, particularly off the tee.

Who Has Butch Harmon as their Current Coach?

Butch Harmon doesn’t currently coach anyone on the PGA Tour and works at the Rio Secco Golf School in Nevada. However, he has coached some of the biggest names in golf over the years, which has enabled him to cement his place as one of the best golf coaches of all time.

He coached Tiger Woods at the height of his success before instructing Phil Mickelson, Ernie Els, Stewart Cink, Davis Love III, Fred Couples, and Justin Leonard. Latterly, he coached Jimmy Walker and Rickie Fowler before semi-retiring from the Tour.

As explained above, Butch now offers private instruction at different times of the year and is a highly respected broadcaster, often commenting on the biggest golf tournaments in the world.

So, while Butch doesn’t currently offer his wisdom to players on Tour, there’s no doubt that he still provides advice and counsel where it’s requested. After all, he’s a legendary figure in the game, and he has worked with the biggest players in the game over the past three decades.

Although he didn’t excel as a player, Butch Harmon is undoubtedly one of the most celebrated and successful golf coaches of all time. The driving force behind Tiger’s success in the nineties, Butch has worked with the finest players on the PGA Tour throughout his career.

Thanks to his teaching clinics in Henderson, NV, you can now schedule a lesson with the legendary Butch, which will undoubtedly correct some of the issues that you experience with your game.