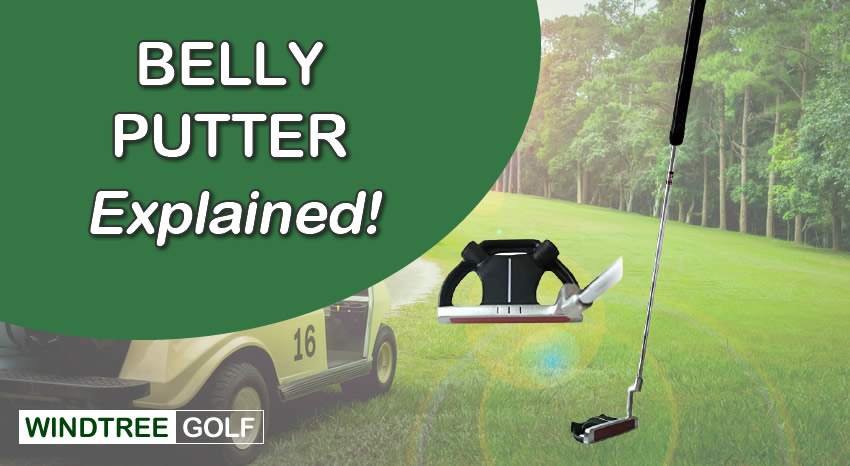 One of the best things about the game of golf is that there are so many different types of clubs for players at all levels of the game to use.

And since the 1960s, belly putters have been an option for players who have struggled to use conventional putters.

But what’s the deal with belly putters? Are they legal? And should you use one?

To help you decide if a belly putter is right for you, we explain everything we know about these unconventional putters and give you an insight into why they might help your putting game.

What is a Belly Putter?

A belly putter is longer than a conventional putter and was historically anchored to the midsection, reducing wrist action and making putting easier for many golfers. But in 2016, the USGA and R&A moved to change the rules on belly putters, making it illegal to anchor them to the body during your putting stroke.

While this affected their popularity, belly putters are still used by recreational golfers and pros alike today.

To answer the question directly, it’s fair to say that belly putters are good for some players and not for others. They take a lot of getting used to, but when a golfer perfects the movement required, belly putters can improve your accuracy on the green.

For many golfers, belly putters are a much better option than standard length putters. Belly putters have been around for more than thirty years, and it’s widely agreed that they make putting easier.

This is because they rest against your midsection as you’re putting, which minimizes wrist action.

When Keegan Bradley won the PGA Championship in 2011, he became the first pro golfer to win a tournament with a belly putter.

The likes of Webb Simpson and Adam Scott have also enjoyed success in the professional game with a belly putter in the past, owing to the additional control afforded by using a longer shaft.

Golfers who have used belly putters opt for them because they swing like a pendulum.

When executed in a controlled manner, this makes the putting stroke much more balanced and considered and ensures continuity in the putt.

For many, this means more putts end up in the hole, and less are skewed by the jolt of the wrist.

Yes, belly putters are still legal. But on January 1st, 2016, the USGA and R&A enforced a new rule regarding the use of belly and anchored putters, which prohibits anchoring a club when making a stroke.

Therefore, belly putters are still perfectly legal, but players are no longer allowed to anchor them against their bodies when executing their strokes.

Related Article  Putter with Loft – 7 Facts You Should Know!

So, whether you’re playing in a recreational game with your buddies, in a club competition, or even competing as a professional, you can still use a belly putter.

Here is a video explaining the putting anchoring ban:

You are just prohibited from anchoring it against your midsection.

The new rule came as a shock in the world of golf, and it very much split opinion in the game.

Golfing purists have long asserted that belly putters provide an unfair advantage (even though everyone can use them), while the likes of Webb Simpson, Ernie Els, Adam Scott, and Keegan Bradley all agree that they were fundamental in helping them secure major victories.

Whatever your opinion on belly putters, the fact that they’re still legal means you are permitted to carry them in your bag.

You just have to alter your setup to ensure that your belly putter isn’t intentionally anchored to your stomach.

Why Did They Ban the Belly Putter?

Although belly putters aren’t banned, the reason for the rule revision is mainly due to the outcry from professionals and those associated with the game of golf at the highest level.

Mike Davis, the executive director of the USGA, wasn’t happy when Keegan Bradley won the PGA Championship with a belly putter, and it was this that set the rule revision in motion.

In the lead-up to the rule revision, Ernie Els and Adam Scott spoke out against the proposals and were concerned about what it meant for the game as a whole – not just at the elite level of the game.

With both viewpoints considered, it’s appropriate to say that the rule revision is somewhere in the middle.

Belly putters are still permitted; players are just required to putt with their hands away from their bodies and can’t anchor the putter against their midsection.

What is a Belly Putter Length?

A belly putter is anywhere between 41 to 44 inches, while a long putter is 48-52 inches long. When you consider the fact that conventional putters are generally 30-36 inches long, belly putters are considerably longer than what is considered the standard putter length.

The long putter has been around since 1961, and it was designed by Richard Parmley. In 1966, Phil Rodgers became the first professional player to win on the PGA Tour with a belly putter, at a length of 39.5 inches.

Since then, the belly putter has evolved over time and has been widely used on the PGA Tour.

In 2000, Paul Azinger used a belly putter to win the Sony Open in Hawaii, which sparked a chain of wins for belly putters from the likes of Vijay Singh and Steve Flesch.

Now that belly putters can no longer be anchored to the midsection; it’s incumbent on golfers to select a putter that is an appropriate length and can be played out in front of the body like a conventional short stick.

What About Belly Putters Shaft Types?

Just like conventional putters, belly putters can be equipped with various shafts, depending on a golfer’s preference. The most prevalent putter shaft types are split into 4 main categories.

Related Article  Bettinardi Putters Review: The Best You Can Get?

As you will be aware, there are so many things to consider when choosing the right putter for your golf bag.

But if you’re opting for a belly putter, you will need to ensure it has a shaft that is conducive to your putting stroke.

You can always try out various putter shafts at your local golf store before deciding on which to go for.

Equally, paying for a putter fitting will ensure you have a putter that is best suited to your putting style, whether it’s a belly or conventional short stick.

Are There Still Belly Putters for Sale?

Yes, you can still buy belly putters, both new and second-hand. Remember, they weren’t outlawed by the USGA and R&A – the rules were revised on how they can be used. Granted, this has affected the popularity of belly putters, as many players found it much easier to putt with an anchored putter.

But if you’re keen to try out a belly putter and are happy to conform to the USGA regulations in regard to its usage, you can still pick up various models online.

You can buy belly putters from Odyssey, Cleveland, and Wilson Staff, as well as various other brands.

A good place to start your research is somewhere like eBay or Second Swing, where you can find a broad range of used belly putters that are in great condition.

Just remember, you’re no longer allowed to anchor a belly putter to your midsection, so you will have to practice your putting stroke to ensure you can use your belly putter legally out on the course!

Use a Belly Putter but Do Not Anchor!

Before 2016, belly putters were used by some players to gain an advantage out on the putting surface.

The fact that you could anchor a belly putter to your midsection made it easier for many to maintain a true and consistent putting stroke, reducing the impact of wrist action.

But now that the rules of golf have been amended, belly putters are nowhere near as common.

So, with this in mind, if you add a belly putter to your bag, make sure you can play it without anchoring it to your body, or you will be using it illegally.